The 10 Things You Need To Know About Traditional Caruru

I accept invitations for caruru!

Health, prosperity and abundance. Caruru is a symbol of joy and renewal 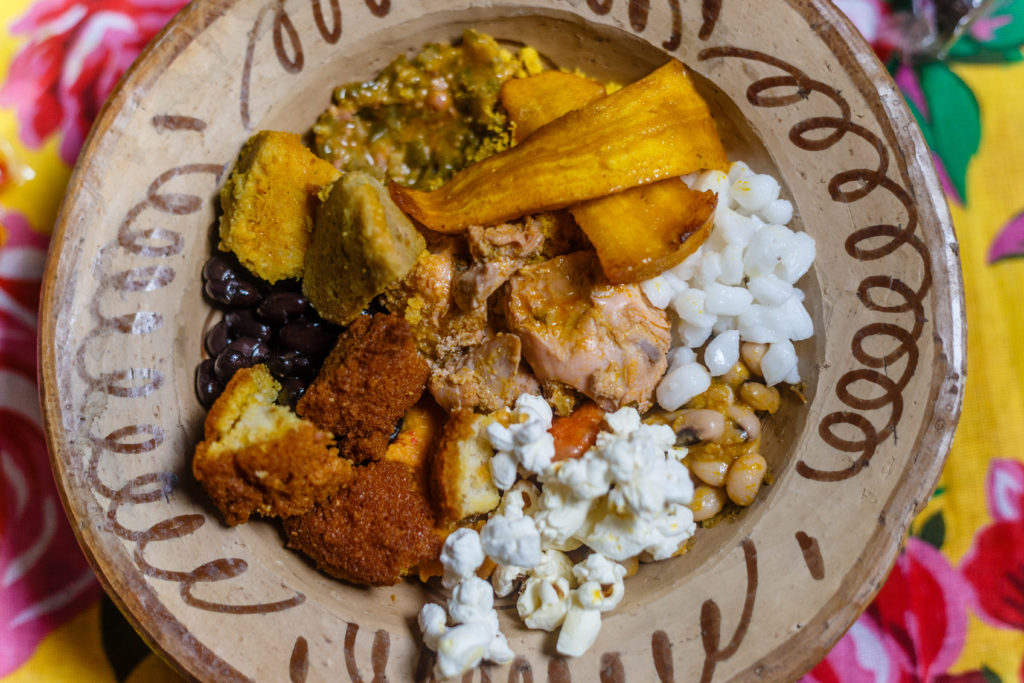 Food has a transforming power. Gathering people at the table symbolizes congregation and bonding. In Bahia, September is especially marked by this feeling of sharing and celebrating. It is the month of Caruru, a recipe that is a mix of food and affection, culture and history. The Bahian cuisine is pure indigenous, African and Portuguese cultural-gastronomic syncretism. The caruru is part of it, food full of meanings and ancestry.

The caruru is offered at the celebrations of St. Cosmas and Damian Day on September 27. It permeates all socioeconomic classes and has no religious boundaries. We have gathered curiosities that will tell a little of this story. Get ready because after reading, you’ll write on your timeline: “I accept invitations for caruru”, and will start receiving calls from friends. Besides delicious, your meal will now become a gastronomic immersion.

According to the book “Cozinhando Histórias – Receitas, Histórias e Mitos de Pratos Afro-brasileiros” (Cooking Stories – Recipes, Stories and Myths of Afro-Brazilian Dishes)*, many of the Afro-Bahian dishes served today – especially on celebrations – and restaurants have their origins in candomblé religious foundations.

St. Cosmas and Damian are Catholic saints syncretized with the Ibejis twins of Candomblé, to whom caruru is offered. Thus was born the September tradition of offering the “complete caruru”, a banquet in which, besides the caruru, several other dishes are served, including: acarajé, abará, chicken xinxim, mulukun, vatapá, milk beans, ahauçá rice, white corn, oguedê, olive oil farofa, popcorn and sugar cane in pieces.

In the same book, researcher and photographer Josmara B. Fregoneze, Afro-Brazilian culinary expert Marlene Jesus da Costa and griot Nancy Sousa, better known as Dona Cici, tell about the Caruru Myth. In short: every time Xangô went to eat his amalá (food similar to caruru, but with meat and pepper), Exu Ijélú would come and steal his food. Xangô got so angry that he made the earth shake, sending lightning everywhere. So, Xangô’s twin sons, the Ibejis, offered to solve the problem.

One of them proposed a challenge for Exu: a dance dispute in which if Exu stopped dancing before him, he would never eat his father Xangô’s food again. Exu, king of the dances, didn’t even think twice and accepted. Exu didn’t know they were twins and when the dance started, whenever one of the twins got tired, the other replaced him immediately, without Exu noticing. The brothers took turns playing the Batá (African percussive instrument).

This lasted for a long time until Exu fell exhausted and lost the challenge and never ate Xangô’s amalá anymore. As a reward, the Ibejis asked that whenever there was amalá to eat, a portion was prepared without pepper and meat for them. 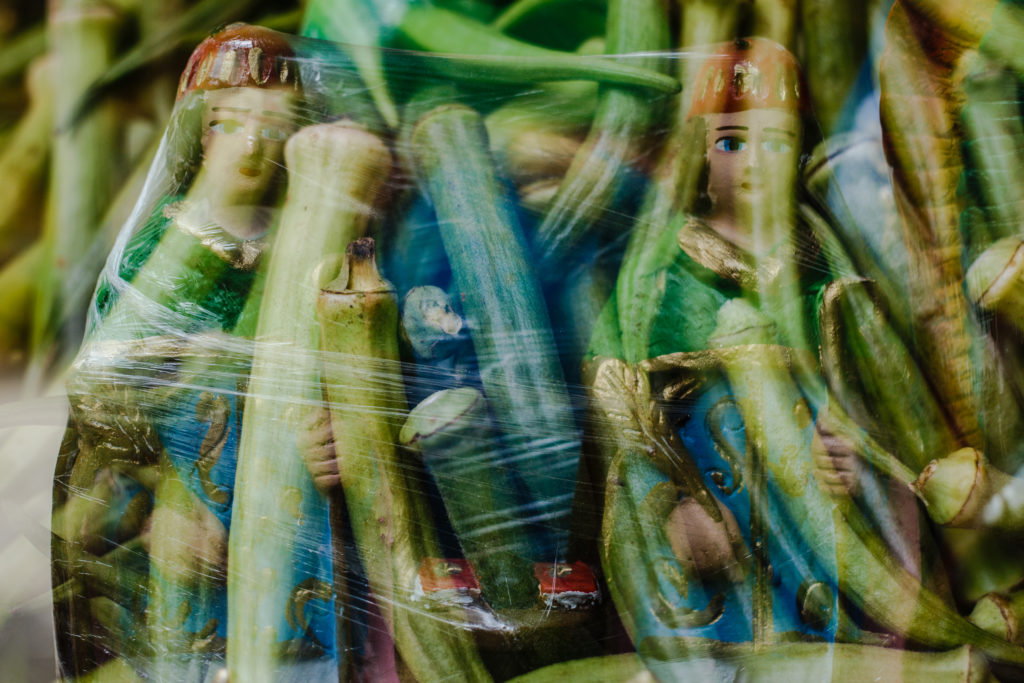 For this reason, for those who have faith, the caruru is an offering called the “caruru of promise” or “caruru of the seven boys”. In memory of the event where the Ibejis deceived Exu, every year, the Ibejis are honored with the caruru. The book tells that all the orixás participate in this party and their food is also served.

The okra is for Xangô; black beans and popcorn for Omolú; the fried banana for Oxumaré; the acarajé is for Iansã; the abará and mulukun for Oxum and the cooked yam for Oxalá.

In this case, it is first served to the saints, then to the seven boys who eat together with their hands, and then to everybody. They represent the Ibejis, Taiwo, Kehinde, Idhoú, Alabá, Talabí, Adoká e Adosú. Also known as Cosme, Damião, Doú, Alabá, Crispin, Crispiniano and Talabi.

Ibeji is the Yoruba word meaning twins – “Ibi” means born and “eji”, two. The first twin is named Taiwo and the second, Kehinde.

Ibeji are children who enjoy games and sweets, who bring harmony and happiness to their environment. They are sons of divinities Xangô and Iansã, and are also worshiped as divinities. They are syncretized with Saint Cosmas and Damian.

5 – Don’t get confused on the dates: Cosmas and Damian’s day is September 26th

In the Roman Apostolic Catholic Church, the celebration of St. Cosmas and Damian is September 26th. The day on which most caruru parties take place is September 27th. Syncretism is believed to exist only because both religions celebrate twin brothers.

In the Catholic religion, Cosmas and Damian were doctors and lived in Asia Minor. Their holiness is attributed to the fact that they practiced medicine without charge, devoted to the faith, and performed miracles provided by their prayers. They died around the year 300 AD, victims of a persecution of the Roman emperor Diocletian. They are the patrons of pharmacists, doctors and medical schools. 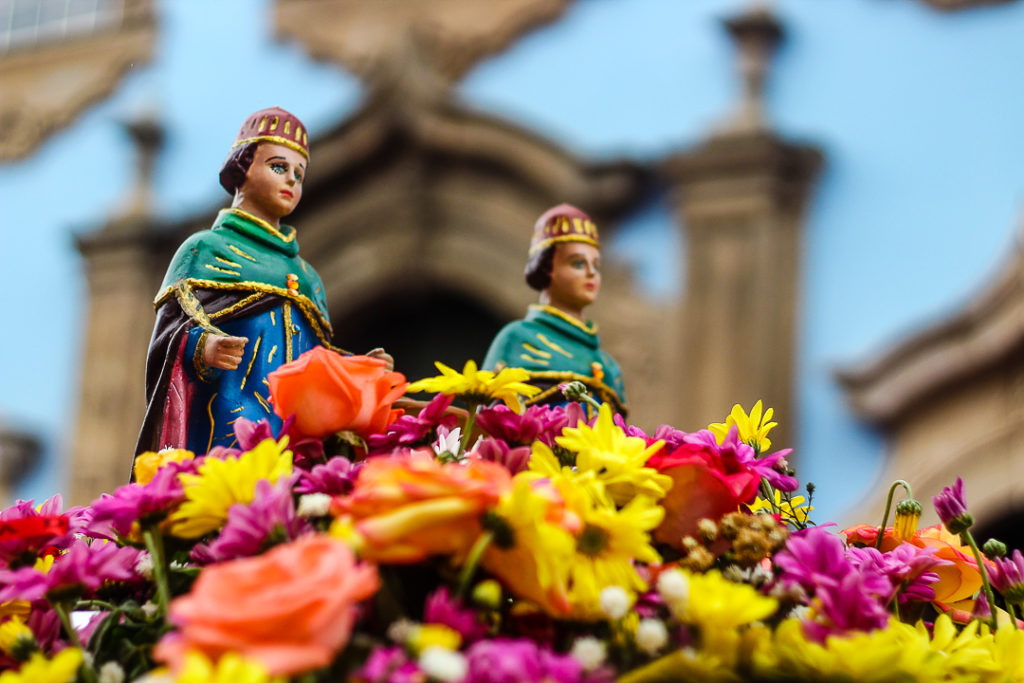 Definitely, giving a caruru is giving affection. This warm food is meant to be shared, being a request for health, prosperity and abundance. Offering caruru to many people is to attract joy and renewal.

For this reason, besides September, the Bahians in particular have the tradition of celebrating baptisms and birthdays offering a caruru to the guests. The desire is that child joy always exists in you, and that happiness will remain in you the rest of the year.

Every year, on December 4th, in Salvador, the Feast of Santa Barbara and Iansã is celebrated. The streets of Pelourinho are taken by the red color, used in the devotees’ clothing and also in the flower petals that cover the floor where the procession goes. When the image of the saint passes in front of Filhos de Gandhy headquarters, acarajé, the food of Iansã, is offered.

It all starts very early with an outdoor mass in Largo do Pelourinho, from where the image comes from the Church of Our Lady of the Rosary of the Black People in procession to the Barroquinha Fire Department barracks. And this party can’t run out of caruru. Among the most traditional carurus there are the one at Santa Bárbara Market and the one at São Miguel Market, with Filhos de Omolú.

There are some interesting traditions:

1- The recipe is made with okra cut in small pieces. Tradition says that anyone who finds an entire okra on the plate should offer a caruru next year.

2- Traditional caruru is served in clay nagés, a ceramic bowl commonly used for food offered to orixás. After eating, the used nagé cannot serve anyone else.

3- Who offers the caruru must cut the first okra and, when ready, put the food at the feet of the saints in new containers and make a wish.

4- The chicken used for the xinxim cannot be bought dead. The person who cooks should cut the animal.

For those who have already written in the networks the phrase “I accept invitations for caruru” but hasn’t been invited to eat the caruru in anyone’s house yet, we suggest three very cool places to eat the darling dish of September.

In Casa de Tereza restaurant, in Rio Vermelho, there is an option called “Banquete dos Ibejis”. It comes with: acarajé and abará, vatapá, vinaigrette, xinxim, cowpea, caruru, rice, palm oil farofa and fried banana. For dessert there is also tapioca ice cream with rapadura syrup. Everything is delicious.

If you are looking for an immersive experience, our tip is to go to one of the most classic carurus in the city, at Mercado das Sete Portas, in Salvador’s Nazaré neighborhood. This caruru has been offered there for over 20 years, is free and can serve around 700 people. The Chapéu de Couro stand – which sells artifacts, leaves and images of the sacred rites – starts serving from noon on. Take the opportunity to talk to André Nery, the merchant and babalorixá who has many stories to tell.

Address: Chapéu de Couro stand. Sete Portas Fair, Box 82, Nazaré. On September 27th, from 12:00 pm on. Important: The market is currently being refurbished, so it may be more complicated to move around.

10 – Where to buy the ingredients 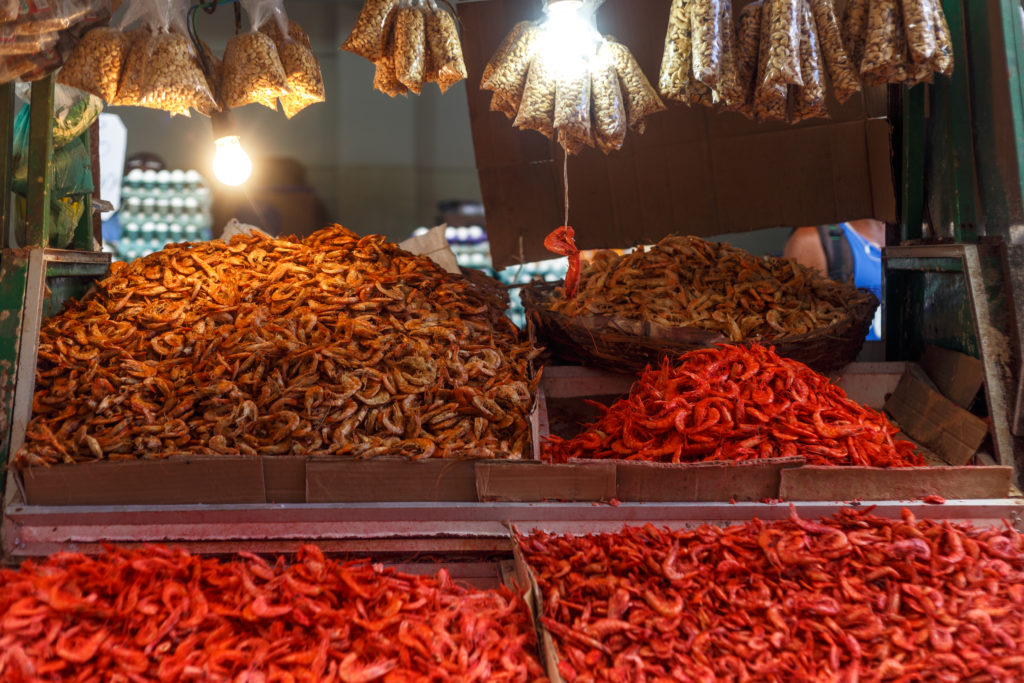 Feira de São Joaquim is the largest free fair in the city of Salvador. Besides food, it is the main distributor of clay handicrafts (pots produced in the Bahia recôncavo), and place to sell products for candomblé rituals, such as the clay nagés mentioned above. This fair is also the darling place for photographers eager for everyday images of an original Bahia, full of characters and workers who represent the majority of this land’s people. Ingredients such as pepper, dehydrated shrimp and objects such as beaded necklaces, baskets and African fabrics make the colors of this place a symbol of a real Salvador.

Besides having a structure to sell fair products such as fruits, vegetables and meat, Itapuã Municipal Market also has restaurants and space to exhibit local crafts. It has three floors, with a total of 54 boxes, which house from modern sea-view restaurants to shoemakers, bars, artisans, grocers, fishmongers and farm products. Take advantage of the tour to meet other interesting points in the neighborhood. See everything in this link