Three drinks that have become practically symbols of the city 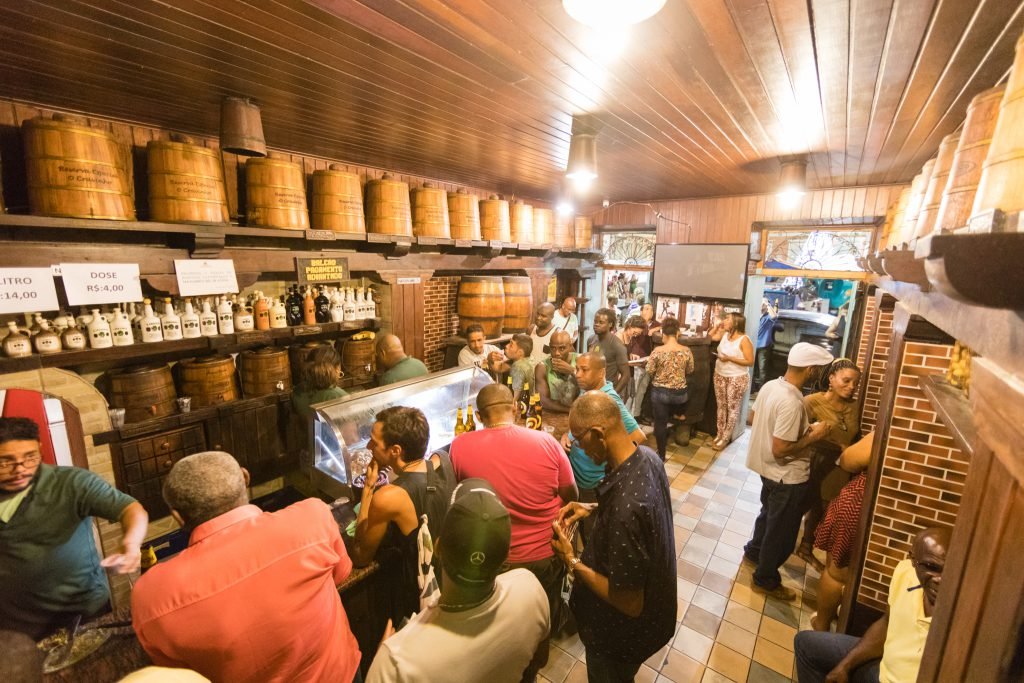 In all seasons, many drinks are launched around the globe. Modern drinks, usually reinventions of recipes created in the last century. For some years now, the trendy drinks have been Aperol Spritz, Gin tonic, Moscow Mule and Negroni. Around here, the drink that never goes out of style is the caipiroska, better known as roska. Each tent, bar or restaurant in Salvador has a more creative “mixologist” than the other, coming up with a better roska. Visitors go crazy with seriguela, umbu and cajá roskas.

In Bahia, there is a history of drinks that have become famous both for their ingredients and for their irreverent names. This is the case of Capeta (which in Portuguese means “devil”), hit of the 90s, made with condensed milk, guarana and cinnamon powder, vodka, pineapple and whatever else is at hand. Going back in time, we have the Príncipe Maluco (which means Crazy Prince), a (secret) mix of vodka, brandy, whiskey, cachaça, guarana powder, cinnamon sticks and powder, cloves and other delicacies, and a slice of lemon. This one did so much “damage” that it’s forbidden to be sold at popular parties and squares nowadays.

But there are those quirky Salvador drinks that are always in vogue. Time goes by and they remain present at parties, concerts and in the memory of visitors who count the days to return to the city to take the Soteropolitan infusions again. Here we tell a little about some of the three drinks that have become practically symbols of the city. 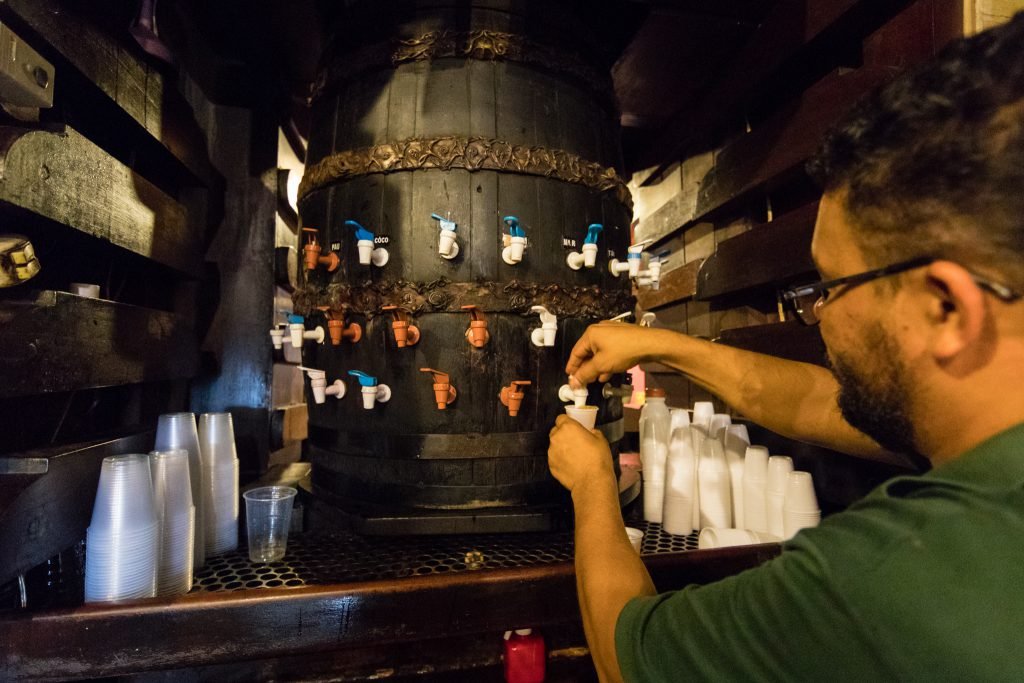 There might be no party at Pelourinho where cravinho is not present. A trademark of the street parties, the cloves and cinnamon bring a very full-bodied taste and aroma that mask the presence of alcohol, which is a danger. There are 3 iconic places that produce cravinho. It is even worth taking a “cravinho tour” before choosing your favorite.

One of the most famous is the bar with the same name of the drink, which is located in Largo Terreiro de Jesus. The tavern-style bar is one of the Historic Center sensations, and in addition to the drink, it also serves a famous gizzard.

Going down João de Deus Street, at number 18, there is a mandatory stop for the infusion lovers. O Cravinho do Carlinhos, besides excellent options, has a great menu of “bar snacks”.

But if you want the “root” cravinho you have to go to Cravinho Preto Velho, in front of Filhos de Gandhy headquarters, at Maciel de Baixo Street, number 38. Created in the 70’s by Domingos Lemos, better known as Domingos Preto Velho (1922 – 2013) it was probably Salvador’s first cravinho.

“This was the first (cravinho) in Pelourinho. He invented it in the 70’s, but became very famous in the 90’s”, says Adailton Moraes Araújo, Domingos’ nephew.

Devotee of Preto Velho, Domingos died November 20, on Black Awareness Day. He was known for being a good advisor. His store was the meeting place for young people who had him as a reference. “Those who passed at Domingos didn’t go the wrong way”, jokes Armando Castro Filho, Tourism Guide who has frequented the bar since his youth.

Adailton and Armando report that Cravinho Preto Velho had famous frequenters such as Gilberto Gil, João Durval Carvalho and Pierre Verger, and Domingos had a great relationship with Antonio Carlos Magalhães (there is a big picture on the bar wall, with the image of one of their encounters at Pelourinho).

There, you need to taste the classics: Jatobá; the cravinho; the Moicana, aged in Umburana wood; 7 herbs, with a mixture of secret herbs in an infusion; Gabriela Cravo e Canela; and Ginger with Lemon.
And speaking of ginger, this is the sensation of the moment in the city! 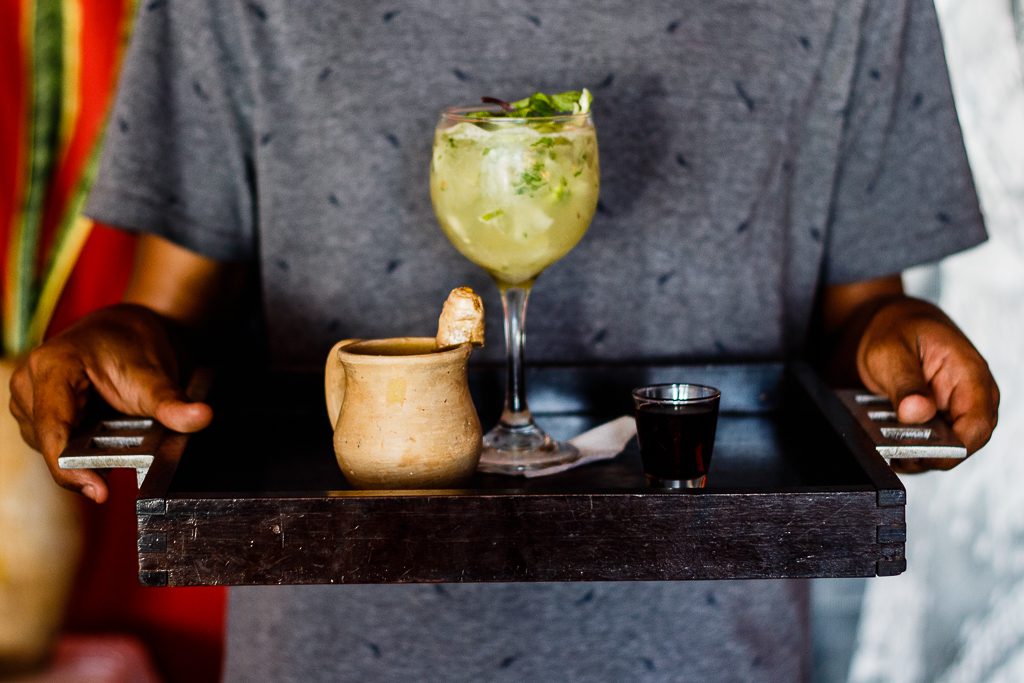 For three years now, there has been no party without the gengibrinho. If Pelourinho is synonymous with cravinho, Santo Antônio Além do Carmo is the “home” of the ginger drink. There are bars, restaurants and parties irrigated by this root. This is the case of the Zanzibar restaurant, which specializes in African food. They serve an ancestral version of the drink in a clay cup. It’s worth the full experience.

The brand Nectar, which emerged in late 2016, and became quickly known at Iemanjá Feast, on February 2, is nailing it! Ricardo de Freitas Correia, the brand’s owner, says that the place that sells the most is the Oliveiras Bar, in Santo Antonio Além do Carmo. It’s also present in Restaurants Poró and D´Venetta. In Rio Vermelho neighborhood, you can find it in Le Bowski Pub and Commons Studio Bar. In Barra, it’s in Boteco do Zuca, near Farol da Barra, and in Campo Grande, it’s in the bar Quintal.

“This formula is from my mother, she has been doing it for years. The way to manipulate it to make the Nectar is a secret, a witchcraft of hers (laughs)”, explains Ricardo.

Even so, he told us what’s inside the bottle: “It’s a mixture of the in natura ginger root, Sergipe’s sugar cane rum, seasoning with lemon and the raw sugar syrup, which looks like sugarcane syrup and it’s what takes the acidity away. I don’t use anything industrialized, the whole process is done by hand”. 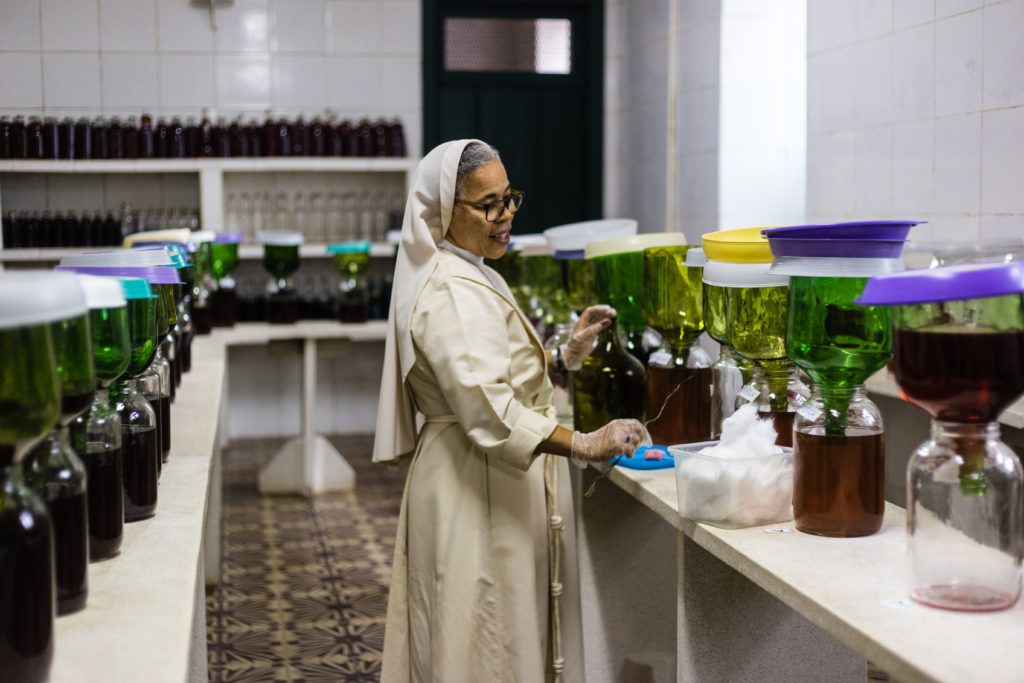 Those who have already spent the June parties in Bahia know that a good liquor has its place. The most famous are the liqueurs of Cachoeira, in the recôncavo and those of Amargosa, in the country side. But in Salvador there is a very interesting story: the liqueurs of the Franciscan Sisters of the Sacred Heart of Jesus. And the best of all: they are sold all year round!

Santa Clara do Desterro Convent, in the city center, is the oldest monastery in the country, founded in the 17th century. As if the historical importance was not enough, the nuns made the place one of the main points of liquor production in the city. The “lab” is the most beautiful thing. There, the sisters produce 23 flavors of the distillate with great affection. That must be the reason why it’s so good.

The convent store is called São José Confectionery, and there are flavors for sale such as anise, lemon, passion fruit, cocoa, pitanga, mint, fennel, cinnamon, guava, star fruit, guaco, cashew and jabuticaba. They also produce biscuits and candied fruit sweets, such as genipap. By the way, genipap and rose liqueurs are among the best sellers.

“Success is working with great care and joy. It’s to put love above all”, says Sister Aparecida.