A tribute to one of the symbols of our culture 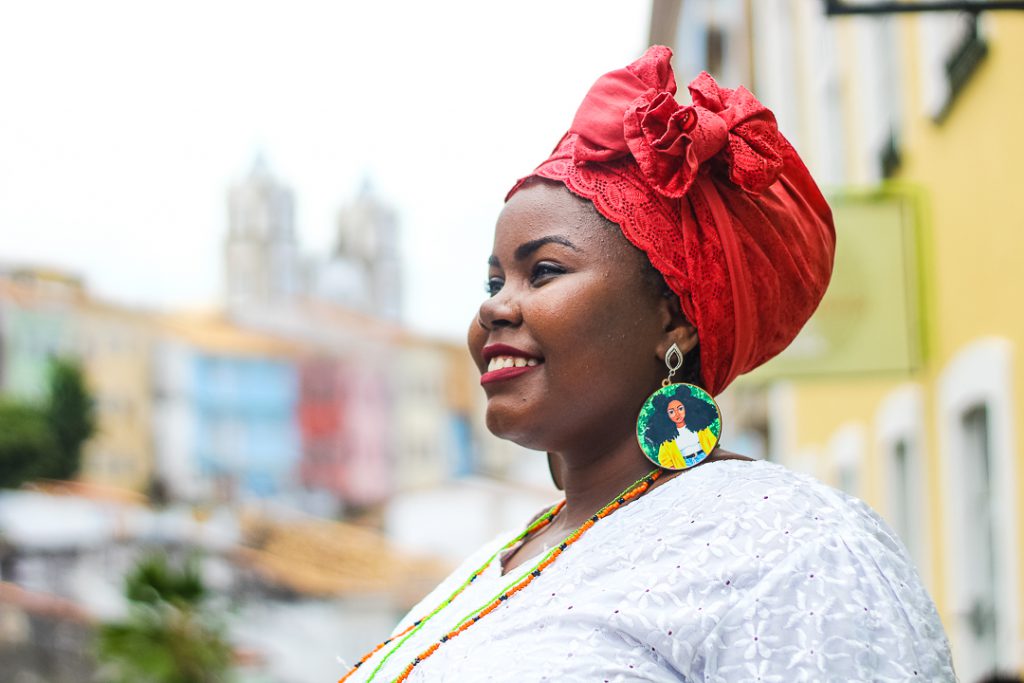 The National Day of Baiana de Acarajé is celebrated annually on November 25th. A tribute to the historical and cultural importance of the figure of the baiana de acarajé, the name given to the women who are dedicated to the production and sale of this typical Bahia delicacy.

In 2005, the craft of baiana de acarajé was registered as Intangible Cultural Heritage of Brazil. This title not only recognizes the importance of this popular figure for Bahian culture, but also preserves the traditional practice of production and sale of Bahian food on trays in the streets of the cities.

The baianas de acarajé are the historical and affective memory of Bahia. They are the ones who present the city, customs and flavors of Salvador. Visit Salvador da Bahia prepared a true immersion in the history, customs, clothing, religion and symbols associated with the baianas.

The date symbolizes the recognition of the importance of the African ancestors’ legacy in the historical process of our society formation and its heritage value as a universal cultural complex.

Wherever you go, they will be there. It is common for a baiana de acarajé to be the first person with whom a visitor has contact when arriving in Bahia. It is a traditional practice of production and sale, on a tray, of the so-called baiana’s foods, made with palm oil and linked to the cult of the orixás, widely disseminated in Salvador. The acarajé, prepared by hand, originated in the Gulf of Benin, in West Africa and arrived in Brazil with the knowledge of enslaved black people.

The famous acarajé carries doses of joy and ancestry. In addition to providing food and support for several families, it has an important symbolic character.

The trays taking the streets

The President of the Executive Council of the National Association of Baianas de Acarajé, Porridge, Reception and Similar (ABAM), Rita dos Santos, explains:

“It all started in the symbolic. Enslaved women sold acarajé to buy manumissions. In the second stage, it was the baianas going to the streets to sell the acarajé to do their duties in the terreiros, usually the daughters of Oiá (it couldn’t be just anyone). Over time, it was seen that, with that dumpling, she could support the family, that’s when the acarajé went out to be commercial. It’s commercial, but in my mind it’s still symbolic because it’s still part of the terreiro, it’s still sacred. The acarajé is an offering to Iansã and the abará is an offering to Xangô”.

Rita says that, in the beginning, all the people who produced and sold acarajé were initiated into candomblé, a practice restricted to women, in general “filhas de santo” (daughters of saint) dedicated to the cult of Xangô and Oiá (Iansã). To fulfill their “obligations” with the orixás, during the colonial period, the free black women, or black women of gain, prepared the delicacies and went out into the streets at night to sell them, giving rise to this custom. Until today, the vast majority of baianas de acarajé only go to the street after 5 pm.

According to griô Nancy Sousa, better known as Dona Cici, this time of transition from enslaved human beings to free beings has a lot to do with the history of the baianas de acarajé, as it was the way to earn money. In fact, she says that the way that some of the headscarves and turbans were wraped on the baianas’ heads meant the nation they were part of.

On a daily basis, most baianas sell their delicacies with simple white clothes. The so-called “gala outfits” are more used on days of popular festivals, processions and in reception. They still get “pano da costa” (an integral part of the baianas clothing worn over the shoulders), and today they even added shiny cloths, in addition to the traditional fig signs, larger necklaces, bracelets and rings.

The baianas’ clothes also bring together visual elements from the baroque of Europe through its many embroidery and lace. It is a multicultural garment, of palm oil, which involves several elements such as the starched cloth, the traditional richelieu, the scent of lavender, fig sign and conch earrings, added to the baiana’s cheerful way of being.

On the baiana’s tray there is…

The baiana’s tray must have: acarajé, abará, vatapá, caruru, shrimp, salad and pepper, as well as cocada, bolinho de estudante and passarinha. But even so, all this is at the discretion of each baiana. Rita Santos explains that, chronologically, in the beginning, only the “dumpling” with pepper was sold. Then, vatapá and shrimp were added. Caruru and salad became a custom around 30 years ago. That’s why some baianas don’t sell these last two add-ons, because they don’t think it makes sense.

“I would like to recover other things that used to be on the trays, such as pé de moleque, fish, acaçá, grandma’s cassava flour, there were many other things on the baiana’s trays in the past”, says Rita Santos.
Discover the curiosities of acarajé on this link.

A mother to daughter craft

The activity of production and trade of the delicacy is predominantly female, and is found both in public spaces, mainly squares, streets, city fairs and seafront, as well as in square parties and other celebrations that mark the city’s culture.

The baiana point is licensed by the City Hall, so it cannot be sold to another person, being passed on from mother to daughter. But, even before all the legalization of the craft, it was already a tradition for the tray to be passed on to a family member. Two well-known baianas are examples: Dinha and Cira, in Rio Vermelho, and another one, Tânia Bárbara Neri, in Farol da Barra. Learn these and other stories at this link.

But, as every rule has its exceptions, many baianas did not have a daughter, but a son, and the children followed in their mother’s footsteps, as this is a family profession.

Nowadays, it is not a rule that they are Candomblé people either. The baiana may even be of another religion, as long as she respects the tradition and that she follows the National Historic and Artistic Heritage Institute (IPHAN) decree, which says that the baianas must be on the street in a gown, skirt and headscarf and the tray must be organized. The beads and earrings are also allowed by the health surveillance.