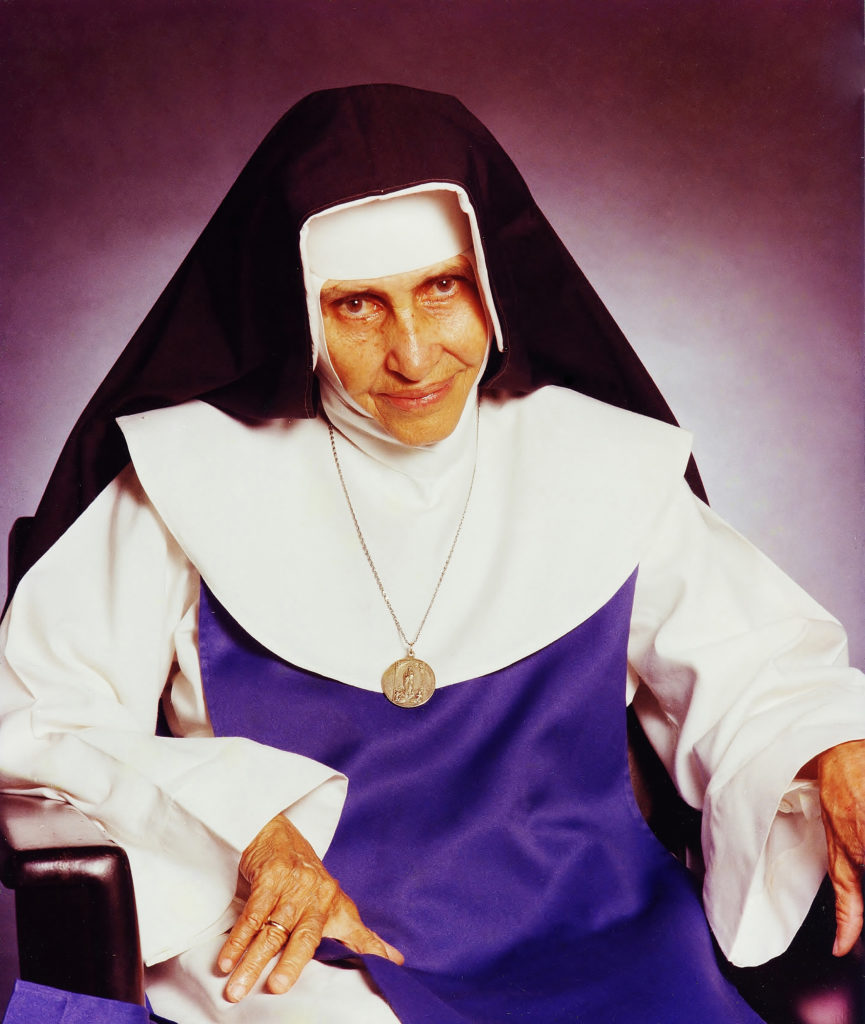 Sister Dulce (1914 – 1992) was a woman of few words. But she knew, at the right time, how to touch hearts and get some help for those most in need. If Saint Dulce of the Poor were alive, she would turn 106 in May 2020. She used her fame and religious strength to attract “travelers” to Salvador. From the simplest pilgrims from Bahia hinterlands to the presidents, and even religious who today are saints, many wanted to see The Good Angel of Bahia up close.

When she was still called Maria Rita de Souza Brito Lopes Pontes, before becoming a nun, she left Salvador and went to be a novice in the city of São Cristóvão, in Sergipe. However, in 1933, after completing her novitiate, she asked to continue her missionary work in the capital of Bahia. She did so until the day she died, on March 13, 1992.

For over 60 years dedicated to charity, Dulce was an “ambassador” of the faith and also of the city. She managed to attract the attention – and the presence – of powerful politicians and religious to Salvador. Just to give you an idea, while she lived, Sister Dulce went through the management of 53 mayors of Salvador, 28 governors of Bahia and 26 presidents of the Republic. Right-wing, left-wing, center and military governments. To all of them, without exception, she asked for help. “My policy is to love your neighbor. I don’t get into politics, I don’t have time to find out about the party implications. My party is poverty”, she used to say to her visitors.

Today, 28 years after her death and with her recognition as a saint by the Catholic Church, Dulce continues to attract visitors to her sanctuary and memorial in Largo de Roma. At the Irmã Dulce Memorial (MID), in Largo de Roma, there is a permanent exhibition on the legacy of love and charity of The Good Angel of Bahia. It brings together more than 800 pieces that help to preserve and keep the ideals of the religious alive.

In 2019, MID received a total of 124,222 visitors; an increase of 120% in comparison with the flow registered in 2018 (55,757). Before the canonization announcement, the place registered an average of 250 visitors per day. In addition to foreign tourists, the survey registered in 2019 the presence of Brazilians from all states of the country, with a predominance (in this order) of visitors from Bahia, Sergipe, Ceará, Pernambuco, São Paulo and Minas Gerais.

Meet some illustrious visitors who met Dulce in Salvador:

On July 7, 1980, about 500 thousand people were at the Administrative Center of Bahia (CAB) waiting for Pope John Paul II. The pontiff made his first visit to Brazil and insisted on putting Salvador on his itinerary. At the air base, he was received by politicians, authorities and Sister Dulce – who was already in fragile health. During the celebration of the Mass for the thousands of faithful, John Paul II was surprised by the crowd’s choir screaming fervently for the Bahian nun when she approached the altar where she received a special blessing.

At the time, John Paul II, who today has the title of Saint by the Catholic Church, told Dulce to take care of her health. It was precisely the advance of Dulce’s lung disease that brought the pope to Salvador for the second time. The meeting took place on October 20, 1991.

At the age of 77, the nun had been hospitalized for nine months at Hospital Santo Antônio, one of her works, which opened in 1983. The Pope arrived at Largo de Roma accompanied by an entourage. He entered Dulce’s room, said a prayer and stood for a few minutes holding her hand. The stop in Salvador hadn’t been included in the official schedule of the pontiff, who changed the schedule just to visit Dulce. She almost couldn’t speak anymore. John Paul II gave her a rosary. 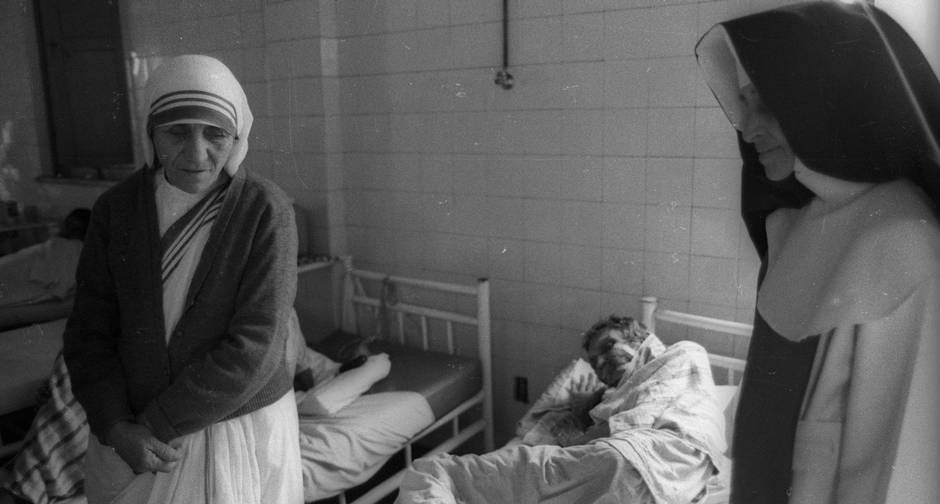 In 1979, Sister Dulce had her Social Works on the rise. However, the growth worried her. She feared that she would not be able to manage the growing demand for the hospital that emerged after the invasion of the chicken coop in her convent. That year, Mother Teresa of Calcutta, today Santa Teresa of Calcutta, visited Salvador. The Catholic nun, an ethnic Albanian, naturalized Indian, met the beds of the Abrigo Santo Antônio and also went with Dulce to the neighborhood of Alagados, where the Bahian nun did part of her social work.
The situation of Dulce’s works has always been complex from an economic point of view. At the time, Dulce even offered her management to Mother Teresa of Calcutta. However, the Catholic missionary, who developed a series of projects to assist charity around the world, including in Bahia, refused, as she said: “this is not my type of work”.

According to reports in the Irmã Dulce Memorial, the nun from Bahia said she understood that people were not interested in taking over the works, due to the constant financial difficulties, but she reinforced that “God solves these problems”.

Rio de Janeiro priest Antônio Maria, 74, considers himself an absolute “dulciano”. Several times, the priest was in Salvador to talk to the nun. At meetings – always musical – he used to sing for Dulce. In 2019, at the Vatican, he sang in honor of the nun at her canonization ceremony. “I had the happiness of meeting Sister Dulce up close, many times we were together, it was always edifying for me. Once, I made a song for her, I sang, she listened with great humility and, in the end, she said: ‘Father, you didn’t sing for Sister Dulce, no… you sang for Our Lady, because whenever one honors me, I transfer it to her'”, recalled the priest.

Antônio Maria liked to sing songs about Our Lady and Jesus Christ to Sister Dulce. It was also up to him to make the mortuary mask with plaster, registering the features of the Bahian nun, which serves as a basis for sculptures until today. 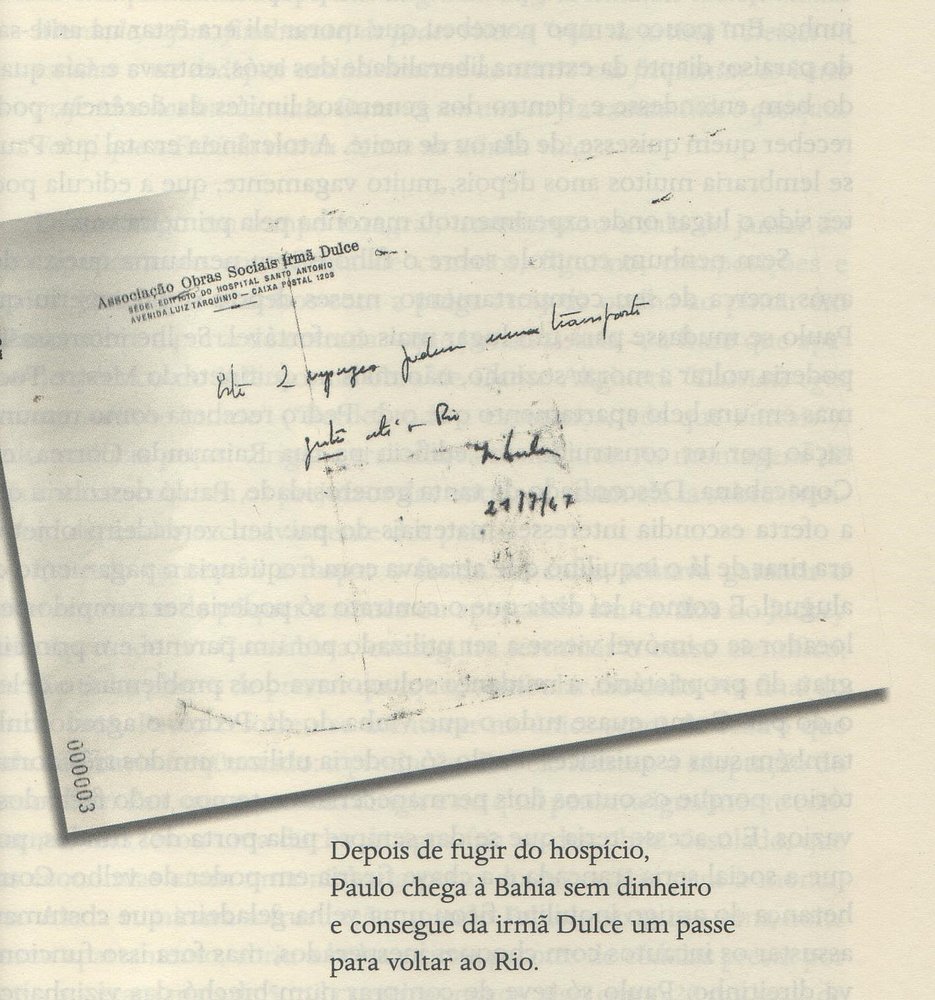 When he did not even dream of being the famous writer of world renown, Paulo Coelho, 72, from Rio de Janeiro, ventured around the world and ended up in Salvador. He had the help of Dulce to return to Rio de Janeiro after a season in the capital of Bahia. The aid was registered for the first time in the book “O Mago”, a biography of Paulo Coelho written by journalist Fernando Morais. The book tells that, in 1967, Paulo Coelho’s parents put the son in a psychiatric hospital. He was 19 years old. “I was a rebel who did not obey anyone”, recalls the writer in the book.

After two months in the hospital, Coelho ran away and, hitchhiking, ended up in Salvador. He lived in the capital of Bahia with no money, no food and sleeping on the streets. It was there that he met Sister Dulce, who “helped him to get up”, as he reports in the book.

As Paulo said in “O Mago”, after receiving a bowl of soup at Irmã Dulce Social Works (Osid), he went to Dulce and asked her for money to buy two bus tickets to Rio de Janeiro. The Bahian nun wrote a note with the request, which he exchanged at the bus station window – which at the time worked in the Dois Leões neighborhood – for the two tickets, and finally headed home. The note said, with the Social Works stamp and signed by Dulce, on July 21, 1967: “These 2 boys ask for a free transport to Rio”.

This was the only time that Coelho and Dulce met. However, he remains grateful for the nun’s gesture and, to this day, continues to help her social works. 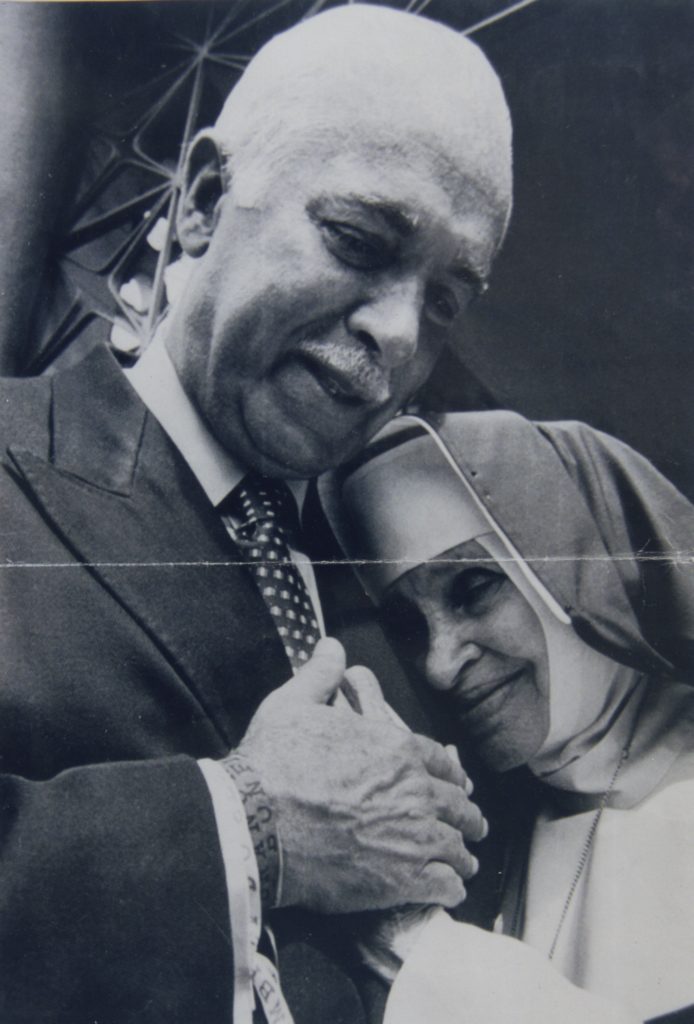 Governor of Bahia in three terms, Antonio Carlos Magalhães (ACM) was one of the political figures to whom Dulce always appealed. In the period when ACM was Minister of Communications, Dulce starred in the Telebahia advertising campaign, a company of the Telebrás group, in Bahia, before the privatization in 1998.

Her photo was spread in all the old telephone booths in the state with a message asking for donations. At the time, Dulce obtained a lot of financial aid and became better known in the interior of the state. After the telephone campaign, and with ACM’s support, she carried out several media actions that benefited her works. Dulce often met with ACM to ask for help, going to his office with the famous black folder to ask for donations. The nun called him “godfather”. ACM donated to her part of the land where the Social Works (Osid) are installed.

On the day of Dulce’s death, ACM was governor and stressed that it would be the government’s mission to maintain the nun’s legacy. “We have to fight to maintain the spirit of Sister Dulce’s work. We lost our great saint and I lost a great friend, who always accompanied me in my public life and knew me very well. With Sister Dulce absent, it is the government’s obligation to redouble efforts. She was the one who achieved all this for Bahia, in this remarkable work throughout Brazil”, he declared in an article published in the newspaper Correio da Bahia, in the March 13, 1992 edition. 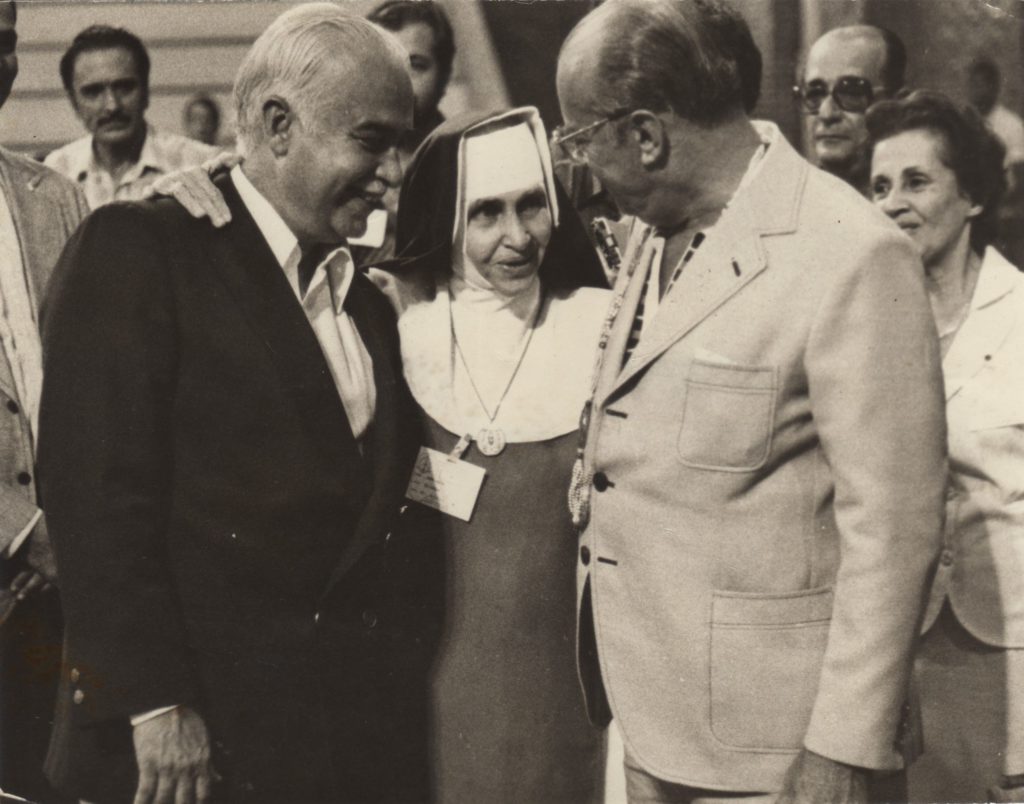 The first president of the republic who visited Irmã Dulce was General João Baptista Figueiredo, through ACM. Figueiredo, from Rio de Janeiro, was the first head of state to enter the Irmã Dulce Social Works. On the visit, she took him on purpose to see the morgue – where some patients shared space with the dead. It worked. On the way out, he said: “Sister Dulce, if I need to rob a bank to help, I will rob”, to which she replied: “I will help you rob this bank”. After that, the president granted several benefits to Osid through donations.

Sister Dulce had good strategies to help the neediest. In 1947, then President Eurico Gaspar Dutra, born in the state of Mato Grosso, was visiting Largo do Bonfim, in Salvador, when he came across Irmã Dulce accompanied by about 300 boys from Círculo Operário da Bahia (COB) – an entity founded by Dulce and workers for the poor people of the Lower City.

She placed herself in front of the president’s entourage. Gaspar Dutra ordered the car to stop to listen to the nun, who asked for more resources for the COB. He authorized federal aid for the Círculo Operário inauguration, and even participated in the inaugural ceremony.

The work of Irmã Dulce built in Salvador was taken to the world with more emphasis, for the first time, in 1988, when then president José Sarney, together with Queen Silvia of Sweden, suggested the name of the Bahian nun to win the Nobel Peace Prize. Dulce did not win the prize, but gained visibility, which became several donations.

That wasn’t Sarney’s only help to Dulce. As president, Sarney kept a secret phone number that only Sister Dulce had. It was known as “the red phone” that Dulce always used to call during the times of greatest need. For many times, the president, born in Maranhão, visited Bahia to speak with the nun.

In the 1990s, when then-president Fernando Collor de Mello introduced an economic plan and accounts were blocked, Dulce made an intervention. At the time, the nun talked by phone with the then Minister of Economy, Zélia Cardoso de Mello, and managed to have her account released.

Years before that, Collor de Mello, born in Rio de Janeiro, had already come to visit Irmã Dulce. He came to Salvador to talk to the nun.

Jorge Gauthier is a journalist and author of the book “Irmã Dulce: Os Milagres pela Fé”; research on the Bahian nun’s life since 2011.

24 places in Salvador with sidewalk seating