From November to April, the city receives cruise passengers from all over the world.

Seventy-two years ago, on August 5, 1946, Pierre Verger (1902-1996) arrived in Bahia, coming by ship from Rio de Janeiro. Verger, who was a French photographer, ethnologist and anthropologist, had traveled the five continents and was passionate about African and African-American culture. He arrived in the Northeast part of Brazil with no intention to stay, just like everywhere he went in the world. Things started to change the day Verger landed here. While Europe was in the post-war era, everything was very peaceful in Salvador. He was soon seduced by the city’s hospitality and cultural richness and, in the end, decided to stay. His friend anthropologist Roger Bastide guided him on exploring Bahia, and Verger had read Jorge Amado’s book “Jubiabá”, which increased his curiosity.

“But I will declare that one of the reasons for my arrival here is in large part the fact that I read Jorge Amado’s Jubiabá before the war. I was delighted with the book. I confess that the reaction I had when I arrived was even stronger.” Excerpt taken from Exu Magazine, Pierre Verger interview for Claudius Portugal.

Nowadays, how many stories of those who fall in love with the city have you heard about? Of people who, like Verger, came here by ship and liked it so much that decided to stay, or came back several times. Almost completely surrounded by the sea, Salvador is a peninsula. From Barra up, Atlantic Ocean. From Barra down, the lush All Saints Bay. This geographic condition allows us to be on the route of national and international cruises.

The Port of Salvador has historically the third largest number of sea cruise ships stopovers from the ports of Brazil. This position confirms its tourist, multicultural attractiveness, as well as its architectural exuberance, and natural beauties diversity. The season of ships goes from November to April, and according to Gustavo de Andrade Santos, Unit Manager of CONTERMAS, by 2019 there are 50 stopovers planned and it is estimated that 160,000 cruise passengers will visit the city in this period.

The Cruise Terminal is in a privileged location: it gives access to the famous Historical Center of Salvador in less than 10 minutes. For those who want to go straight to Bonfim Church, the route doesn’t take more than 30 minutes, and for Barra it is a little over 6 kilometers away. Samy Furtado, Tour Escort at the MSC Cruzeiros company, says that clients set up their tour groups inside the ships, through tour magazines, those with the descriptions of each excursion, or through the MSC company website.

“About 1,000 passengers know Salvador in this way, looking for the ship’s internal agencies,” says Samy.

At the Terminal, the Kiosk GROU Tourism is the official agency on land and makes sales only on the premises, you can’t buy on internet. Marilda Duarte, a kiosk attendant, explains that the itineraries are pre-designed, and as the groups are set, the agency takes care of everything: “The service has a car waiting with a guide to go with the group, and everyone already leaves with identification (a bracelet), leaving the name and number of the cabin”. In both examples, both the ship’s agency and GROU, the most popular excursions are Farol da Barra, Bonfim Church, Historical Center and Stella Maris beaches.

Besides that, there are external guides that the visitors can choose on their own. These professionals stay at the Terminal exit. But if you are one of those who doesn’t fit into any of these examples, either because you have come to town a few times or because you don’t really enjoy this group tour, we have some tips for you to get to know the city with a “fresh look”. The itineraries are: “One afternoon in Itapuã”, “A sunny day with the family”, “An afternoon in the Lower City”, “Much charm at Carmo”, and “Pierre Verger around the city”. If you are too lazy to do a lot of things, take the Plano Inclinado Gonçalves or the Lacerda Elevator (you can walk to both from the Maritime Terminal) and go to the Carnival House. It’s unmissable!

There are several types of ships as well as there are several types of passengers. The Hotel Ships, for example, are much smaller vessels, where the public is composed almost entirely by foreigners with high purchasing power. In this case, the passenger owns the cabin, he/she doesn’t buy a cruise package. It works like this: the ship navigates around the world and you can at any time choose a port and embark. In big ships, like Fantasia and Poesia for example, the public is predominantly Brazilian, being almost 90% of the passengers. There’s also the School Ship, only of university students, and all the passengers are foreigners.

In December (02), Salvador received the largest cruise ship in Brazil’s history. Recently inaugurated in Italy, MSC Seaview has a capacity of 5,179 passengers, 11 types of cabins, six specialized restaurants, seven different shows and a more than 100 meters zipline. The transatlantic was inspired by the concept of a ‘beach house’, and its structure impresses with its innovative 323-meter-long architecture. The MSC Seaview will dock in the capital of Bahia for ten times this season, the last being on April 2. 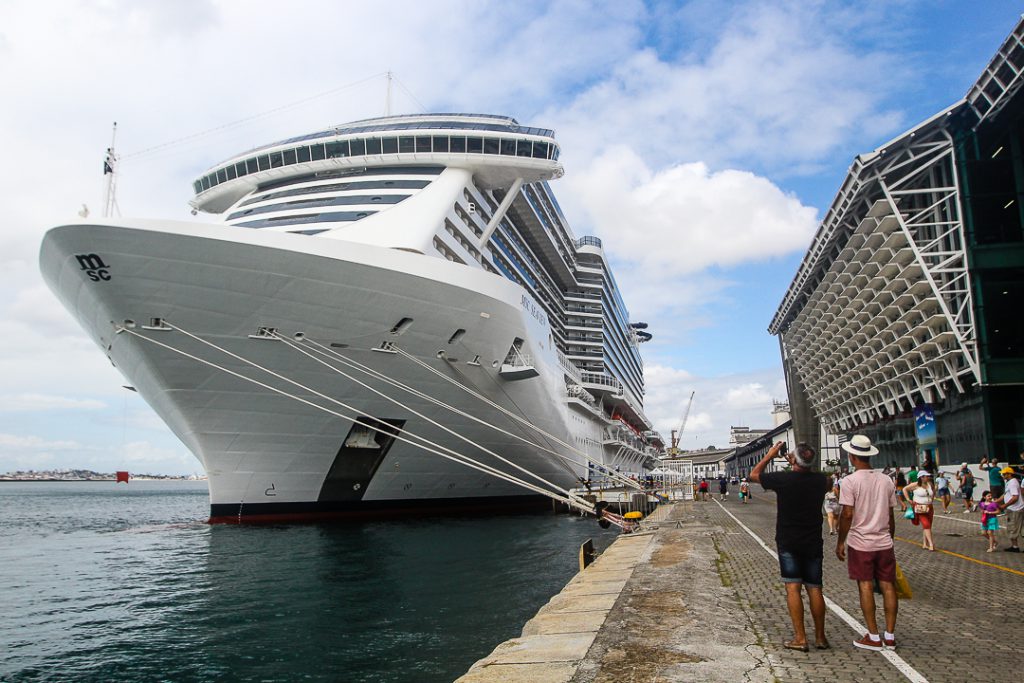 Another important moment about the passengers flow in the city is Salvador Carnival – which we write here in capital letters to show the importance of this time of year for the city. Everything changes when these ships arrive. Luiz Augusto Brito, Operations and Port Security Supervisor of the Passenger Terminal, says that in the past it was very common to have party ships, like graduation celebrations, etc. This characteristic has been changing, but the carnival ships, these ones remain alive and kicking. “Even the public changes. At Carnival people come to enjoy, but to really enjoy,” Luiz emphasizes.

The ships in the rest of the season remain moored an average of 10 to 12 hours. Carnival ships, on the other hand, have a longer stay, usually arrive on Saturday and only leave on Tuesday or even Ash Wednesday. And if you think people sleep in hotels around town, you’re wrong. All crew members return every day/night to the ship. Detail: it is written “day/night” because the passengers often return only the next day in the morning. “(At this time) you see people going out dressed as Batman and coming back as Robin, going from Spider-Man to Wonder Woman. A citizen already threw himself on the x-ray machine,” jokes Luiz. 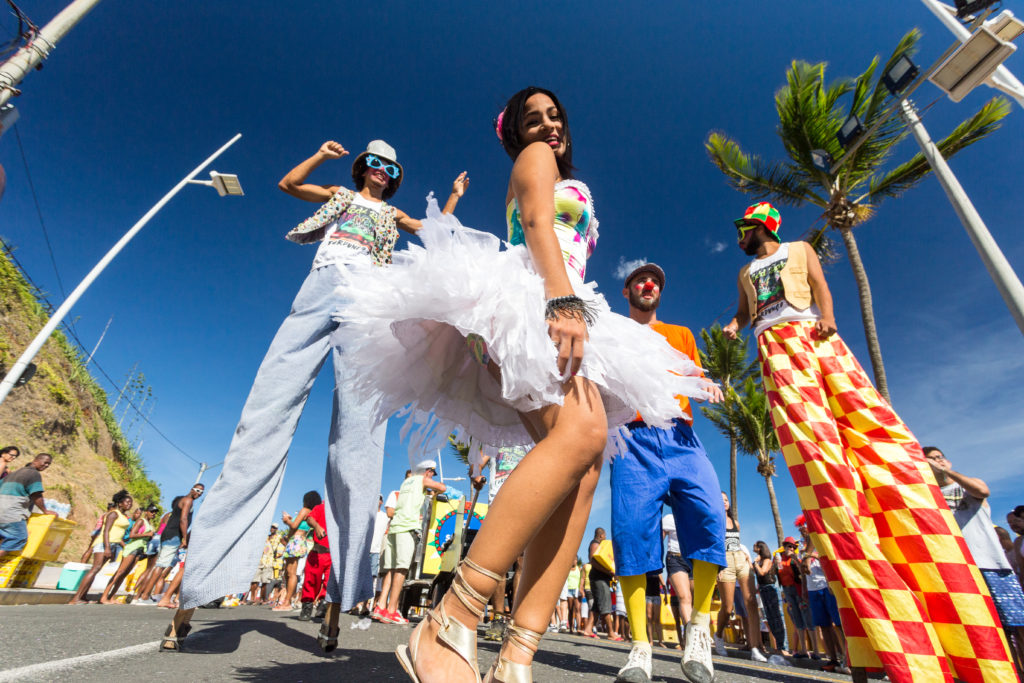 He says that during carnival, security is reinforced, the Federal Police stays on standby and everyone is instructed to maintain the organization. But keeping a smile on the face and the tranquility to deal with the revelers are necessary things to carry on with the work, even with people’s excitement. Some structures are installed on the top floor of the Terminal, such as abadás delivery, customization and everything that can help people during their stay. Few visitors buy sightseeing tours, so the focus goes to make sure that people disembark and leave with everything they need to enjoy in safety.

At carnival, the big majority of the people who are in these ships are Brazilians and a young public. Daniele Lima Leão Vieira, the receptive interpreter, says that one year two of the moored ships also placed Djs playing inside, with parties in each of them, so it was carnival also on the high seas. “As the days passed by, the ships honked at each other. Now can you imagine the party that happened in this terminal?”, Daniele recalls. 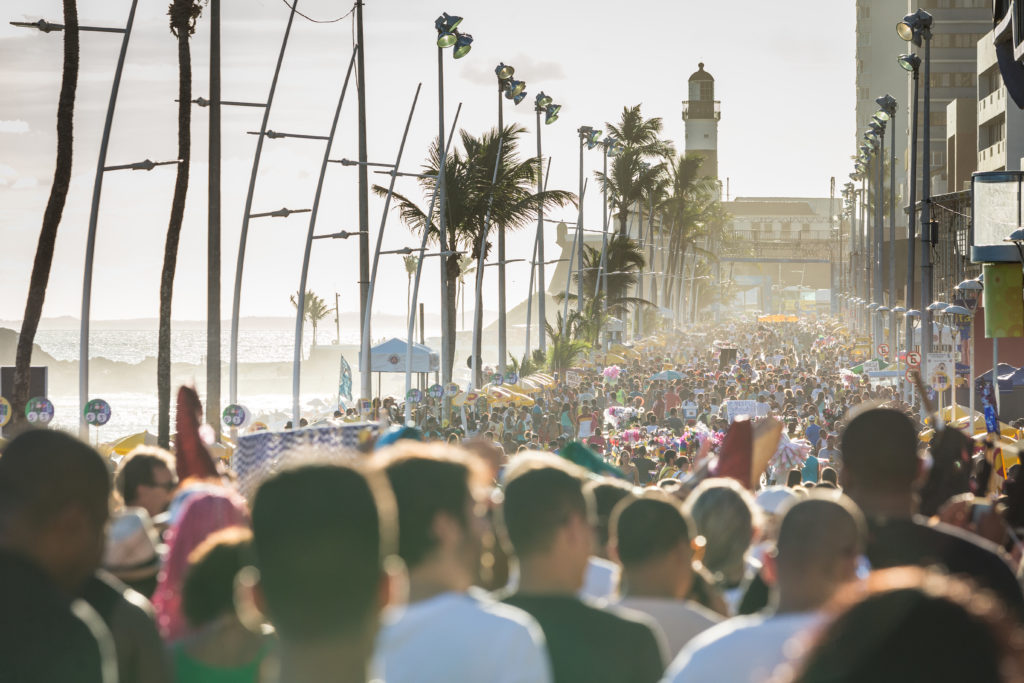 Salvador is a magical city indeed and there are things that only happen in Bahia. Whatever your nationality is, or what place of Brazil you’re coming from; if you are young or if you already have white hair; whether you’ve come for the culture, music, beaches or parties; if you are a walking all day type or if you’re more contemplative, you’ll definitely find ‘THE’ town for you. It may be the drums sound that emanates from every corner, or the people who live in the city, but the truth is that Salvador is a curious and intense experience. Mix it up!

The Arrival Terminal is not open to the public. People authorized to enter are: passengers who are embarking or disembarking, people who are working on the ship and at the kiosks, or the terminal’s own staff, in addition to the inspection agencies.

When it’s boarding time, there is a division on the ship’s floors, with the check-in boarding upstairs and disembark downstairs. The passenger goes upstairs, checks in, checks the suitcase and embarks. So if you are going to meet someone who lives in Salvador, you will have to leave the terminal and meet the person outside.

Receptive Kiosk to tourists with interpreters – There, the passengers will find maps and magazines about the city, tourist spots, gastronomy and also useful phone numbers. They can help you to ask for a taxi or to contact the Federal Police. Inside there are kiosks selling items such as jewelry, clothing and souvenirs.

Hours of operation vary according to the ships arrivals. The Terminal only works while the ships are moored.