5 Bahian brands that you must know

Salvador has a profusion of huge fashion designers. Past events like Barra Fashion Bahia have already revealed many names and now the successful Afro Fashion Day Show where the scene boils and continues to give good results. Big names like Goya Lopes, Ismael Soudam and Aládio Marques are examples of the diversity of styles and inspirations that Bahia can provide.

It was an arduous mission choosing only five Bahian brands for this article. To make it “less difficult”, we’ve given here the clippings of five names that just by looking at, you can tell whose creation it is. They carry the Bahian DNA in different perspectives, showing the amplitude of local production, as well as being recognized beyond Salvador. Five different views of the city, but with equal amount of love, are able to translate what it is to be soteropolitan into products.

Fashion designer, researcher from Bahia and fashion activist, Carol Barreto was the first Brazilian to parade at Black Fashion Week in Paris. In her creations, she seeks to produce creative and productive processes, respectable and horizontal to build fashion products and images from reflections of ethnoracial relationships and gender, supporting ethnic and slow fashion proposals.

In October 2018, Carol Barreto, composer Laila Rosa and journalist Mira Silva, were invited to an academic and artistic residency that included a series of lectures, workshops and art presentations at William and Mary University, a university located in the city of Williamsburg , in the state of Virginia (USA).

There, they also presented a wide project, ‘Asè Collection’, inspired by the Afro Brazilian marks under the impact of a black woman returning to Angola from Bahia, land from which our ancestors left, revering the history of blackness in Brazil. The Asè collection has already circulated internationally to Luanda – AG, New York – USA, Mexico City – MEX, Salvador – BA and is now going to Williamsburg in the state of Virginia (USA) and then returning to Brazil to circulate to other important art galleries, curated by Juci Reis – Float Program / Harmonipan Studio. 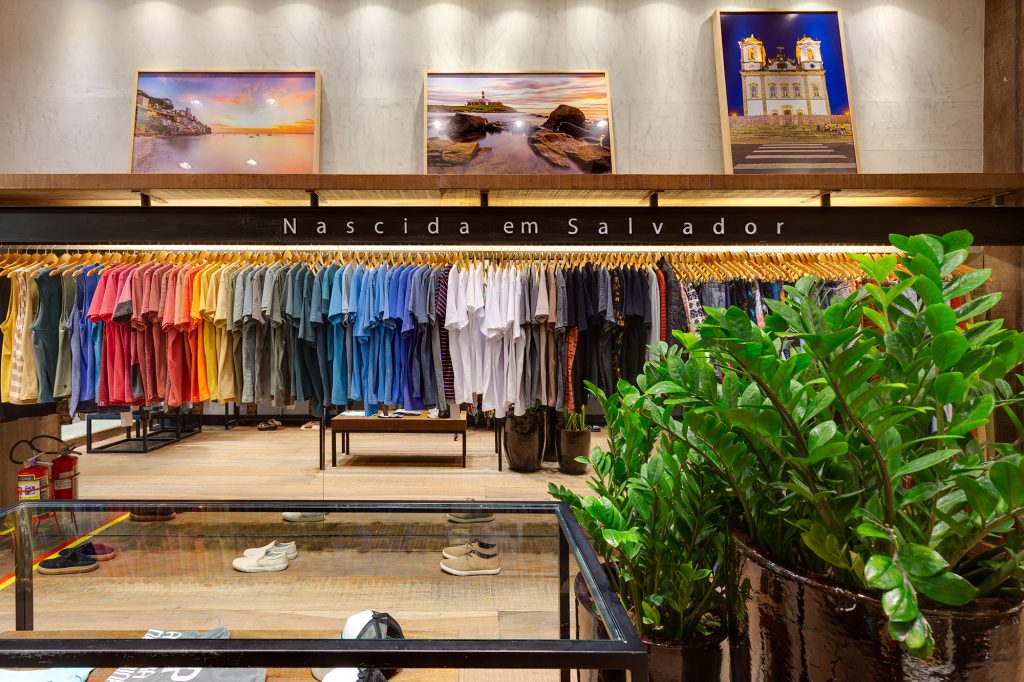 This is that brand that became so cherished, not only to Bahians, but to any fan of this city, for having products totally representative of Salvador. A regional brand with a national vocation, already with a store beyond Bahia and advancing into franchising. It takes advantage of local slang like, Oxe and Oxente on their T-shirts, prints that refer to tourist attractions, besides doing everything with smoothness and great quality. Its stores are well decorated and anyone who has seen it grow is very proud of the brands history.

Soul Dila was born in 2008, taking along the dream of three young people who wanted not only to undertake it but to make a stand that, besides stylish and cool clothes, it could add value, bring positivity to people and show Bahia around the world. They inaugurated the first store in 2011, with an initial production of seventy t-shirts. Today, there are stores in all main shopping malls in the city, as well as one outside the city, in Aracajú. If you do not know it, go to the Apipema store located on a wooded street and in a dreamy house, a real charm.

The Candida Specht Atelier is a brand that mixes the references of fashion and the richness of prints and textures of fabrics with originality and good taste. All handmade and with special care that make into objects of desire. There are bags, backpacks, thermals, tiaras, turbans, wallets, nécessaires, cases, tote bags, luggage, mat bags. All very beautiful and delicate.

The brand was born in 2002 and holds the creators name. Her items have a cool style, tuned into the trends, and at the same time, free to mix handmade with classic. The brand has its own ateliê and it’s so charming, there’s also some partner brands like IARA, Things of Ninha @coisasdeninha and Mercedes West @ mercedeswest.

It has already opened the doors to receive partners like Dresscoração, Jezebel, Isaac Silva, Casa Jupiter, Araruna, Carola Hoisel and Carpina. Not to mention the “illustrious visits from Luiza Brasil from Mequetrefismos, Magá Moura, Camila Pitanga, Leandra Leal, Carla Lemos do Modices, Nara Gil. The atelier works from Monday to Friday from 13 a.m. to 6 p.m. – other times can be checked by calling 71.99943.3686.

Founded in 2003 by designer Alex Bispo, Crioula is a brand that establishes a bond with its clients through regionalization, working on its creations with elements of the Brazilian and Northeastern diversity through its culture, language, vocabulary and history. The brand has pieces of clothing that bring an immediate identification to its target audience, made up of young men and women.

Another important fact is that Crioula emerged in the Liberdade neighborhood, where Alex Bispo lived for many years and which made it possible to add a differentiated social perspective to the brands image, valuing aspects and particularities of black culture, so deeply rooted in the history of Bahian people.

Amongst the mix of products created, the shirts stand out. The prints are created by several illustrators who reproduce, according to their artistic trait, the concepts of the brand. Tote bags, dresses, posters and cushions are also made.

In the prints, there are creations that became classic like the poás made of little widows (a black insect of white spots, typical of the region) and also shirts with silk images of the Saints Cosmas and Damião in reference to the special Caruru events that happen every September.

The party clothing brand REALCE was born in Salvador in December 2017 with the intention of making the lives of its customers shine. They have a bold and fun footprint and all the creations are in sequins, since the brand was initially thought to be only for carnival, but when ordering, the creations became broader. The clothes are versatile, composing looks for more formal parties and even for clubbing, music festivals, balls, carnival blocks and VIP bars. Another interesting point of the brand is that various items can be worn by both men and women.

Within just a year on the road, the brand has already made it to the Ela pullout section of Globo’s incredible carnival editorial, where the presenter Sabrina Sato wears the brand, practically from head to toe. It also became a favorite of Preta Gil, who wore the brands’ clothes for two shows during the 2018 carnival in Rio de Janeiro.

In addition, it fell in favor of journalist Paula Magalhães and fashion producer Leo Amaral, appearing in the Expresso da moda on the Mosaico program on TV Bahia (affiliated with Globo), and twice in the Correio newspaper (Bazar and Vixi). This summer it has already been worn by the singers Márcia Castro and Márcia Shorts in the show series called Xarás.

Born from references of behavior and style, this brand sprouted from its first T-shirts by printing sentences of empowerment in 2012. Today, they work with a meticulous collection of textures and national prints that reflect the undeniable African heritage in all its colors and forms. Their runs are limited, making them unique editions.

They are more than 28,000 followers on their Instagram profile, they make sales online on their website, besides being in a wonderfully charming space in Salvador, Casa Boqueirão. They also sell in out-of-town stores such as Itacaré, Recife and Caraíva. The actress, Camila Pitanga, the singer Tássia Reis, the singer Xenia France and the singer Liniker are some of those who love the brand.

Instagram: dresscoracao. Access here: www.dresscoracao.com (We did not get a response from the designer at this point in edition, but we couldn’t not mentio DressCoração, right ?!)