What to know about Lavagem do Bonfim
Igreja de Nosso Senhor do Bonfim. Foto: Fábio Marconi

The sacred and the profane, religious syncretism, sacred run, parties and boat trip. 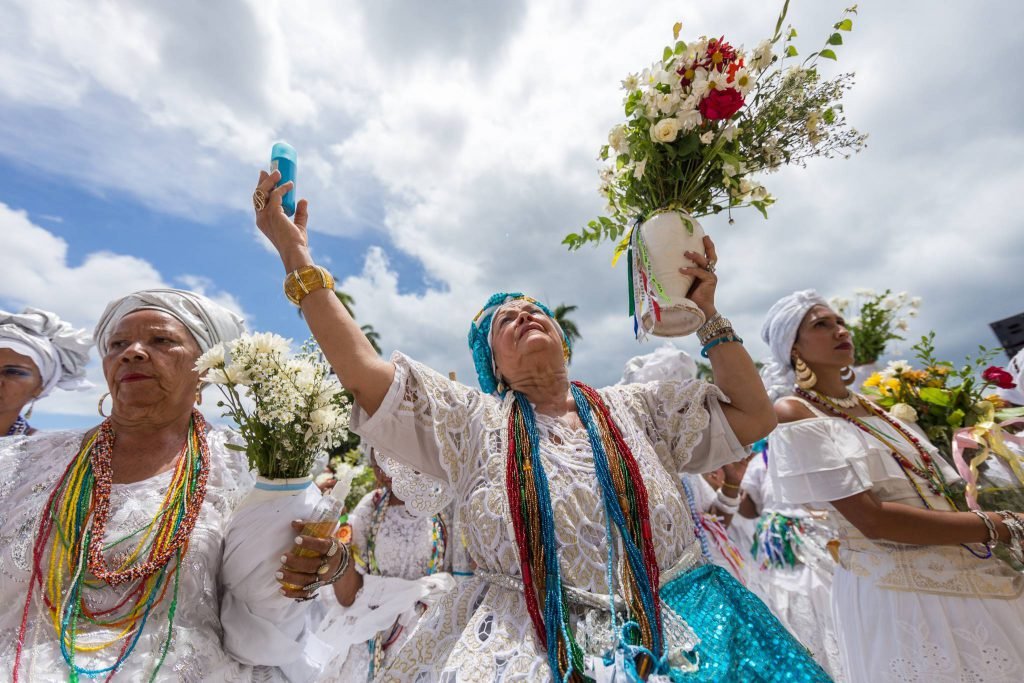 Celebrated on the second Thursday of the year, the traditional washing of Bonfim’s staircases is considered the second largest popular manifestation of Bahia, only behind Carnival. On that day, which will be on January 17, 2019, thousands of faithful members gather in the Lower City, in Salvador, to participate in masses and in one of the largest religious walks in the state, which takes place between the Church of Our Lady of Conceição da Praia, in Comércio, and the Sacred Hill, in Bonfim.

For those who have never been there, this is an “invitation itinerary”, where we put together several tips to make your Lavagem do Bonfim be one of the unforgettable experiences of your life. The popular festivals are part of Bahia’s essence, they represent surrender and dedication to a greater good, a union of sacred and profane that we can only see here. Religious syncretism, sacred run and boat trip, all in one celebration.

This year, locals and tourists will have beautiful surprises when they arrive at the Church of Our Lord of Bonfim. There was a great restoration throughout the Sacred Hill area, the interior of the church is being completely restored, besides the facade, the railings and the staircase. The hill’s patio has also been requalified, ensuring an even more beautiful party. 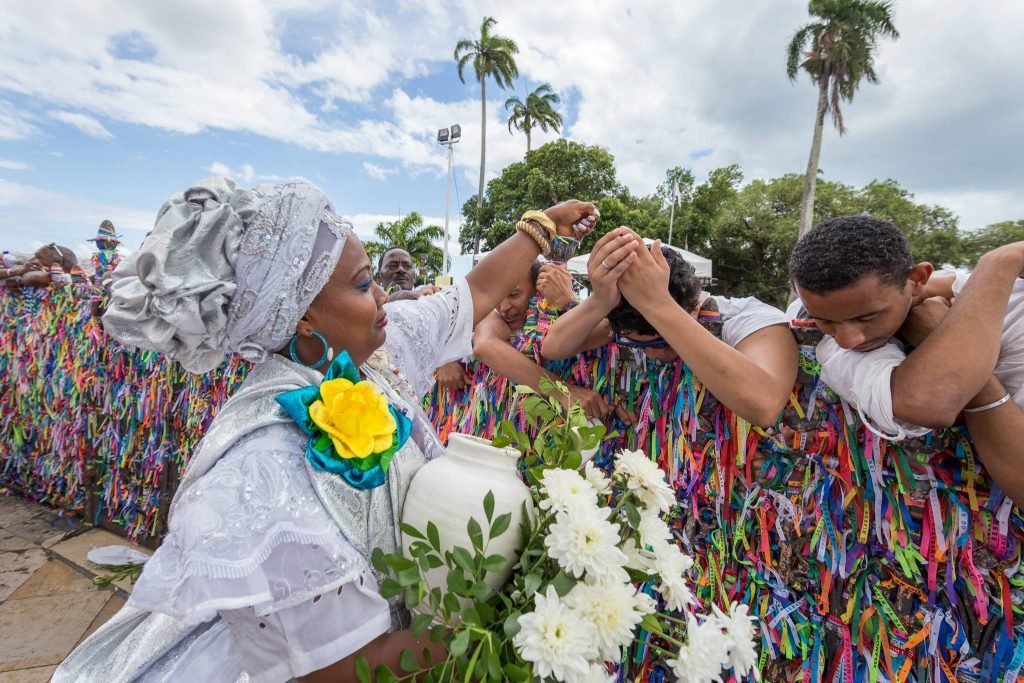 The celebration begins in front of the Church of Our Lady of Conceição da Praia, where a worship service takes place. It’s good to arrive early, the mass begins around 8am. The processions go out one by one towards the Church of Bonfim. Our Lord of Bonfim is syncretized with Oxalá. It is very beautiful to see all sorts of devotees walking together.

Afterwards, we begin a walk of approximately 8km to the Church of Our Lord of Bonfim. Several processions make the journey, including Afoxé Filhos de Gandhy. They don’t have a right time (nor is it told) to leave, so you have two options: one is to stay tuned and walk with them from Conceição da Praia, the other is to meet them on the way.

The Baianas’ procession leaves at around 9:30am, shortly after the worship service, many of them go before. Arriving at the Sacred Hill, they wash the staircase. And there, another mass is celebrated late in the morning. The feast, which has been happening for more than two centuries, mobilizes thousands of faithful members, sympathizers and tourists.

The Sacred Running has been held for over 30 years, organized by Bahia Athletics Federation (FBA) and opens the street race calendar for Salvador city. Participants invade the streets of the Lower City at high speed. The Start is in front of the Church of Our Lady of Conceição da Praia, at 7am, before the Baianas’ groups leave in procession. You have to sign up in advance, but many runners go on their own. Gyms throughout the city also form their private groups. The Sacred Running, or Bonfim Running, as it is commonly called, is one of the most popular, lively and traditional street races in Salvador. The race marks the beginning of the festivities, as it has also become a tradition of Salvador.

(Popular sentence said at Lavagem do Bonfim festival which means “Whoever has faith will go on foot”.) 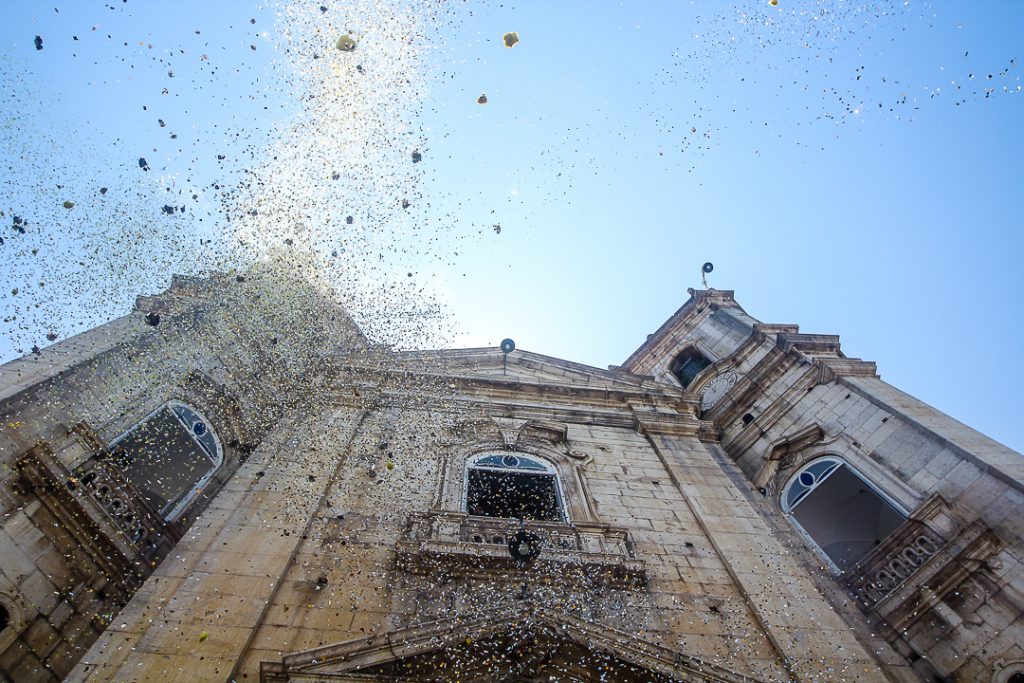 The walk is a true sightseeing tour, beginning with the very Church of Our Lady of Conceição da Praia, built in the 17th century in Gothic style, by determination of Tomé de Souza. Then you’ll pass by two postcards: to the right side, Elevador Lacerda (the elevator connects the Lower City to the Upper City) named in honor of the engineer who built it, Augusto Frederico de Lacerda, in the 19th century. On the left side is the famous Model Market (Mercado Modelo) with its almost 300 stores that sell handicrafts and local souvenirs. Then the walk continues along Av. Miguel Calmon.

Soon after, on Av. Jequitaia, there is the Gold Market (Mercado do Ouro), built at the end of the 19th century, where you’ll find one of the best restaurants to eat steaks in Salvador: Filé do Juarez. Still on this avenue, there is Museu du Ritmo, Trapiche Barnabé, besides the inclined plane that connects the Lower City to Santo Antônio Além do Carmo. At Calçada neighborhood, São Joaquim Fair (one of the most iconic popular fairs in the city) is on the left side and on the right side is the Church of the Orphans of São Joaquim.

Further on, in Largo da Calçada, there is the train station that connects the Lower City to the Suburban Railroad of Salvador and, a few meters later, in Largo de Roma, there are the Social Works of Sister Dulce (Obras Sociais de Irmã Dulce). Now you’re close, there’s only one straight line till the Sacred Hill. 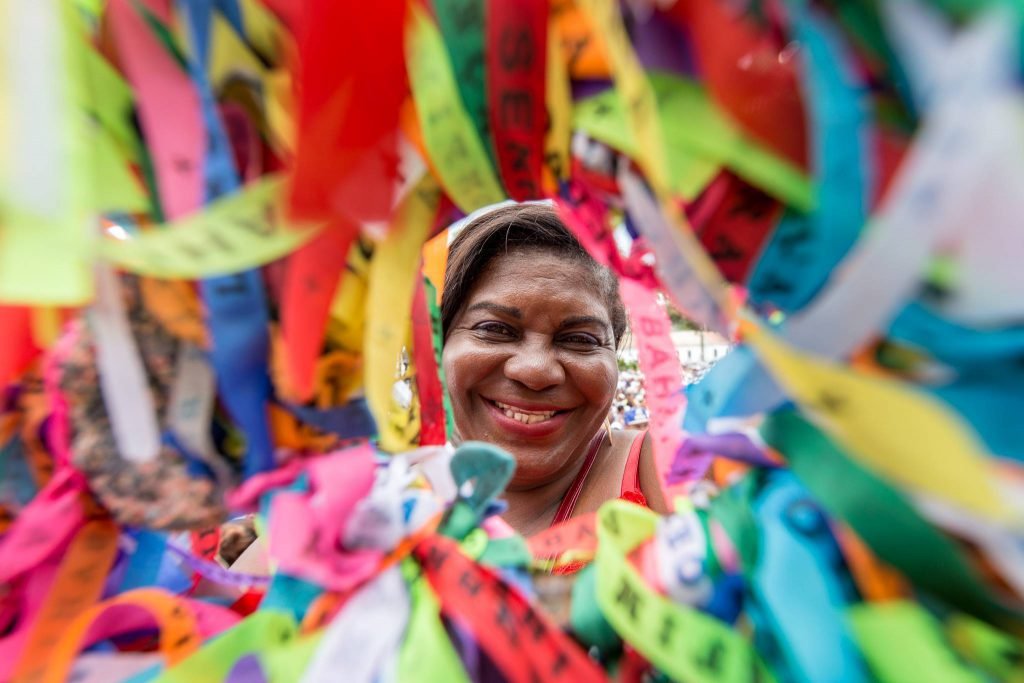 Throughout the course you go through food and drink stalls, feijoada in people’s houses and in the commerce, music for all kinds of taste, people going back and forth. Several folkloric groups make the journey, besides the traditional coffee carts that put up speakers, competing to see who is more creative and adorned.

It is very common to have closed parties such as the Lavagem promoted by Carlinhos Brown, “Enxaguada do Bonfim”, which receives artists at Museu du Ritmo for good performances. Music is actually everywhere, as many procession groups go out with their own micro trios (little music trucks), as well as samba bands that play on the street. Many of these people go to fulfill a religious vow but to make everything lighter and more relaxed, they celebrate to show gratitude. 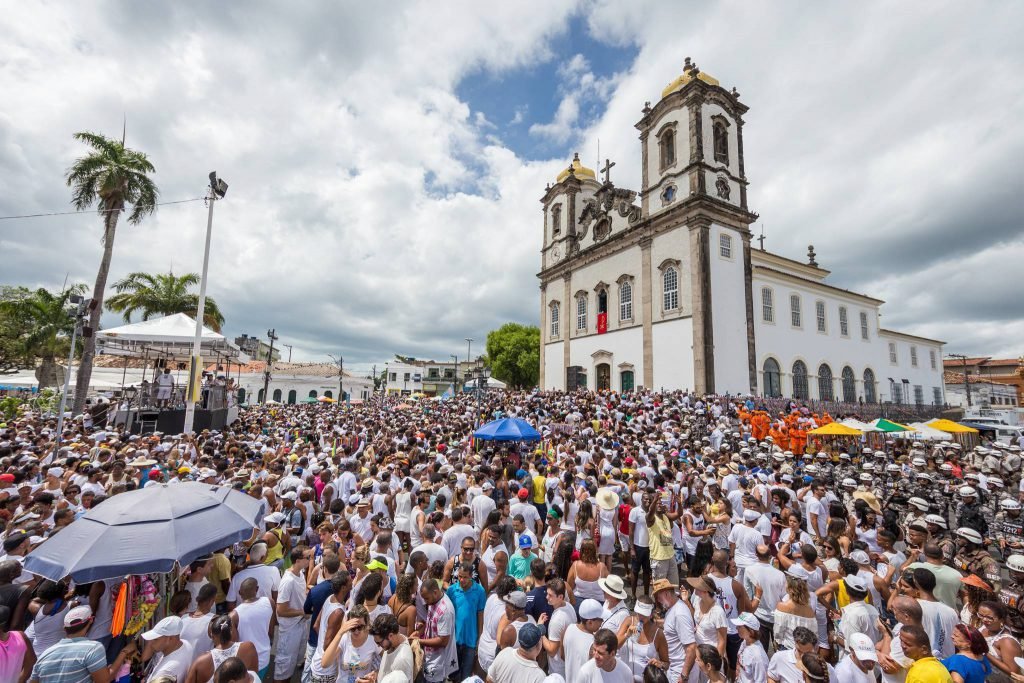 Getting to the Sacred Hill is an emotion that is hard to describe, it’s just possible to feel! Already on the way up, saint people bathe the crowd in herbs and everything smells of rue herb and lavender. Seeing so many people in one purpose touches your soul, leaving you with joy and hope that fill your eyes with tears. It is also common to see people on their knees, paying their penances in gratitude. It is a different energy, strong and intense.

It is at this party that we understand why the church’s railings are so full of colorful ribbons tied on them. A lot of people take turns tying their Bonfim ribbons and making their wishes. Don’t miss tying yours. Go slowly by the railings, try to kneel side by side with so many faithful people. As you tie your ribbon, look through the railings and you will see that many Baianas are washing the front part of the church. Later, after the mass facing the crowded patio, the baianas begin to wash the church and staircases with their brooms, flowers and water pots on their heads.

The square in front of the Church of Bonfim is full of people, drinks and good food stalls. At the end of the day, it is usual for groups of friends to go back by having parties inside boats, schooners and motorboats through All Saints Bay, from the Lower City until Comércio. But you need to organize it in advance, so get your friends together and schedule your return before you even go. If this is not your case, the tip is to walk back to Largo da Calçada and get an authorized motorcycle taxi from there to take you back to Elevador Lacerda, at least. Otherwise, you will have to walk all the way back. 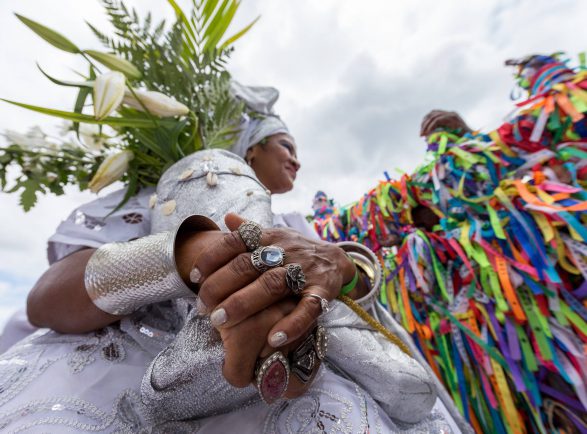 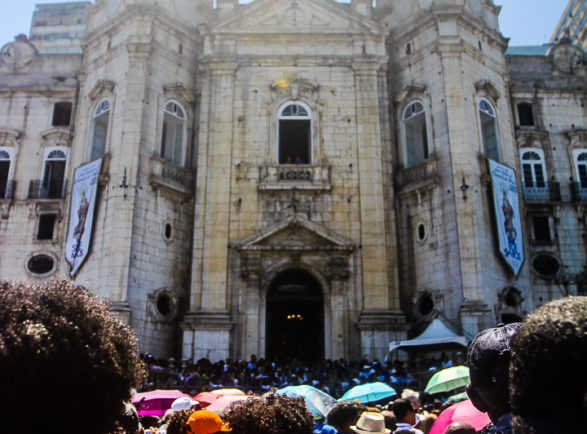 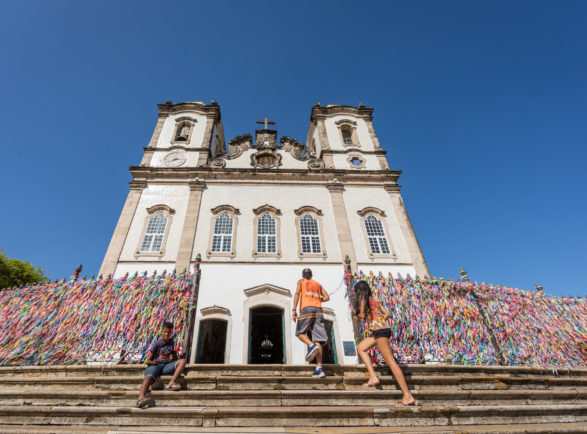 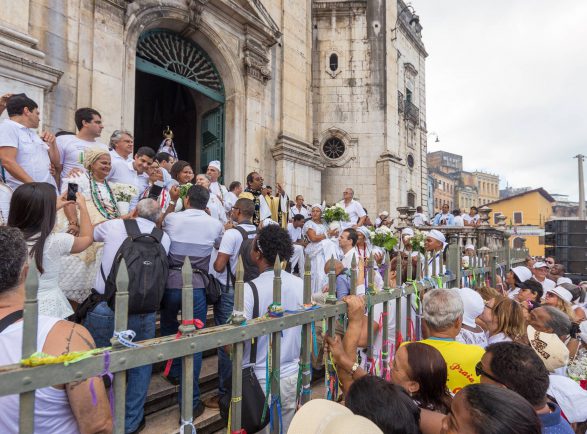 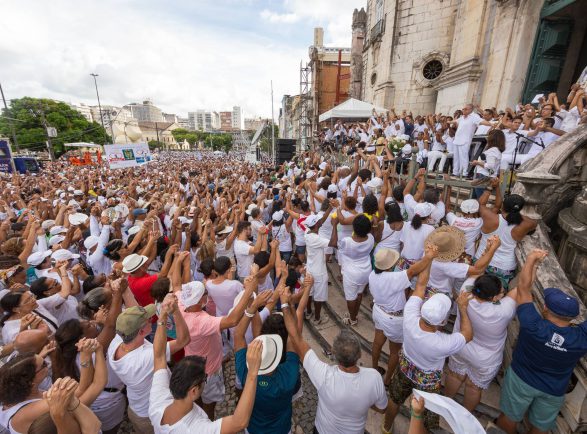 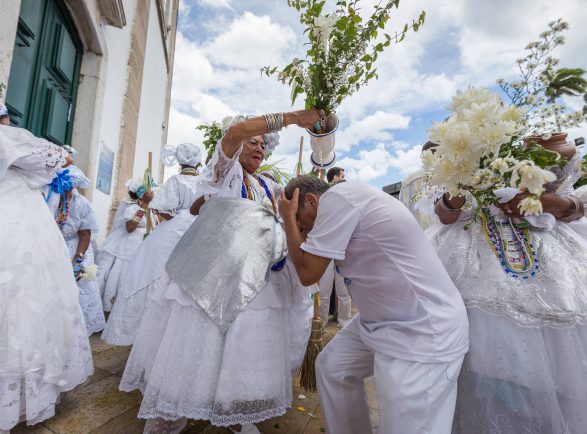 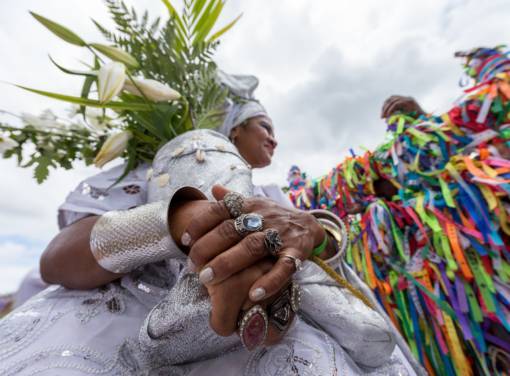 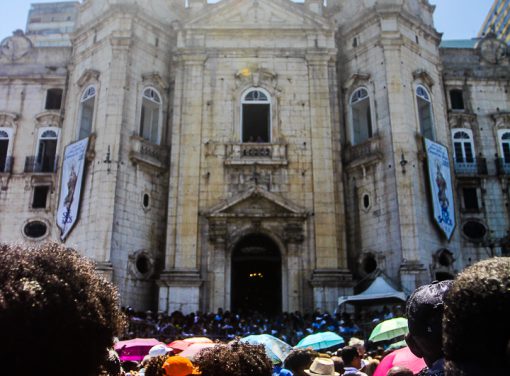 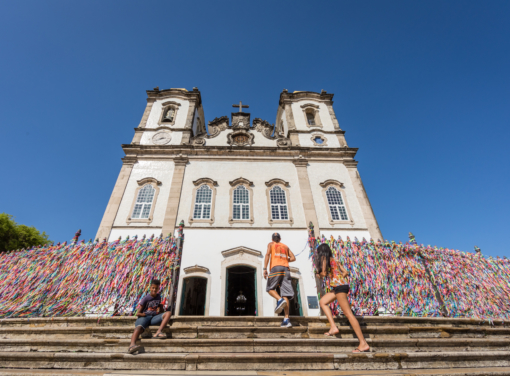 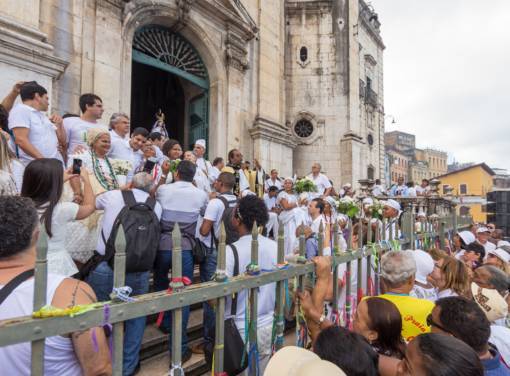 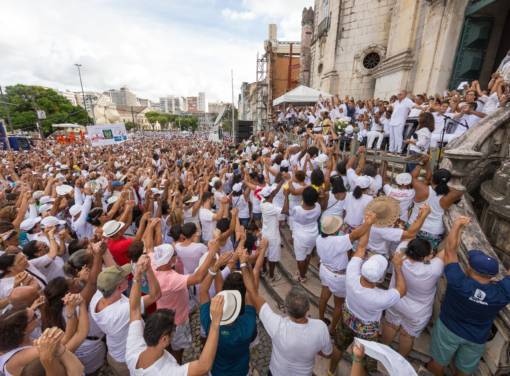 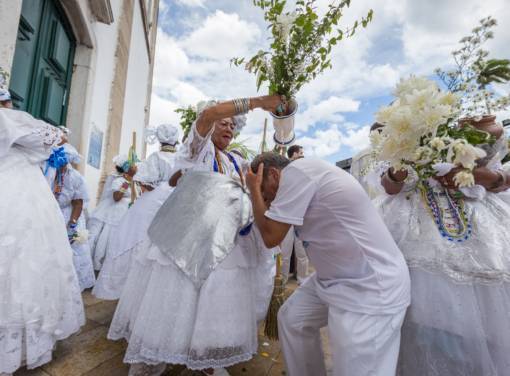 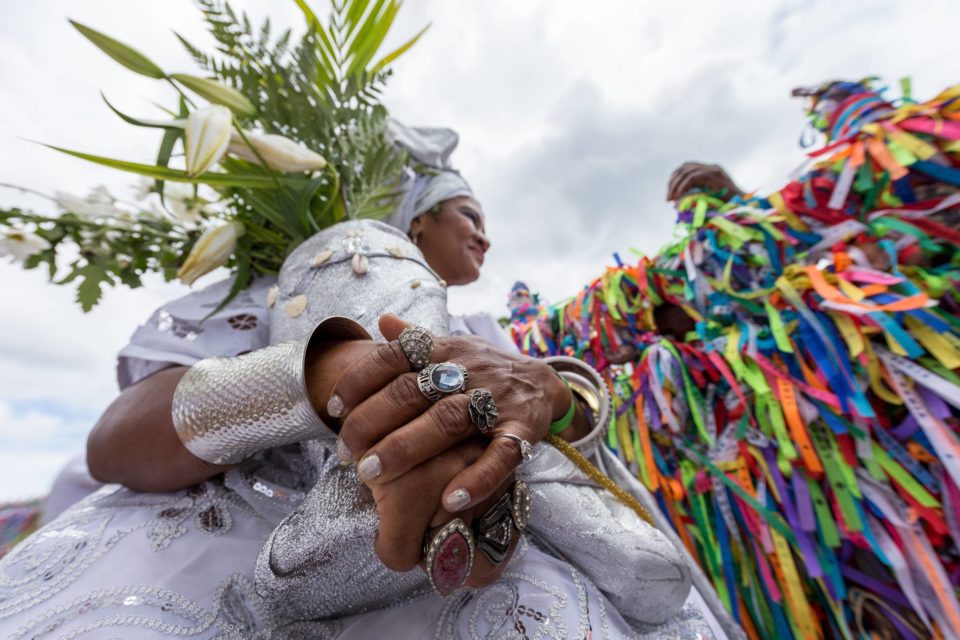 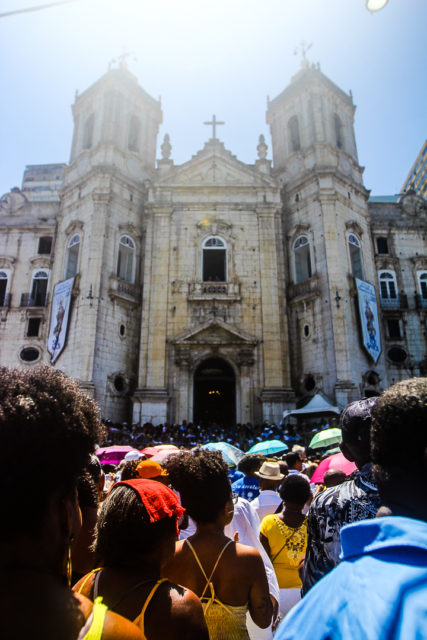 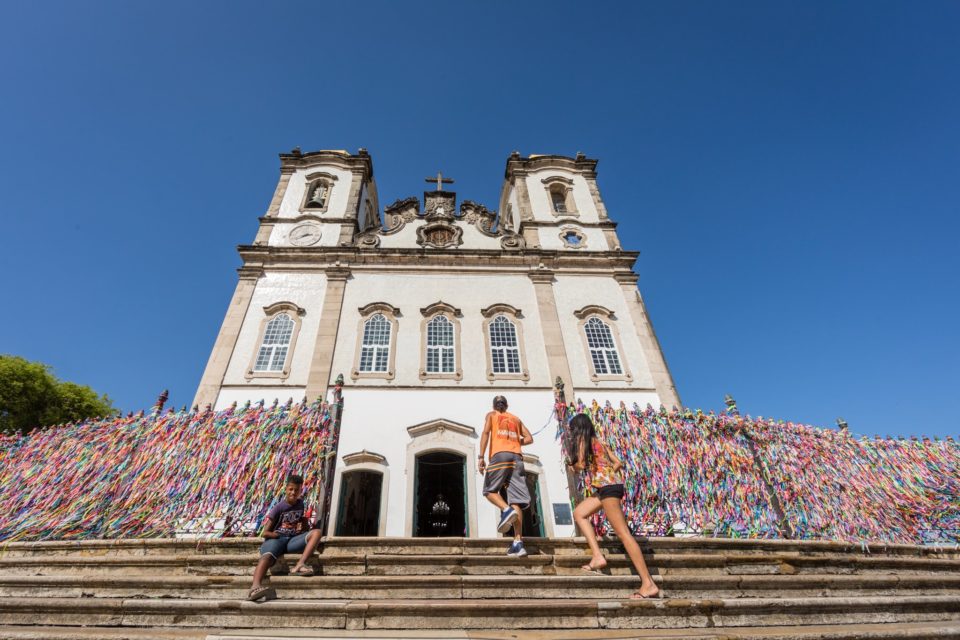 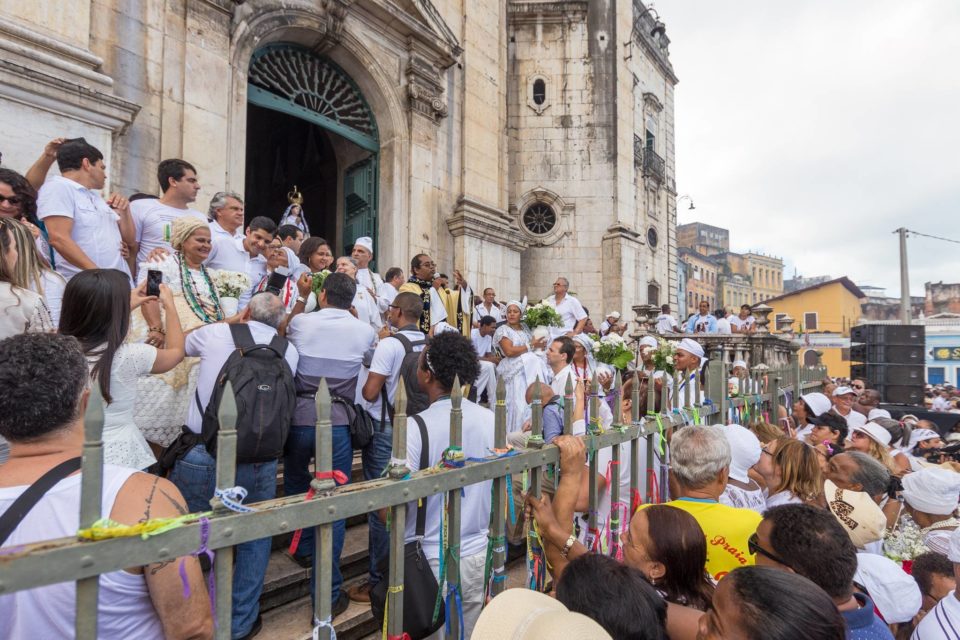 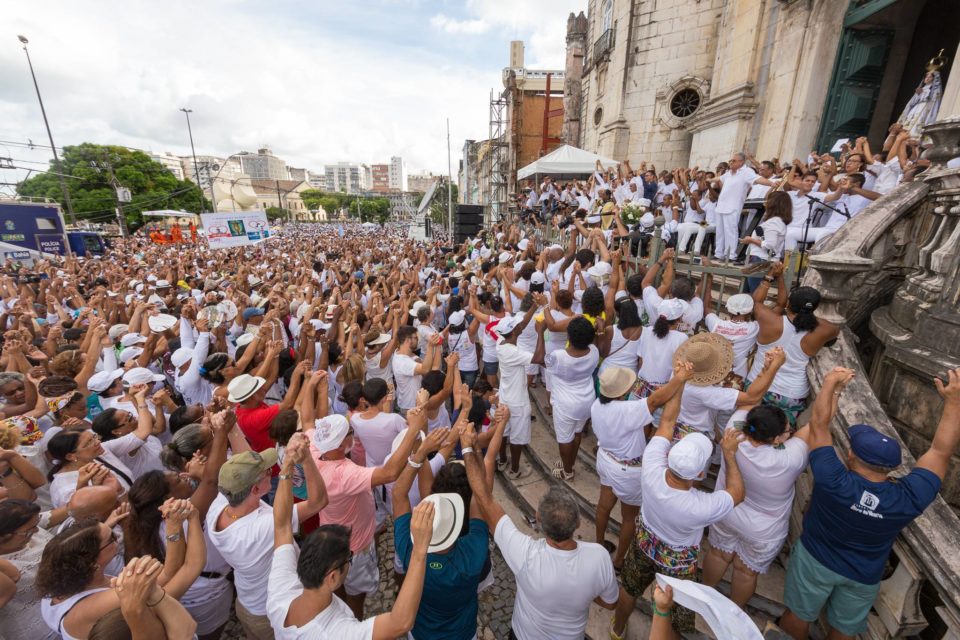 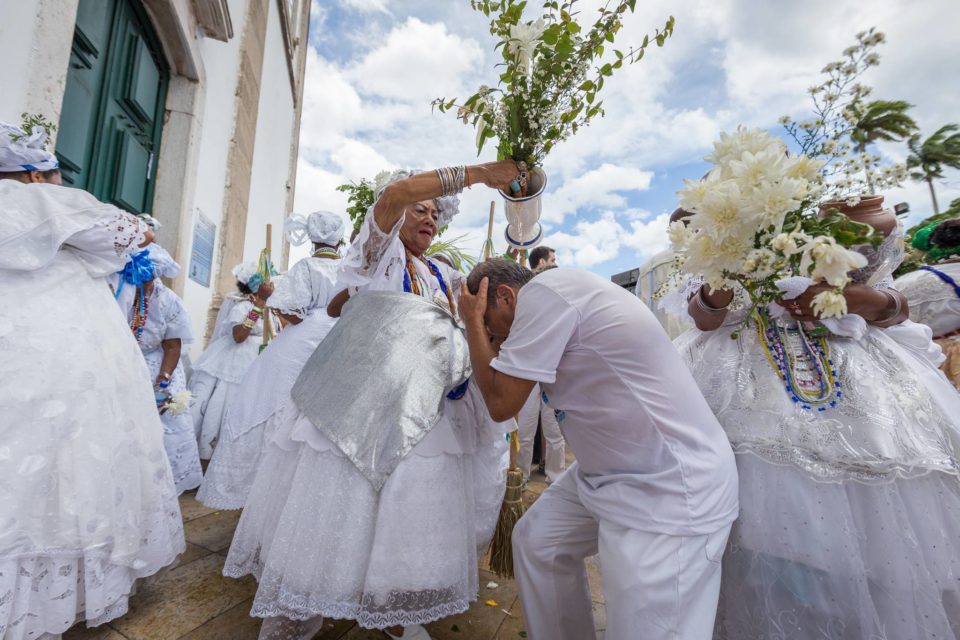