Walking around the city through the songs’ lyrics

Some clips and lyrics that talk about/show tourist attractions of this beautiful city! We’ll already start with a musical and aesthetic punch. The music, the light, the locations. Everything is excellent in this clip that happens between the communities of Solar do Unhão and Ladeira da Preguiça. Blitz the Ambassador – Running is a song that involves feeling and art. He is a rapper and visual artist born in Ghana, Africa and based in the United States, NY.

According to Daniel Tamenpi, one of the big names in Brazilian groove and hip hop scene and musical researcher of ‘So Pedrada musical’, the clip you see below is part of a trilogy of music videos under his direction of the songs ‘Juju Girl’ ‘Shine’ and ‘Running’ that will compose the EP “Diasporadical”. Diasporadical Trilogy had recordings in Accra, capital of Ghana, Brooklyn in the United States and here in Salvador Bahia, making a bridge between these three locations and their African diaspora.

The people involved in the clip are something else. It’s worth to search each of them in google. In addition to all the incredible team, here we highlight in the direction and edition (and also acting, marrying the bride and groom), Blitz the Ambassador himself. The production is from the witch of turbans, Thais Muniz (Turbante author project), which also acts, alongside Dai Costa as a saint’s daughter. In Still Photography, Guilherme Malaquias. Man, check his Instagram right now and go nuts in this guy’s poetic vision.

In the strong casting: Anita Costa (Mãe de Santo) – Anita has already been photographed by the unique look of Helen Solomon, another Instagram that is worth the visit; Loo Nascimento and José Flores (bride and groom), Loo has an authorial brand called DressCoração, is a digital influencer with a very interesting content, besides participating in Band Mulher channel searching for clothes in the city; the djs Sankofa and Dudu Caribe (demolition workers) who, besides being active in the Bahian scene (together they have the “Sistema Kalakuta”), Sankofa has the Rádio África program on Rádio Educadora FM. Tune in to it! Besides many other talents. And why are we emphasizing it??? Because the staff is 90% palm oil, my dear ones! It’s worth exalting it, right?

Another clip that draws attention to the location and coloring is the ÀTTØXXÁ group one, with the song ‘É sim, de Verdade’. They recorded at Parque das Dunas, the largest urban park of dunes, restingas and lagoons in Brazil. A reserve of about 6 million square meters located in Salvador, based on sustainability. Nature has given its futuristic touch to the clip, with its white mountains and amplified visual, to look all the way through the horizon.

And if we talked about the super new ones first, let’s go back to the superclassics. This version of the song ‘Bahia com H’, comes with Caetano Veloso, Joao Gilberto and Gilberto Gil. The music makes you walk through downtown, Baixa do Sapateiro, Charriot (in Comércio), Barroquinha, Calçada and Taboão. A walk through the townhouses, churches, saints and slopes not as touristy as the famous “postcards” of the city.

Another classic is with him, the king of pop, Michael Jackson with ‘They Don’t Care About Us’. Much of the video, which was produced by Spike Lee, takes place in Salvador, Pelourinho, and some scenes in Santa Marta favela in Rio de Janeiro. Besides the iconic location, Olodum samba-reggae sets the tone. In fact, Michael didn’t eternalize just the Afro Block shirt, worn throughout the clip, but also the balcony where he climbs at Pelô: until today tourists go there to photograph the building, famous since then.

Talking about Pelourinho, who has a very affectionate clip with the historical center is Rafael Pondé, music Maltrato (PRETA). He walks through the streets of historic stones and mansions, starting in Santo Antônio, passing through all the tourist attractions of the region. It makes you want to leave home immediately and walk in the streets with him.

He has also a clip that talks about the other side of the city: Pedra do Sal and Itapuã Lighthouse. Pondé’s song ‘Pedra do sal azul’ takes you by the hand to the sands and stones of a destination for those who want clean waters and paradisiacal visual. It is a place with coconut trees and typical vegetation and that in the empty tide is full of small pools. Search for the tide board and arrive there on the right time. You will not regret it. Nearby there is Itapuã Lighthouse. Just go!

From the sands of Itapuã to Abaeté lagoon, the song ‘Baiana’ by Emicida also happens at Dique do Tororó, at the headquarters of the sons of Gandhi in Pelourinho and goes to the Railroad Suburb, with scenes in a train station. The clip shows the beaches of the city, and the lyrics itself is a cultural Soteropolitan map, telling about customs, neighborhoods, talking about African blocks, all with a romantic bias.

The story takes place when a person takes a plane to Salvador, falls in love with a Bahian girl and goes to the Historic Center to enjoy carnival. It culminates with a concert of the own Emicida during the Barra-Ondina circuit. Our tip for those who have never been here: make a list with the entire lyrics of this song and get to know Salvador. It really goes through everything in this land. The icing on the cake? There is a delicate ft. with nothing less than Caetano Veloso.

Another stroll on the city was with the big diva Luedji Luna, who with her ‘Banho de Folhas’ (Leaves Shower), went through the streets of Santo Antônio, São Joaquim Fair, Lower City, and still a series of aerial takes of not so usual points for a tourist. In these takes you can see: Solar do Unhão community, Ribeira’s Edge, the Train Station, The Valentines Lighthouse in Ponta do Humaitá, Comércio and many others, besides a scene in the beach, of course!

The clip unfolding is filled with centenary houses, bougainvilleas, grids, colored walls, walks through Comércio, Baixa do Sapateiro, Ladeira da Montanha, cutouts of a daily life of the great majority of the population here. And we didn’t even start talking about the lyrics, the rhythm and her… Luedji Luna! Get ready to leave this song on repeat, it will be very difficult to stop listening!

And tell me, what city do you fit in? Upper City or Lower City? Listening to the song ‘Duas Cidades’ from Baiana System, the outsiders have a hint of what this phrase is all about. It is much more than a geographical division as many tourists think, in which Upper City is Pelourinho because “it is up there”. Ah! Silly mistake. This is a long, deep discussion in which the lyrics, let’s be honest, were written with mastery.

As we are talking about peculiar things to resident people, what about knowing the story of a great ‘urban legend’ in the city? Pitty and Cascadura did a beautiful job in the lyrics and in the clip ‘A Mulher de Roxo’ (The Woman in Purple). Research on your own, ask friends about it, this subject goes far because no one knows exactly who she was and what happened. But what remained is that the legendary Woman in Purple wore clothes of this color and was always walking through the streets of downtown.

It has images of the iconic coffee cart with very loud sound, Castro Alves Square, Sete de Setembro Avenue, San Pedro Clock, and another great character who walks around, crossing the whole city with his iron armor, Jaime Figura. Jaime is a plastic artist and the curious fact is that he never takes off his clothes, making people curious wherever he goes. The clip ends with old images and there is even one in which the real Woman in Purple appears.

Taking advantage of the fact that we are downtown, we will go to Rio Branco Palace, in Tomé de Souza Square, near the Lacerda Elevator. The hit of carnival 2018 ‘Banzeiro’, by Queen Daniela Mercury was recorded there. The craziest thing is to think that most of the people who have been to the Lacerda Elevator sometime in life haven’t even entered this Grand Palace! It had to be her, my dear ones, to record a carnival ball inside there!

It would be awesome if she decided to make this clip turn into a real story during carnival, with a very fancy carnival ball in those halls. And the power of this choreography! Wow! Ok… back to reality, on your next trip there, go to the side balcony and have a different view of the Elevator and the Bay. There are also scenes recorded on the edge of Rio Vermelho and in Largo da Dinha, but the star of the locations is the Rio Branco Palace!

Who also does a good job in the dance and the location, and that made a party in the carnival 2018 too was Mametto with the song ‘Matamba’. The clip happens at the National Museum of Afro-Brazilian Culture (MUNCAB) and at Mata Atlântica reserve of Patamares. Matamba, in the Bantu mythology, is the conductive energy of the Oyá orixá in the Ketu candomblé. Also called Yansan, she is the mistress of the winds, the storms, and the fire. The strength of this orixá was the inspiration for this song, which also reflected in the costumes.

Now do the following. Choose one of these clips, listen to the music, find out about each tourist spot, and go to the streets!!! There are a lot of them in our playlist on Spotify! So you can walk with a soundtrack! Have fun! 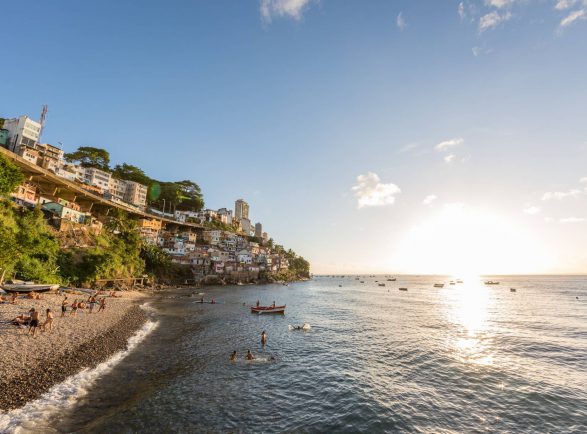 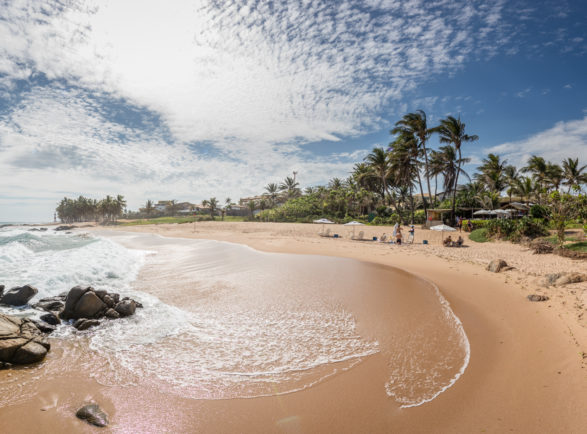 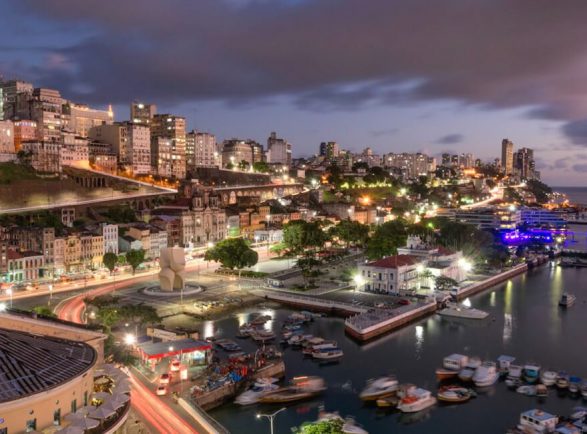 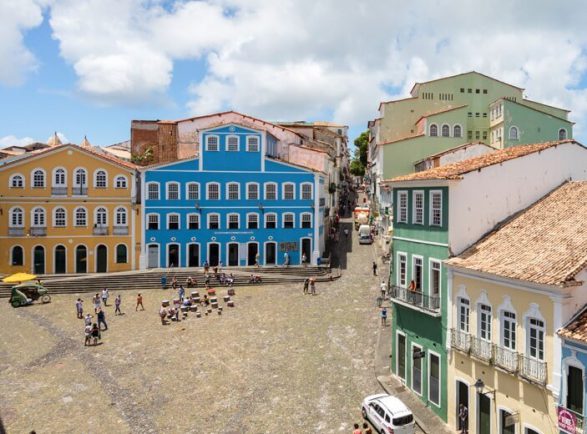 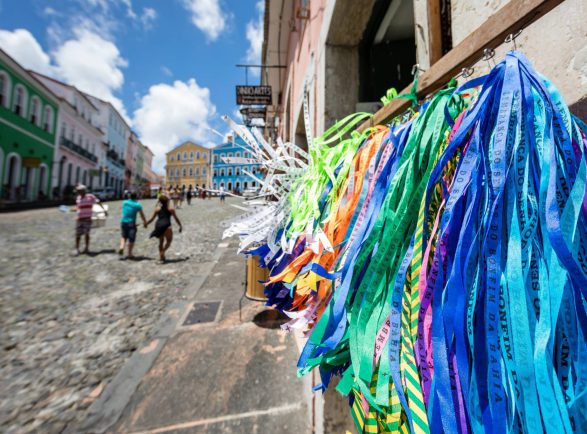 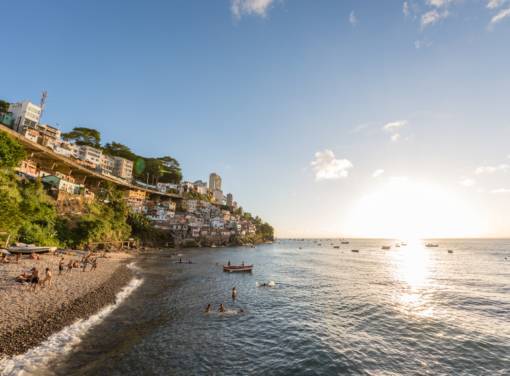 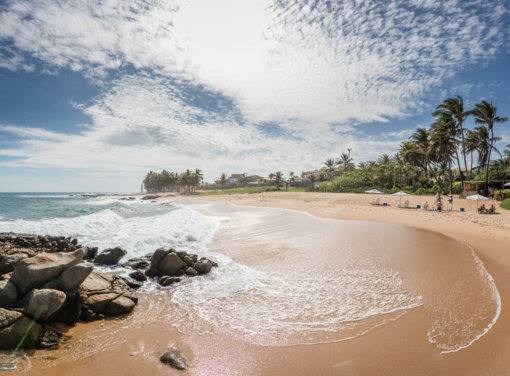 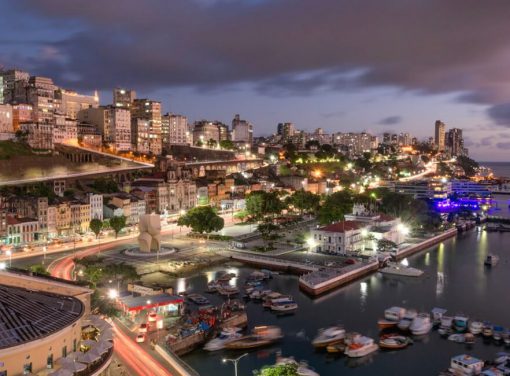 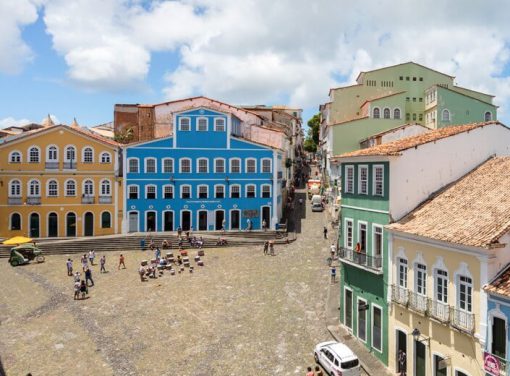 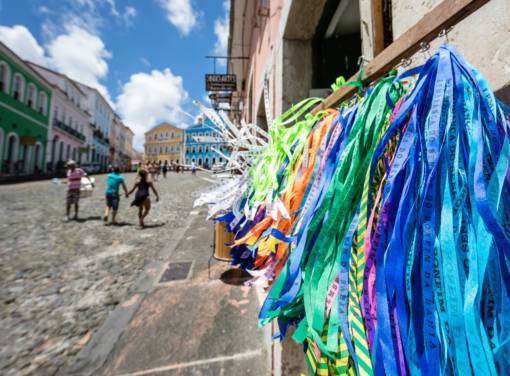 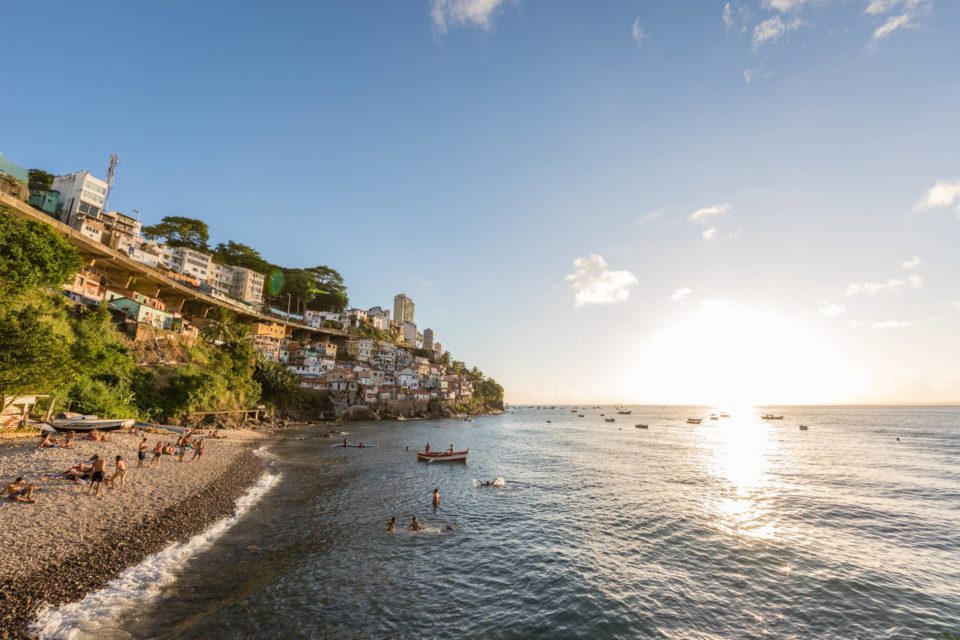 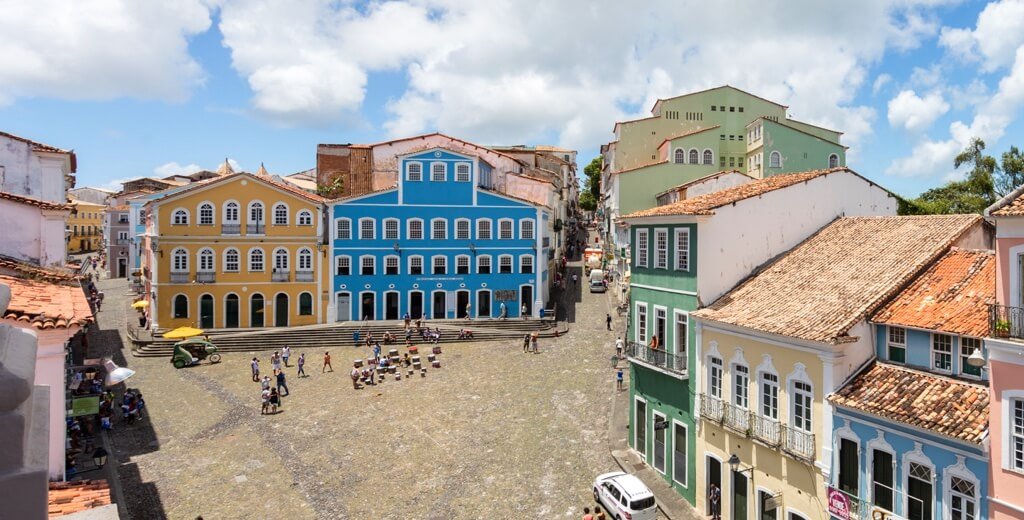 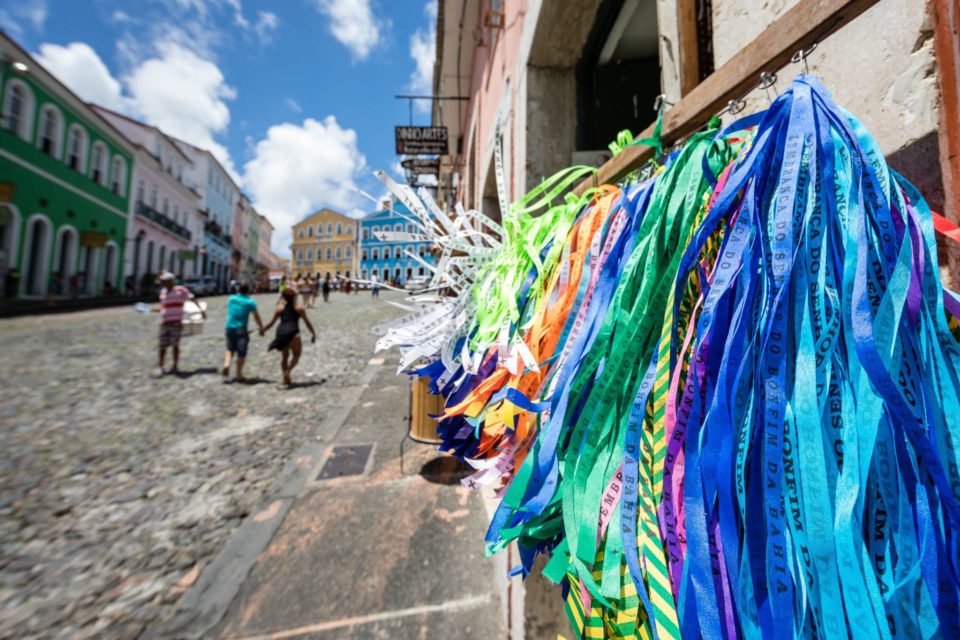