Tips and best beaches to practice the sport in the city 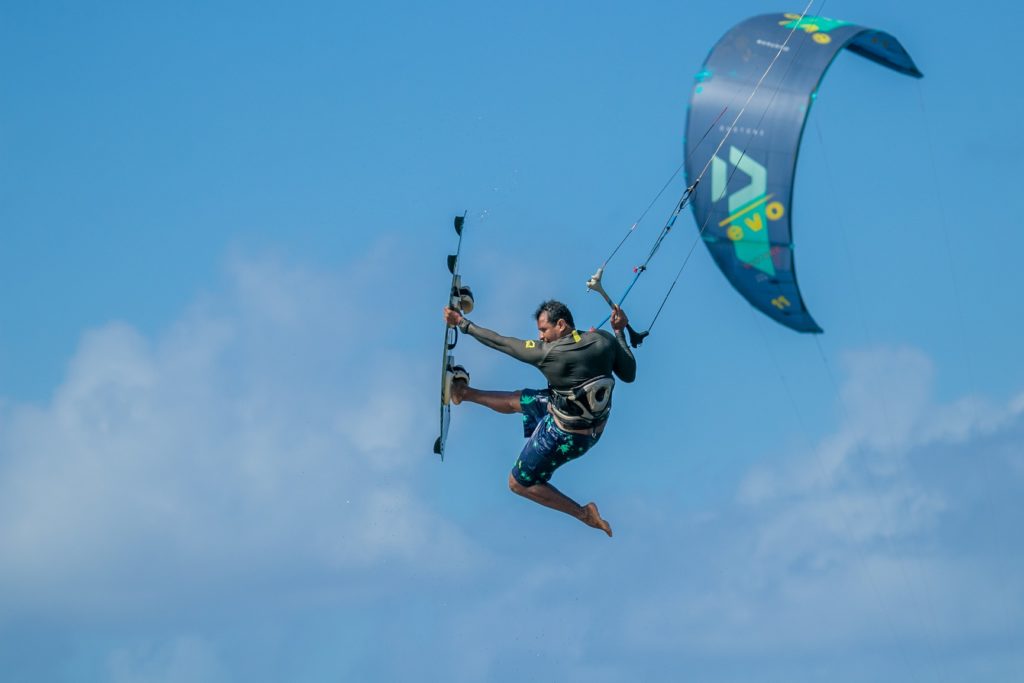 To practice kitesurfing, first of all, good weather and strong winds are needed. Nor age or weight makes it impossible for you to practice. Children from 9 years old on have the ability to start in the sport. And, oddly enough, it’s a sport that needs a lot more technique than strength. In theory, it’s a counterweight exercise: the kite puts you forward and you throw your body backwards, creating a traction in the water that propels you to glide.

In this itinerary, Visit Salvador da Bahia gathered tips on the practice of Kitesurfing in Salvador. You will know the best beaches, read explanations about the sport and curiosities that can make you want to discover a new water sport.

The best places to sail are Rua K, in Itapuã, which has a smooth sea, without waves; “Terceira Ponte”, at Praia de Jaguaribe, which is also great; and in Aleluia, in Lauro de Freitas, where you can sail on the waves.
Terceira Ponte is where the largest number of kitesurfers are concentrated in the summer. There are the guys that sail with the bidirectional board – one in a more square shape – in freestyle mode. People jump and pirouette in the air.

In winter, the south and southeast wind predominates. It’s another offshore wind. Then, the best place is near “Casquinha de Siri” (Piatã), as it is a small peninsula, being more protected. So, when the sea is stronger and/or the wind is offshore, this is the best place to go. It’s always calmer there. Conditions are also better for the people who are learning.

From September to February the northeast wind predominates. The best condition is with winds above 25km per hour. Some practitioners leave Aleluia or Buraquinho (Lauro de Freitas) and come down with the wind to Terceira Ponte, in Salvador, which is really cool. According to the kite surfer Gustavo Costa, 44, better known as Kombi, there are rides where it is possible to have up to 150 kite surfers in the sea.

The best way to sail is with the wind at least 13 knots (the strength of the winds is above 25km per hour) and for beginners, the kite can be small, from 2 to 3 meters, explains kite surfer Beto Oliveira .

The viral sensation is another kind of kitesurfing with a “flying board” – the foil – a high board that doesn’t seem to touch the water. In this modality, the board is up to one meter away from the water, and the keel, as if it were a wing (the hydrofoil), goes under the water. According to Gustavo Costa, the sensation is of being floating, there is no friction and no noise. This makes it possible to sail in light winds that, of course, on other boards, you would never sail. The wind can be 7 or 8 knots and the kite can be smaller (the wind pulls less).

The best way to learn

The best way to learn is taking a basic course, around 4 lessons, with two hours each. In addition to being an excellent physical exercise, it also relaxes and is fun. Other instructors offer 10 practice hours. It’s important to say that it’s not a sport where you’re going inside the water right away. Part of the instructions still start in the sand. Research the wind conditions and then just check out the best spot that day and head to your class.

Discover the history of some practitioners here in Salvador

Salvador has especially good stories when it comes to the sea. Maurício Sales de Jesus, known as “Pequeno”, was a car washer on Rua K, in Itapuã, sold cheese and popsicles on the beach, took care of boats, carried fish, until the sport changed his life. Pequeno started right there on Rua K when, on a winter day in 2000, he met Polo (already deceased) and Patrick Gonçalves – who raced in the 2010 GP Bahia race – one of the first sailors in Salvador. They were the ones who lent the kite to Maurício. Years passed and by 2004 he was already competing. He was very dedicated until, in 2007, he was ranked 9th in the national ranking. That’s when he decided to teach. It is in Terceira Ponte that Pequeno has the base of his kitesurfing school.

Beto Oliveira has been a kite surfer for 12 years and started teaching kitesurfing 10 years ago. In the beginning, he had a physical store, close to Lôro at Praia do Flamengo, but today the contact is made by telephone (71) 99989-3485. According to him, those interested in the sport have to understand that “it is nature that sets the time and place”. Beto explains that as the sport depends on the wind, it is necessary to be aware of the forecasts and only then make an appointment to meet the student, sometimes on Terceira Ponte, and others on the Aeroclub beach.

Another practitioner is the Soteropolitan Bruno Pitanga (@bppitanga), an athlete of various water sports such as surfing, SUP and kite. He has been surfing for almost 36 years and kiting for about 10 years. He was introduced to kiting by Brazilian champion Roberto Vieira, who always talked about kite wave: “I started training and never stopped, I even left surfing aside, which is my first sport”, says Bruno. Today, in Sri Lanka, Bruno says that the best places to kite are in Peru, in Lobitos and Pacasmayo, where there are super-extensive waves and the wind in the right conditions. In Brazil, the best is Ibiraquera beach, in Santa Catarina, which has very strong waves and winds. In Salvador, the best places are Terceira Ponte, Praia de Jaguaribe and Busca Vida, which is a place where there are not many people.

Gustavo Costa has a strong relationship with the sea. He is a pioneer of SUP in Bahia and a practitioner of this sport in the most diverse categories. He has paddled to Morro de São Paulo 4 times. He also practices fish paddle (or Paddle Boards fish) – trawl fishing on the SUP board. In 2012, Gustavo caught the biggest fish in Brazil in this modality: a 25 kg snapper, on the north coast, in Guarajuba, Bahia. Kitesurfing is an old passion. The sport he is passionate about now is kite wave.

Materials needed – A board, a belt (called a trapeze) and the kite.

Known place – “Terceira Ponte” is located on Jaguaribe beach, after the circus, right after the gas station. This beach is very long. It goes until Piatã. But just say the name and those who understand water sports will know where it is.

Offshore Wind (ON-SHORE) – The wind blows towards the beach at a 90 degree angle; you’ll be blown ashore immediately if you let your kite fall. That means the skill level is intermediate and experienced. You must be able to sail against the wind to keep away from the beach.

Downwind – It’s a way of sailing or even rowing downwind, that is, you go in the same direction as it points.

Kite Wave – It is possible to surf many waves in the session compared to surfing in the paddle. The side shore wind (the one that blows sideways on the beach) is the best. When you need power, just maneuver the kite to gain speed and maneuvers gain pressure, strength and radicality.

Known place – “Terceira Ponte” is located on Jaguaribe beach, after the circus, right after the gas station. This beach is very long. It goes to Piatã. But just say the name and those who understand water sports will know where it is. 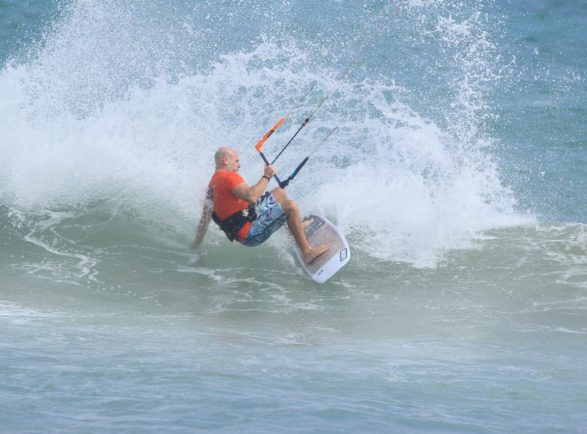 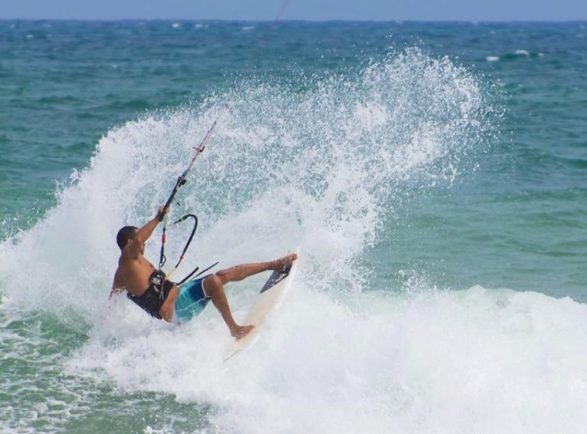 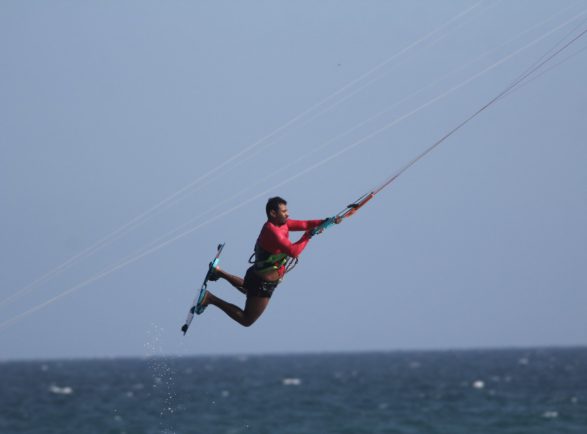 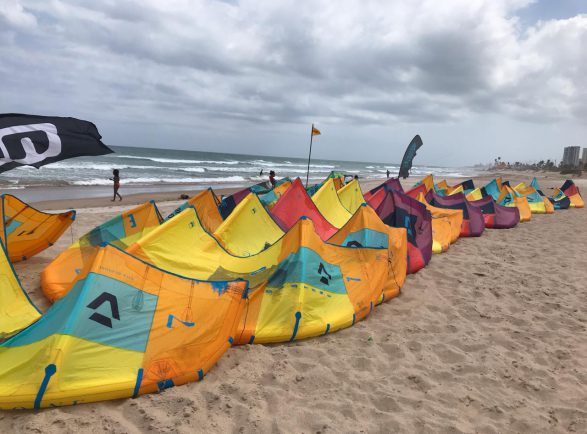 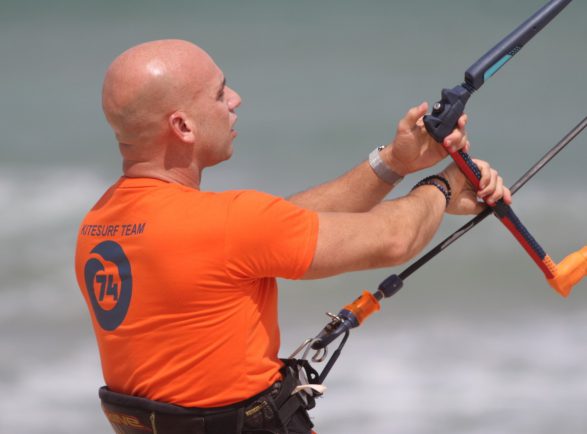 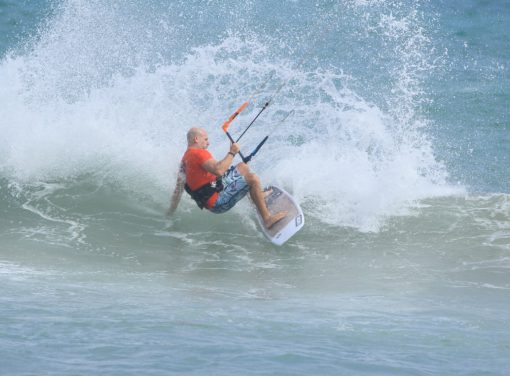 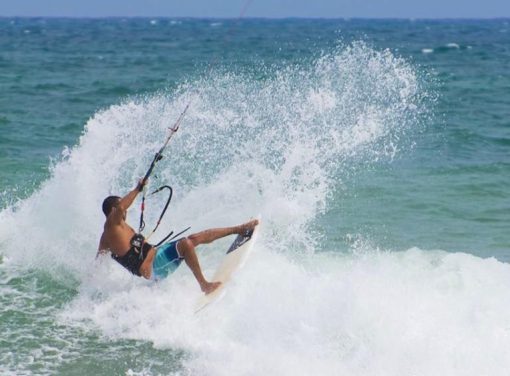 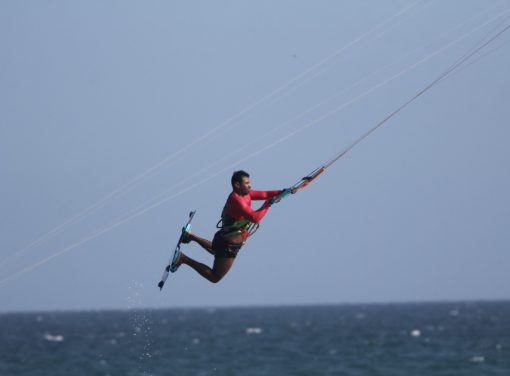 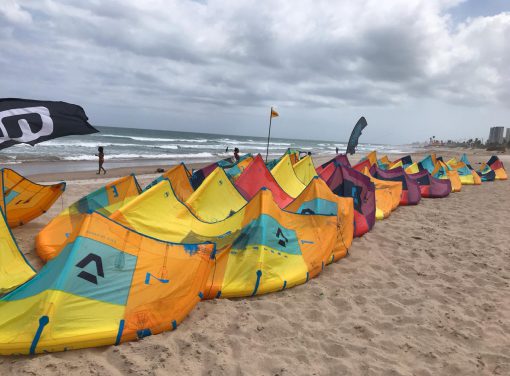 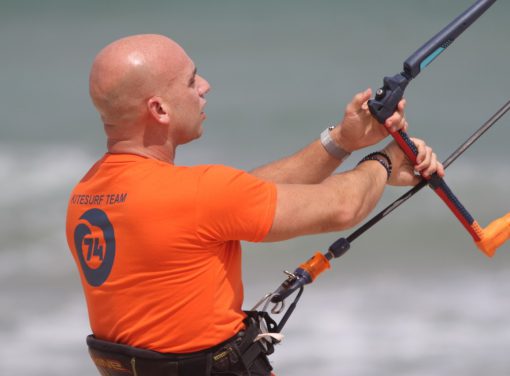 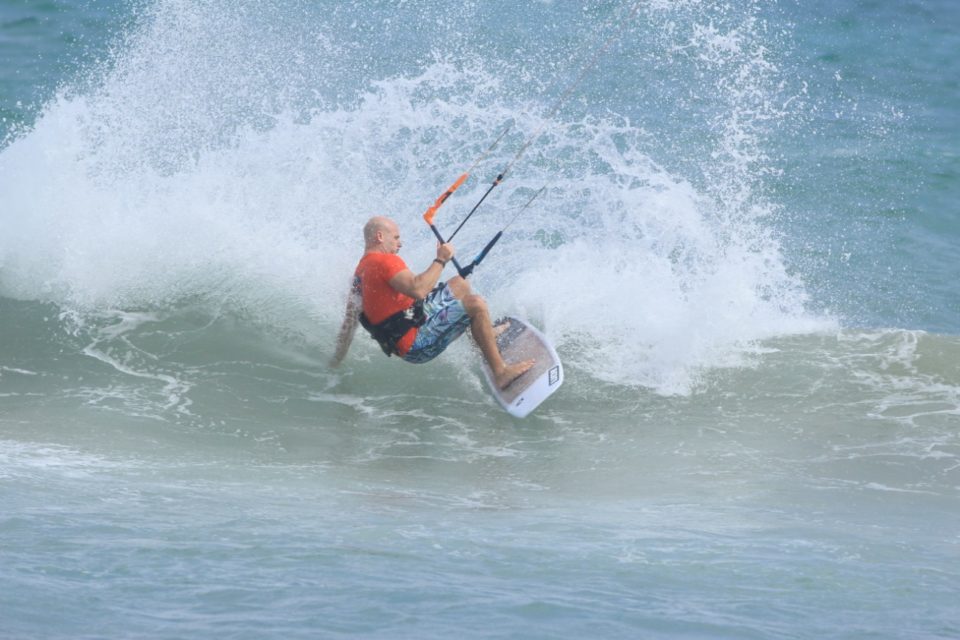 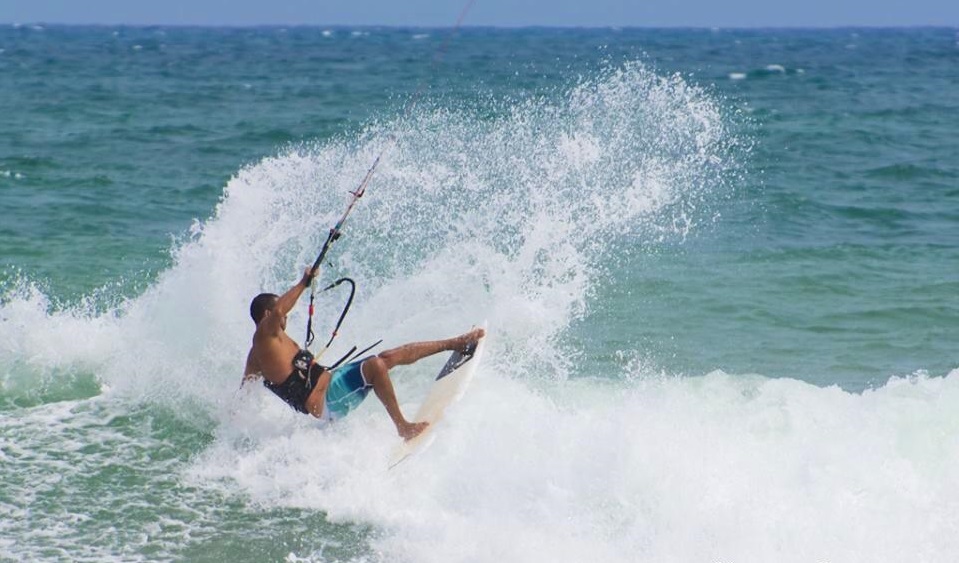 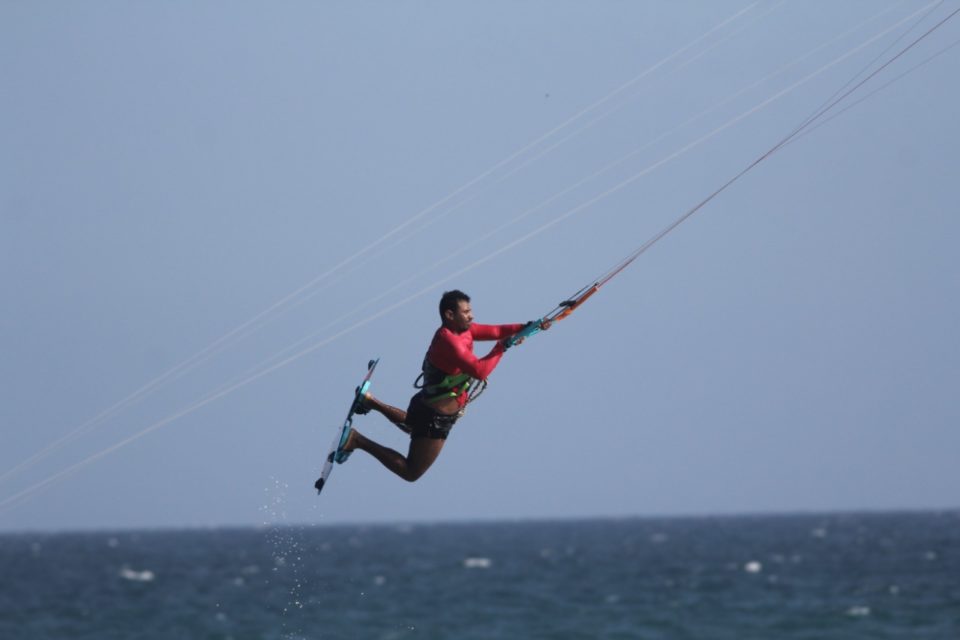 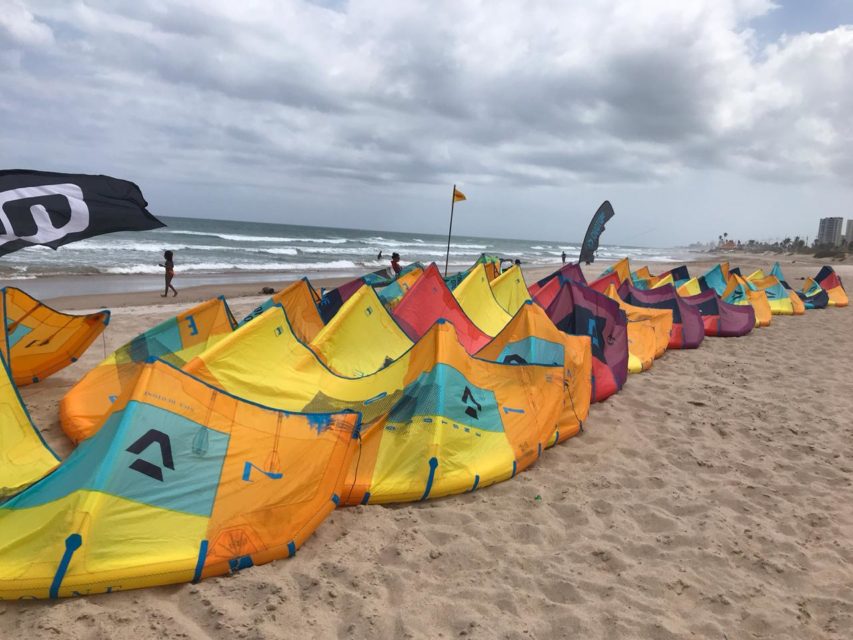 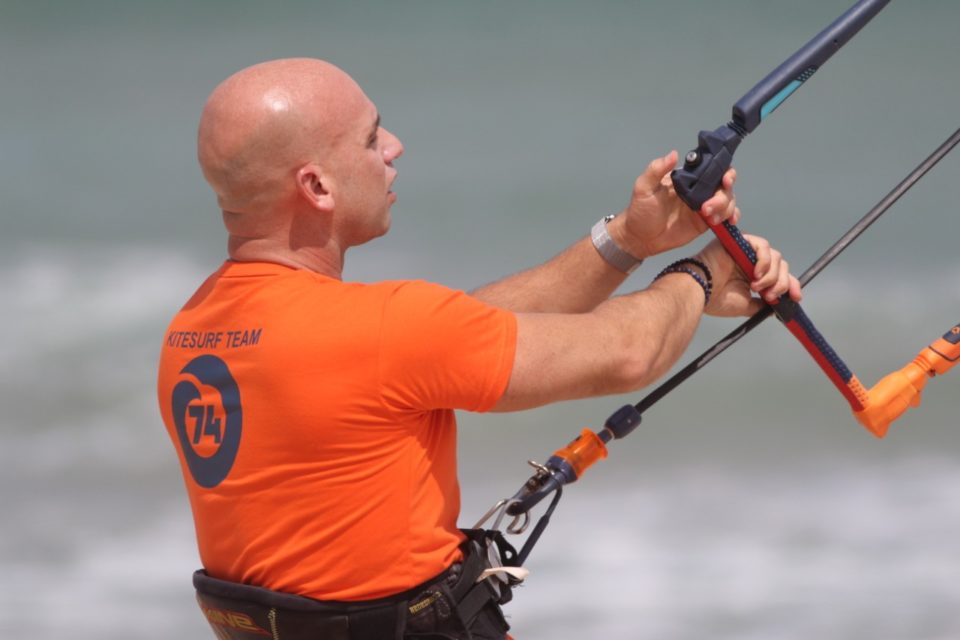