Summer Rehearsals shake up Salvador every week until Carnival arrival

Summer in Salvador is a big excitement. This is the most expected season of the year. There’s no lack of parties, shows and rehearsals. The cultural agenda of the city is so busy that there is not a day in the week without a programming, after all, Carnival is very close.

For those who don’t live in Salvador but want to know what’s going on here, this article tells a bit about the most traditional Summer Rehearsals in the city and also includes the season news. The rehearsals are previews of what we can expect for the official party days, so it’s worth to make a plan because every year the city catches on fire with the summer arrival. Come and mix it up.

In the repertoire, great hits of Léo Santana’s career, including the current working music, “Crush Blogueirinha”, one of the most played hits in the country and strong competitor to the Music of Carnival 2019. Baile da Santinha presentations happen on Fridays until February. Besides the many attractions, this is a great party, with jugglers, wooden legs and a structure designed for comfort with the Bloco do Nana Cabin, Frontstage Lounge and Harém Stage.

With the #ensaioraiz campaign, Harmonia do Samba decided to recover summer rehearsals essence, performing a more compact event, preserving the relationship with the public. The song “Respeite” is part of the album “Atualize-se”, recently released on digital platforms, and represents the synthesis of the feeling that involves the project.

Songs like “Tic Nervoso”, “Daquele Jeito” and also “Malandrinha” and “Vaqueiro Atualizado”, are part of the repertoire of the show that happens in Wet’n Wild and shakes the public. At each edition, the show also counts on other groups invited to cheer the public. Besides that, everything happens on a 360° stage, which allows the audience to be very close to the band.

Sensation among summer parties, the ATOOXXÁ group is doing a series of shows throughout the season. There are crowded editions full of beautiful people, a crowd that doesn’t stop dancing, dancing hard from the beginning till the end. Called “pagode of the future”, this band’s rhythm will invade your party and your head with songs that mix so many rhythms that it is difficult to stand still. Maybe you’ve already known them with the song “Elas Gostam” in partnership with Psirico, Carnival hit on 2018. The recent work, entitled “Tá Batenu”, has an awesome repertoire with “Caixa Postal” and “É Sim, de Verdade!” and many other hits.

Going from one musical universe to the other, Bailinho de Quinta is all about Marchinha de Carnaval (a genre of music typical of Brazilian Carnival, very popular from the 20’s till the 60’s), confetti, streamer and joy! They make parties that take revelers to the streets of one of the most charming districts of Salvador: Santo Antônio Além do Carmo. They also give shows in Pelourinho’s squares and parties around the city. These are dancing shows, with old carnivals successes, and it is common for the audience to use costumes. 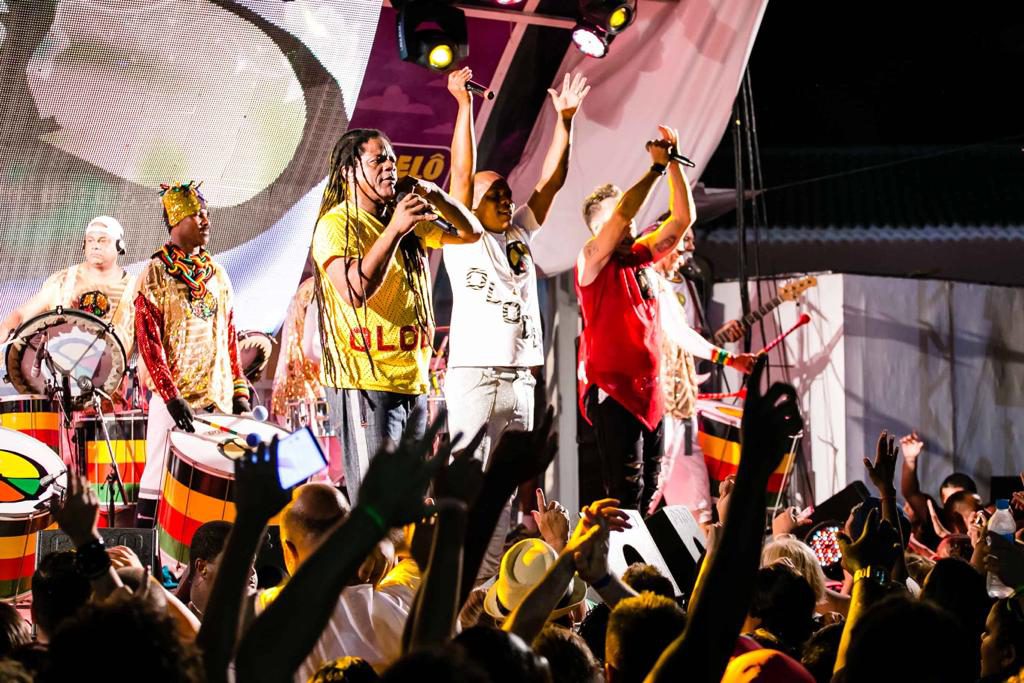 One of the most popular musical groups in Salvador, Bloco Afro Olodum needs no introduction; after all, it has been taking the Afro-Bahian musical culture to Brazil and to the world for 40 years. They celebrate the date at this year’s carnival, with the theme: “The Two Stories: The Perfume of Roses”. We can already expect big surprises. The Group does its rehearsals on Tuesdays in Pelourinho, one of the city’s must-see classics. 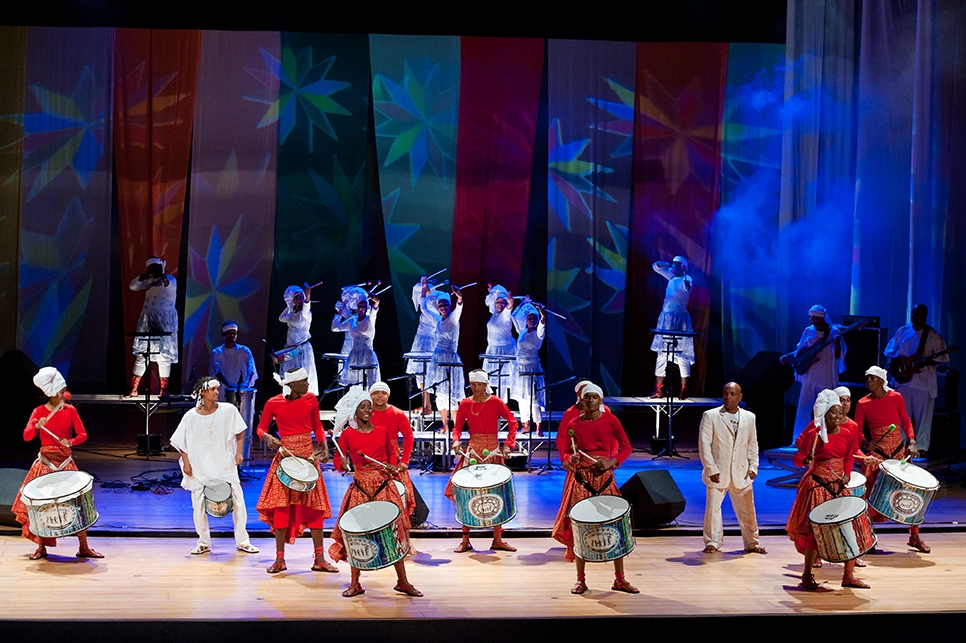 Cortejo Afro rehearsals are always on Mondays, in Pelourinho, and they always have special guests. During the show, which has Alberto Pitta’s artistic direction, the band shakes the public by the sound of their compositions, mixed with re-readings of MPB songs, Pop music and percussive beat, promoting innovative aesthetic experiences that bring dance, music and visual arts together in the same spectacle. 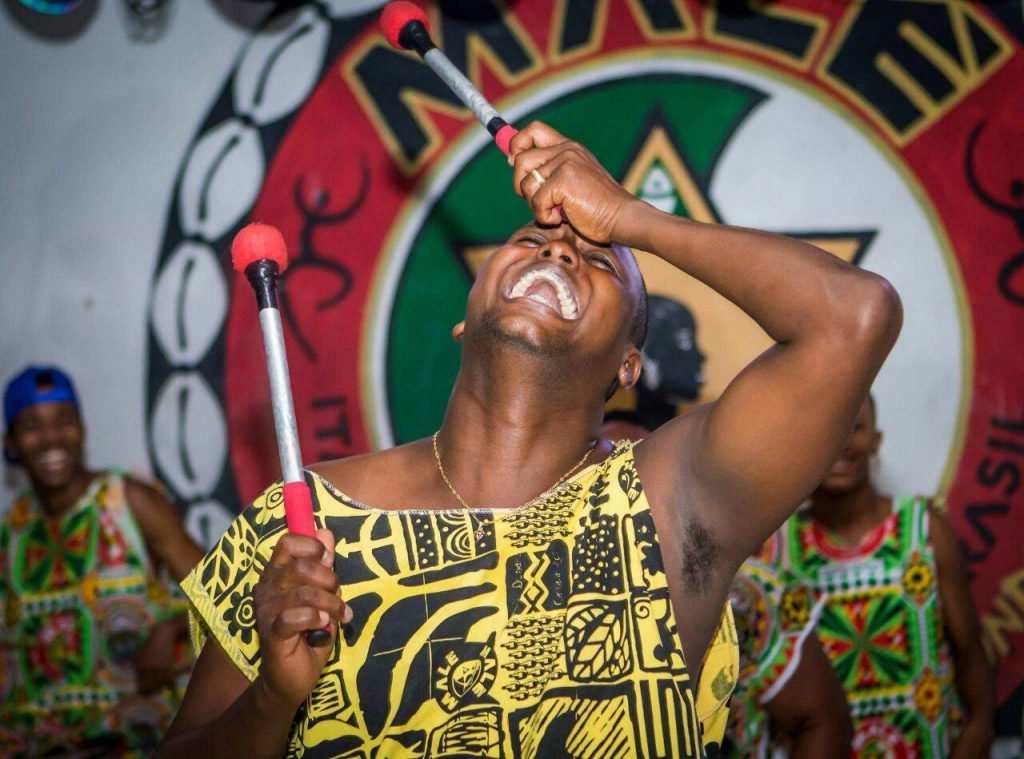 Malê Debalê Group has an extensive calendar throughout the year, especially in the summer. Every year, it promotes the Malê Music Festival and the Malê Black Man and Black Woman Competition. The group also integrates children with the Malezinho Black Boy and Black Girl Contest, all of them in their own headquarters, in Itapuã. Malê rehearsals take place on Thursdays in Pelourinho and happen until February.

Filhos de Jorge stands out in Bahian music for its percussion mixed with a dancing sound with Latin influences. The group brings in its front line Daniel Vasco, Arthur Ramos and Marta Lan and a repertoire that brings together since those songs that have made history to the newest one recently launched “Saudade de Você”, composition of Arthur Ramos and Neto de Lins.

Denny Denan left Camaçari and went to Candeal, where he stayed in Timbalada for 25 consecutive years. Now he’s on a solo career with his own musical project. In the new solo project, the singer, composer and multi-instrumentalist musician rescues an old desire of his: to present on the world’s stages all the artistic and musical plurality, resulting from a history built on a lot of work, study, research and learning.

Back in Pelourinho, to shake Thurdays’ nights with its unmistakable rhythm and Afro-Bahian percussive beat, singer Jau does his summer rehearsals season until February and will count on special guests’ participation.
Jau comes from Olodum music festivals. With a consecrated career over the years, his compositions were recorded by countless artists: “Estrela Primeira”, in Netinho’s voice; “A Camisa e o Botão”, with Cláudia Leitte; “Topo do Mundo”, recorded by Daniela Mercury; “Fanfarra”, by Araketu, among many others.

The rehearsals of Parangolé Group, also known as Parango, are the news of Bahian summer 2019. Under Tony Salles direction, every Sunday in January, in Salvador, at Fonte Nova Arena, your return from the beach will be even funner. Considered one of the biggest pagode bands nowadays, Parangolé performs shows full of surprises, including supershows of the host band and special guests.