They are historical heritage and urban mobility options in the daily lives of residents and visitors, in addition to providing access to the city’s tourist attractions. Not to mention that they are excellent places for photos, as they give access to horizons with unusual angles in the Historic Center.

Users can also take a bicycle per trip in the cabins, which allows for an even more comfortable and safe transportation, avoiding the slopes that connect the regions. In addition to the famous Elevador Lacerda, cyclists can also transport their bikes on the Pilar and Liberdade inclined planes, since 2013, and on the recently renovated Elevador do Taboão, which connects Pelourinho to Comércio.

Visit Salvador da Bahia tells here a little of the history of each one, informs the opening hours and even tells you the closest tourist points of interest to each one of them. Let’s go! 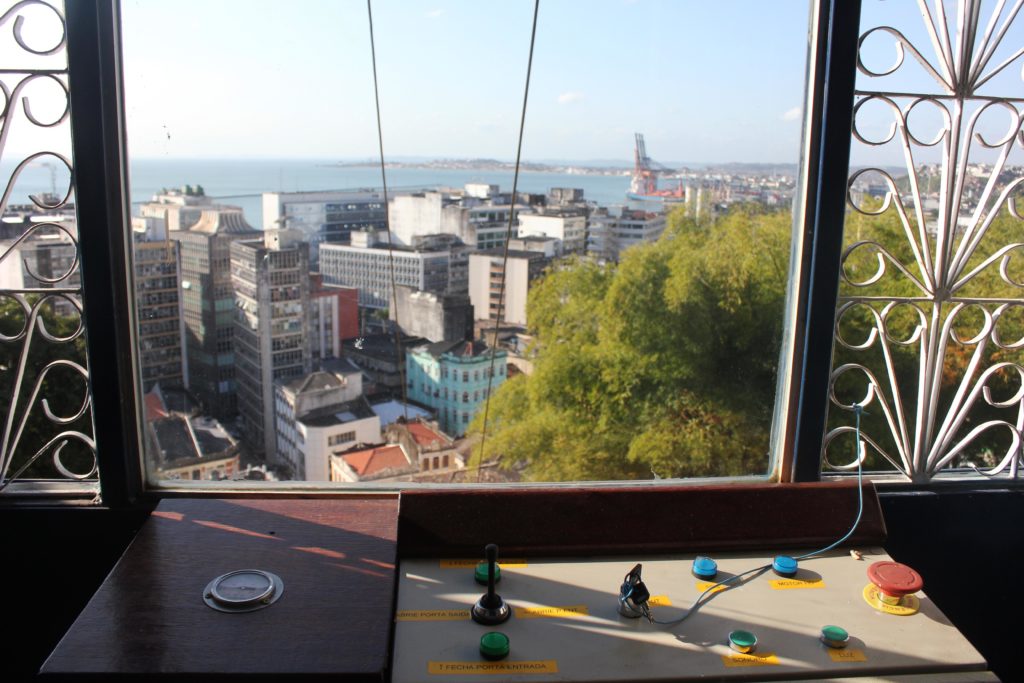 The Gonçalves Inclined Plane (Plano Inclinado Gonçalves – PIG) ​​links the region of Pelourinho to Comércio, and has its origins in the 17th century, when a crane used to transport material for the foundation of Colégio dos Jesuítas. It was only in 1889 that the crane was transformed into an inclined plane and, in 1910, its operation was electrified.

Currently, around 1.2 thousand users are transported per day. The equipment works from Monday to Friday, from 8 am to 6 pm, and the fare is R$0.15.

Casa do Carnaval (Museum of Carnival)
All attractions in Pelourinho, in the Historic Center of Salvador
Bars and restaurants in Pelourinho

Lacerda Elevator is the first urban elevator in the world. On December 8, 1873, when it opened, it was the tallest in the world, at 63 meters.
Today, it is one of the main tourist attractions and postcards of the city. From the top of its towers, you have a beautiful view of the All Saints Bay, the Mercado Modelo and, in the background, the Fort of São Marcelo.
The most famous elevator in Bahia can transport 900 thousand passengers per month or, on average, 28 thousand people per day. Located in Praça Municipal, in the Historic Center of Salvador, it serves as public transport between Praça Cairu, in the Lower City, and Praça Tomé de Sousa, in the Upper City.

Open Monday to Friday from 7am to 10pm. Saturdays, Sundays and holidays from 7:00 am to 7:00 pm, at the cost of fifteen cents of reais per passenger, in a journey of thirty seconds. And, so as not to frustrate the ones who are unaware, we will tell you: Lacerda Elevator is not panoramic!

Points of interest near the Lacerda Elevator:

It worked until 1984, when it served around 3,000 passengers a week. After the end of operations, the place was invaded by homeless people, who occupied it until the beginning of the requalification works, in 2005, being reopened on March 29, 2006.

In 2013, the plane was deactivated for a new requalification, being reopened in August 2015. Currently, 190 users are transported per day by the equipment, which operates free of charge from Monday to Friday, from 7:00 am to 5:00 pm.

Points of interest near the Pillar Inclined Plane:

In the Upper City

In the Lower City

Taboão Elevator is already a tourist and mobility attraction for the population of Salvador. Have you ever heard of this elevator? In 2021, the City of Salvador re-delivered this lift to the city, after a few decades inactive. The Taboão Elevator has received tourists and people from Salvador who are curious to learn about its history and use it as a new means of daily transport. It is one more option that can be used to link Pelourinho and Comércio.

Completely recovered, the equipment was reactivated after 60 years of being inactive. Taboão Elevator has areas with tables, restrooms, a suspended forest garden, as well as fully modern, air-conditioned cabins and a panel containing its history.

Functioning: the elevator cabin can hold up to 14 people, but due to the pandemic, only eight people are being transported at a time, following safety protocols. It is open from Monday to Friday, from 8 am to 5 pm, with free access for an indefinite period.

Points of interest near the Taboão Elevator:

The Liberdade-Calçada Inclined Plane, or Pilc, was inaugurated in the early 1980s, connecting the Liberdade neighborhood – one of the most densely populated neighborhoods in Salvador – with the Calçada neighborhood. The elevator is close to where the Subúrbio Train used to work, deactivated earlier this year for the construction of the tram at the site, by the State Government.

After undergoing refurbishment, the lift was delivered fully recovered in 2014. Currently, the equipment transports around 4,000 users per day, free of charge, and operates from Monday to Friday, from 6:00 am to 6:00 pm and on Saturdays from 7:00 am to 1:00 pm.

Points of interest near the Liberdade Inclined Plane

Carnival – The traditional Afro Group Ilê Aiyê leaves Senzala do Barro Preto, in Curuzu, and walks through the neighborhood, to the sound of the group’s music, to the inclined plane of Liberdade. From there, they go on to their first performance, traditionally at Circuito Osmar, in Campo Grande.

Bust of Nelson Mandela – There are monuments in Salvador that tell the story of the resistance of the black people. In Liberdade, for example, there is a tribute to the former president of South Africa, from 1994 to 1999, the main representative of the anti-apartheid movement, Nelson Rolihlahla Mandela. The cast bronze bust is located at Largo da Liberdade, in front of the Inclined Plane.

Learn more about mobility in Salvador at this link. http://www.mobilidade.salvador.ba.gov.br/index.php/noticias