How many times have you walked by a church, museum or gallery and said: one day I’m going to get in to see what’s inside? There must already be countless sunsets, sea baths and gastronomic posts saved in your Instagram bucket list. Places that you have heard about, you know where they are, but you have never been there.

With that in mind, Visit Salvador da Bahia has gathered here a list of tips in a quick itinerary with just three to five stops – so you can go slowly and check your tourist wish list in Salvador. There will be short walks with a beginning, middle and end, indicating museums, churches, bars, restaurants, cafes, etc.

The idea is that you get to know the city your way, in your own time, with little commuting between one stop and another, but still immersive. You will get to know Salvador intensely with us! Let’s go for the first part of this tour.

1. The patroness of Bahia! 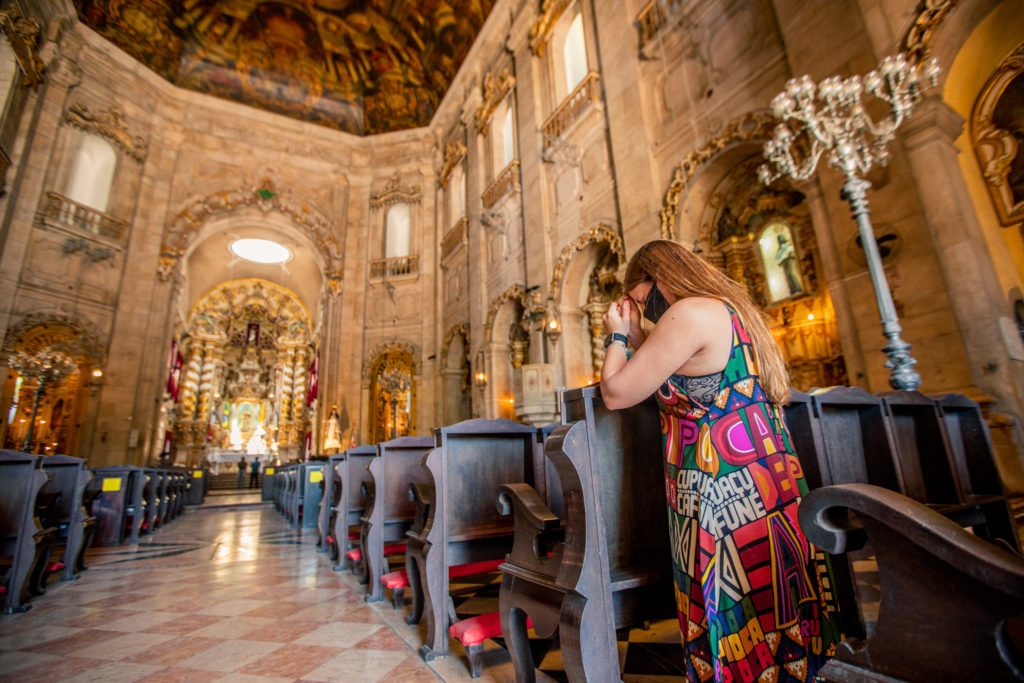 Your tour begins in the Lower City, at the Basilica of Our Lady Conceição da Praia. The Church is close to the Mercado Modelo, next to the Lacerda Elevator. So let’s get to know all of these places.

The church project was developed in Portugal and its current construction, in Baroque style, was made entirely of lioz marble brought from there. The stones were glued together with whale oil and the work lasted 300 years, involving three generations of artisans. It is the only modular construction church in Salvador.

Did you know that this is where the famous Lavagem do Bonfim begins? From the top of this beautiful church tower, you have a breathtaking view!

The floor is made entirely of lioz marble and Carrara marble, one of the wonders of the place. Inside, there is the “primitive church”, where the church “began”. This part has been kept in ruins and is full of candles. On the side, there is a window from which you can see the stairs that were the first connection between the Lower City and the Upper City.

2. A beer on the balcony with a beautiful view

For those who want to visit a historic place and stop a little for hydrating or eating, the Mercado Modelo is perfect. And on the cozy balcony, you can take really cool photos of the city.

Inaugurated on December 9, 1912, the Mercado Modelo used to be the main supply center in the city of Salvador. The products arrived from Recôncavo in sloops and from small farms around the city.

The first building that housed the Mercado Modelo was between Casa da Alfândega (Customs House), the current building, and the Sailor’s Apprentice School, in front of the Mercado ramp. Only in 1971, after a fire in 1969 that completely destroyed the old building, Mercado Modelo moved to Casa da Alfândega, an imposing federal building, listed by the National Institute of Artistic and Historical Heritage – IPHAN in 1966. The building reproduces consecrated neoclassical forms from the second half of the 19th century, with a square floor plan and a circular building at the back, which used to be a dock for cargo ships.

There, you will find several restaurants. On the ground floor, the restaurants have a counter, and you can decide whether to eat standing up, watching the movement of the market (and the pans on the stove) or on the outdoor tables, watching the capoeira presentations. Upstairs, the restaurants are larger, with an indoor lounge and a balcony with tables facing the sea. These are named after Soteropolitan personalities: “Maria de São Pedro” and the “Camafeu de Oxóssi”, paying homage to the former owners.

Maria de São Pedro was one of the largest and most celebrated cooks in Bahia, a forerunner of the art of having a traditional Bahian food restaurant. Odorico Tavares, Jorge Amado, Orson Welles, Sartre and Neruda tried her food. Camafeu de Oxóssi was a capoeira master, president of Afoxé Filhos de Gandhi, Obá de Xangô in Candomblé, musician and composer. He was one of the iconic personalities of the Bahian capital, mentioned in books and songs.

3. The first urban elevator in the country

Who has ever heard of the Lacerda Elevator? A classic from Salvador. Enjoy the trip and lets go to the Upper City!

Lacerda Elevator is a public transport system in the city of Salvador, which connects Praça Cairu, in the Lower City, and Praça Tomé de Sousa, in the Upper City. It is one of the main tourist attractions and postcards of the city.

On December 8, 1873, when the first tower was inaugurated, Lacerda was the tallest elevator in the world, at 63 meters high. The current structure, from 1930, is 72 meters high. When you first went there, did you think it was panoramic? Well, it isn’t! Like you, a lot of people also wish it was.

Service
Lacerda Elevator
Location: in the Lower City – Praça Visconde de Cayru, Comércio. In the Upper City – Municipal Square (Praça Tomé de Souza, no number, Centro de Salvador – BA 40020-000), Historic Center, Salvador.
Ticket: R$ 0.15 cents each trip.
Opening hours: Monday to Friday, 7 am to 5:30 pm. Saturdays from 8 am to 5 pm. On Sundays, due to the coronavirus pandemic, the elevator is not operating.
Accessibility: the elevator cabin has good space for wheelchair users. In the Upper City, the parapet is high and the floor is irregular, with difficulties for wheelchair users.
Phone #: 71 3202-7655
E-mail: elevatorlacerda.secultssa@gmail.com

Those who like tasty and classy food need to visit the new restaurant at Fera Palace. In addition to enjoying good cuisine, you will also discover the hotel’s charm.

Fera Palace has a new restaurant where the concept was signed by the award-winning duo of Soteropolitan chefs Fabrício Lemos and Lisiane Arouca (Origin).
At Omí, seafood and fish are the captains of the menu, but there is also space for meat and options for vegetarians and vegans. In preparing the dishes, Mediterranean cuisine techniques are applied, which is one of the chef’s specialties.

Its facade impresses those walking on the street and guests are enchanted by the design and elegance of Art Deco architecture in harmony with Bahian elements. From the glamor of the 30s to being located on the first street in Brazil (Rua Chile) the restaurant gives you many reasons to stop at the sign and take that classic, tourist photo.

In the past, this street was recognized as the main commercial address of the city, with several designer stores, hotels, cafes and restaurants – practically an open-air shopping mall.
In 1934, the Palace Hotel was created, which received numerous celebrities and important figures, such as Carmem Miranda, Grande Otelo, Pablo Neruda, Orson Welles and several presidents of the republic. And now, in 2021, you! (lol)

5. A nice view and an ice cream

After a delicious meal, go back one place on the game board (lol), to Lacerda Elevator, where the Sorveteria A Cubana is located, and let’s have some dessert. How about the famous Maltado da Cubana – ice cream shaken with cold milk and powdered milk – or an ice cream made from pitanga, mangaba or coconut?

Another option is the Cubana cake, which is actually 90 years old and is made with an authentic and soft white cake from a secret recipe of the house, topped with powdered cocoa syrup and chopped nuts on top.

In addition to enjoying the delicacies, you can admire, from above, the view of the All Saints Bay, from where you can also see the Mercado Modelo and, in the background, the Fort of São Marcelo. The photos will be beautiful, especially for the stunning sunset. This is an excellent place to understand a little bit about these two parts of the city: Upper City and Lower City.

This was the first ice cream shop in Bahia, opened in 1930, together with the reopening of Lacerda Elevator, which underwent an expansion and reopened that year. The A Cubana ice cream parlor received this name because it was founded by a Cuban living in Brazil. His family would have an ice cream shop in the United States and, upon coming to Brazil, he decided to open a store here. 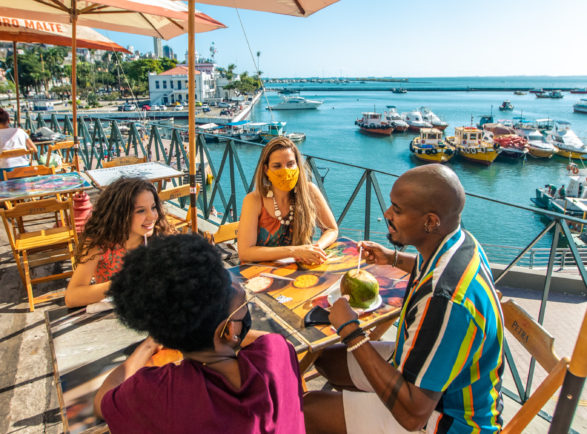 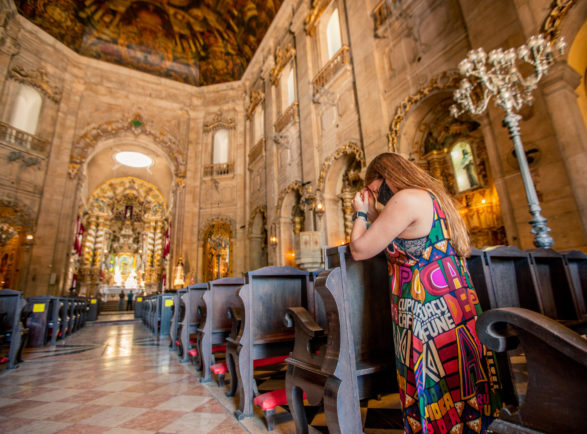 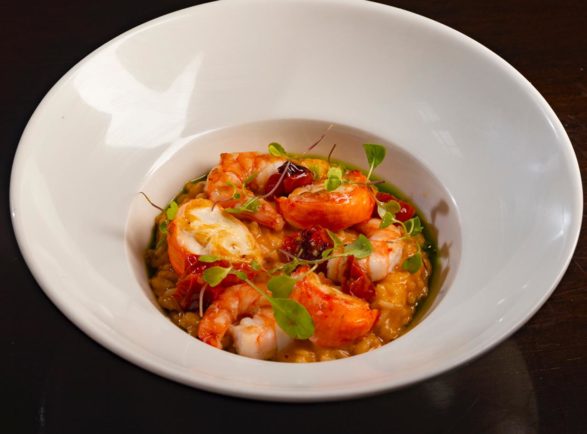 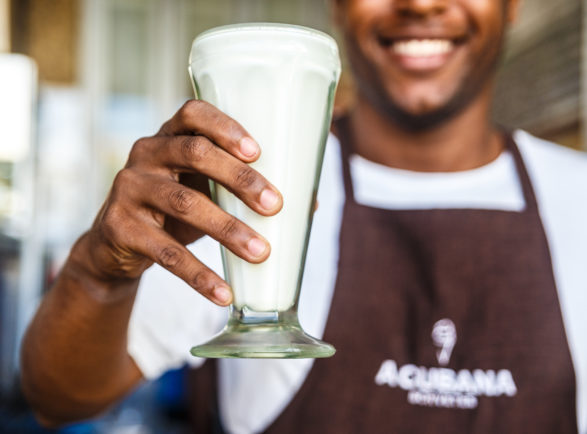 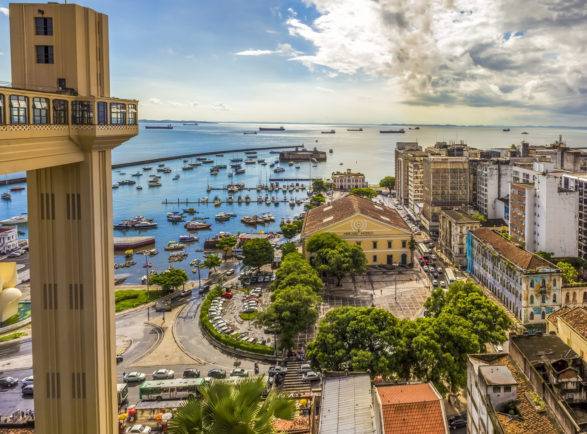 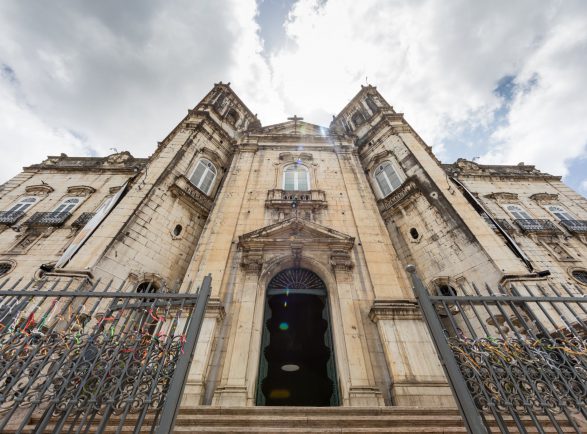 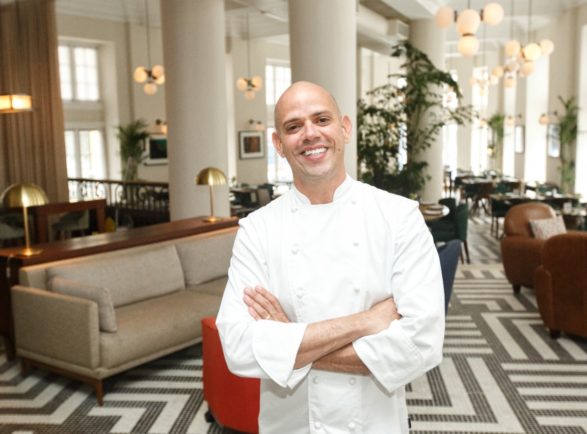 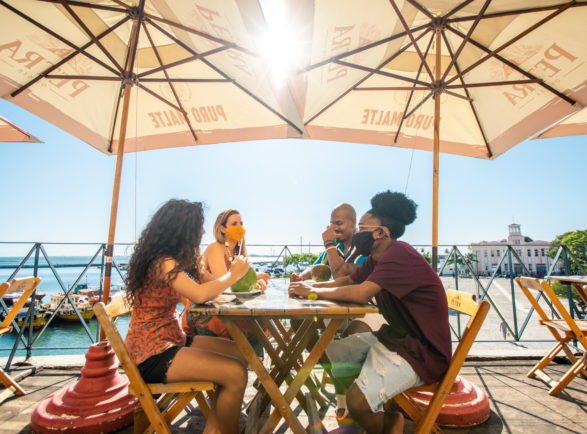 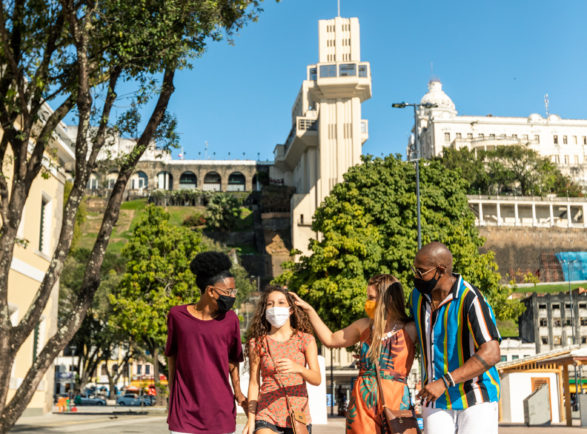 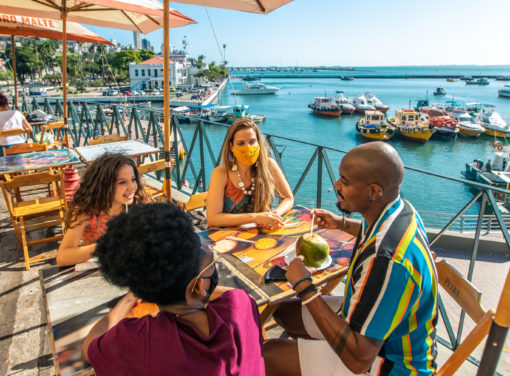 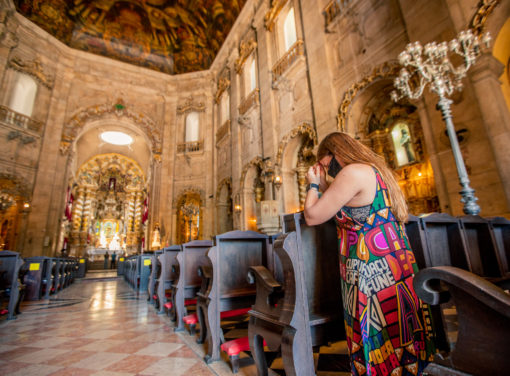 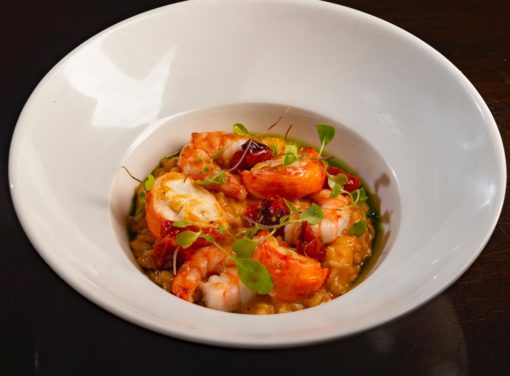 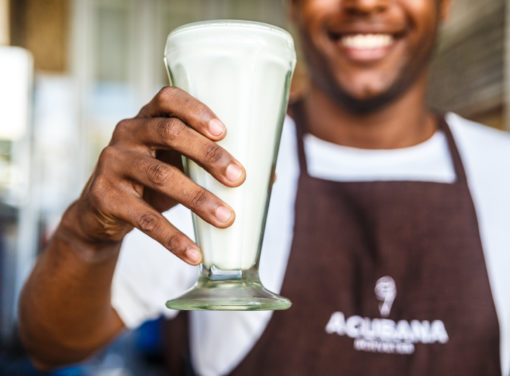 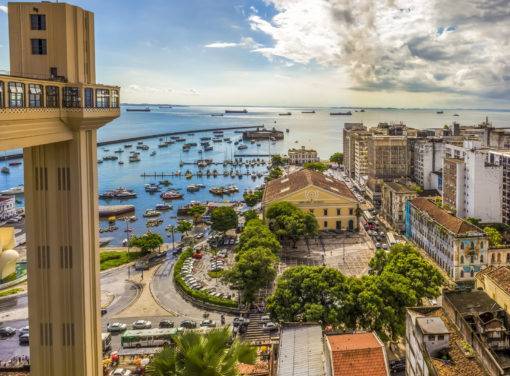 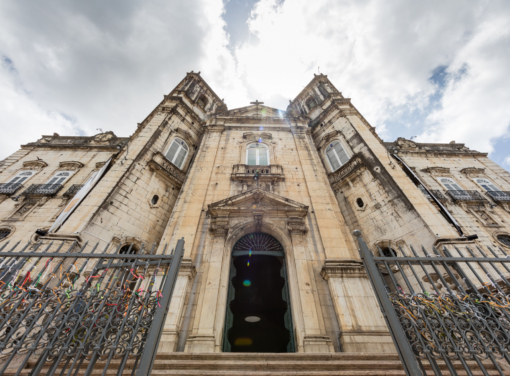 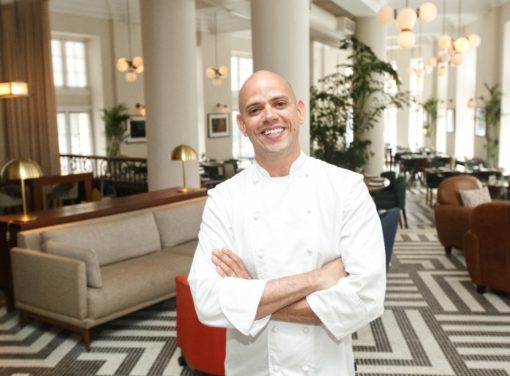 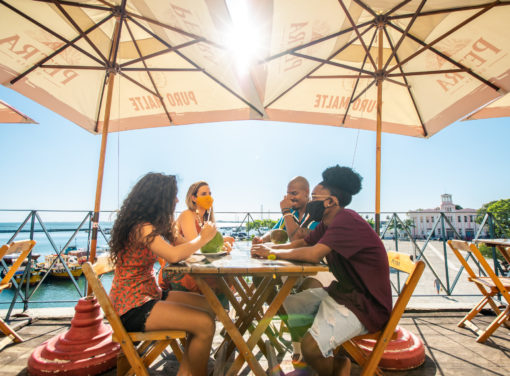 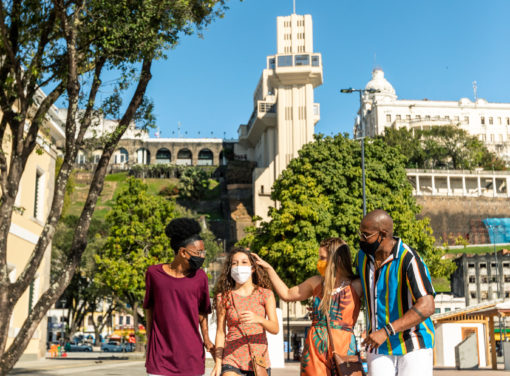 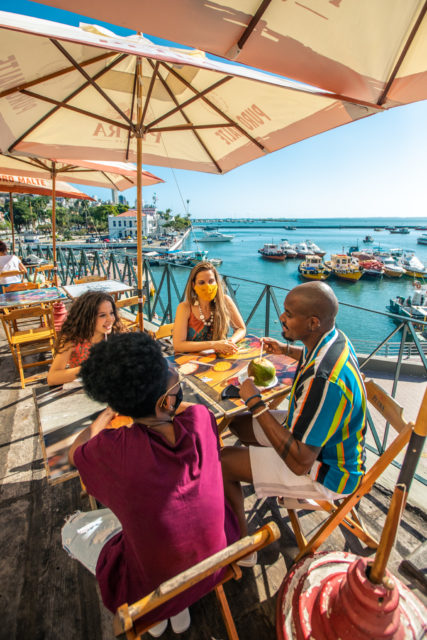 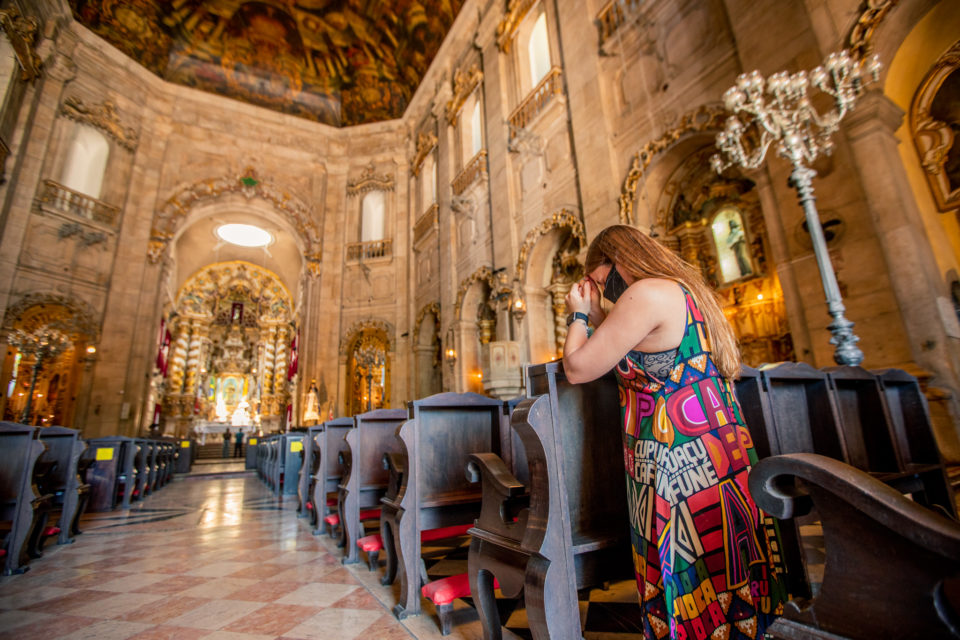 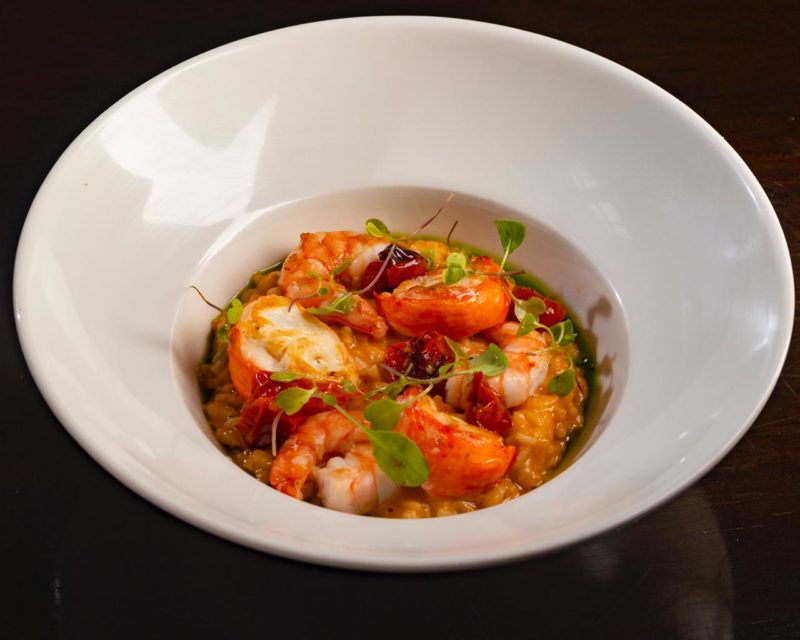 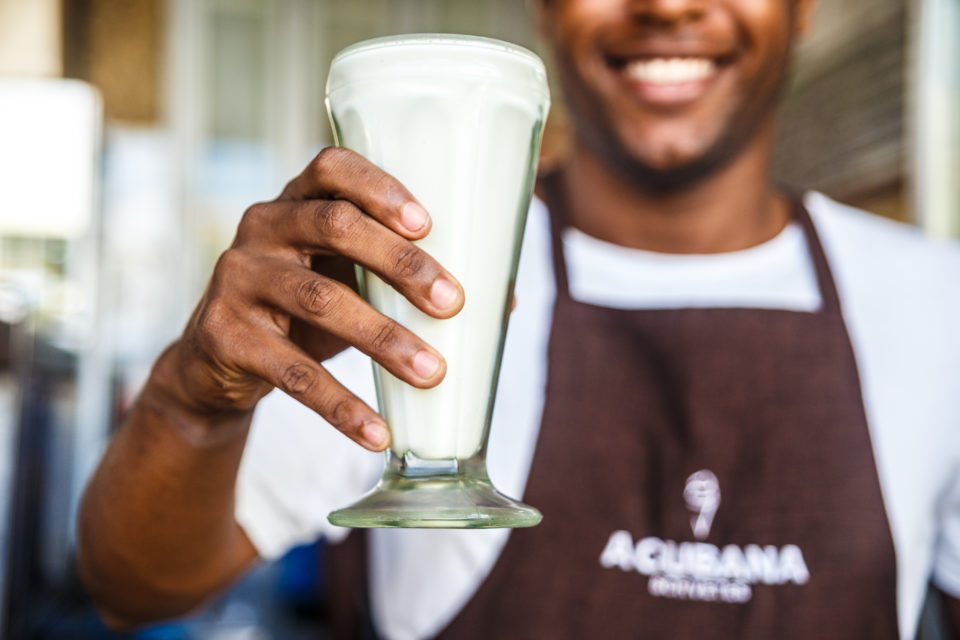 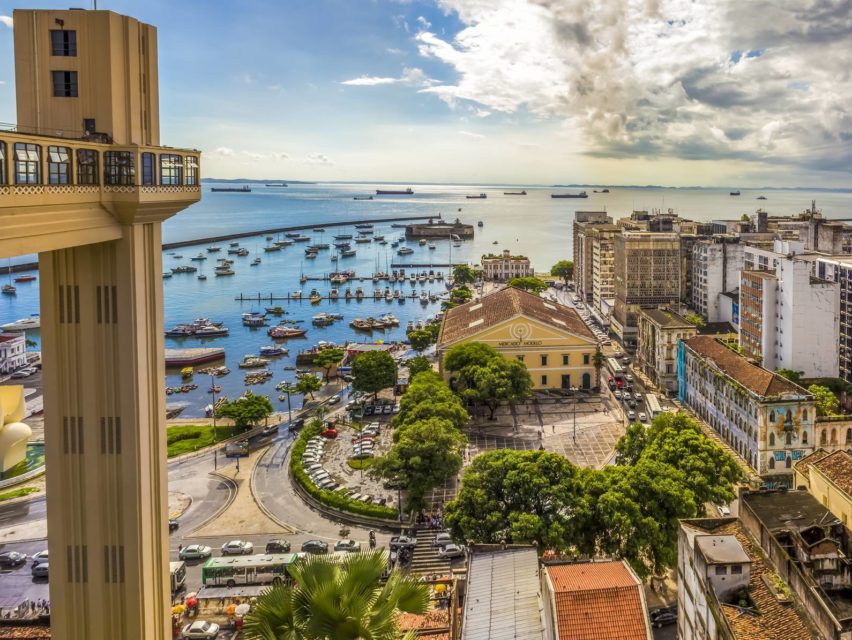 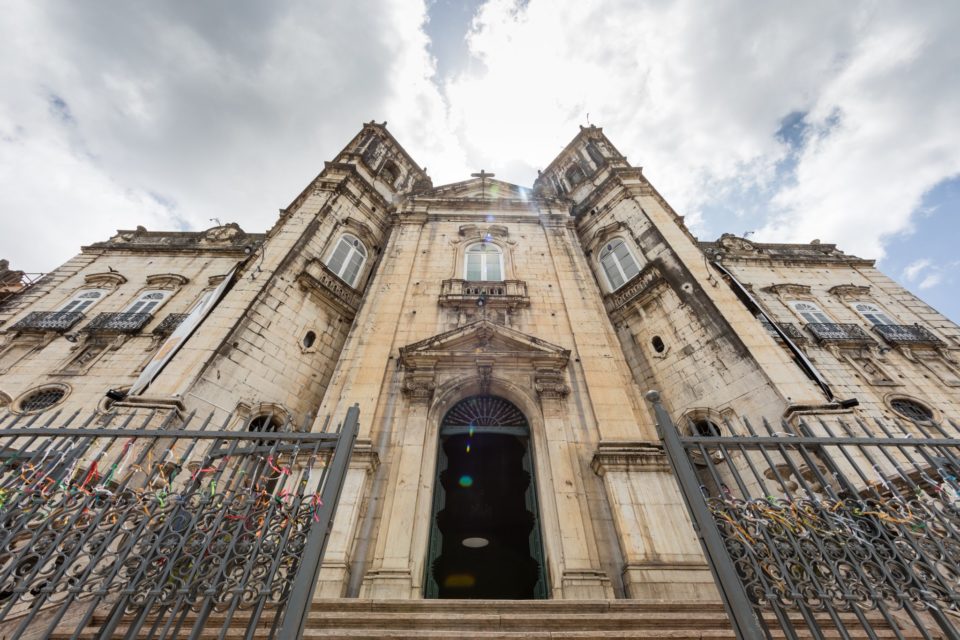 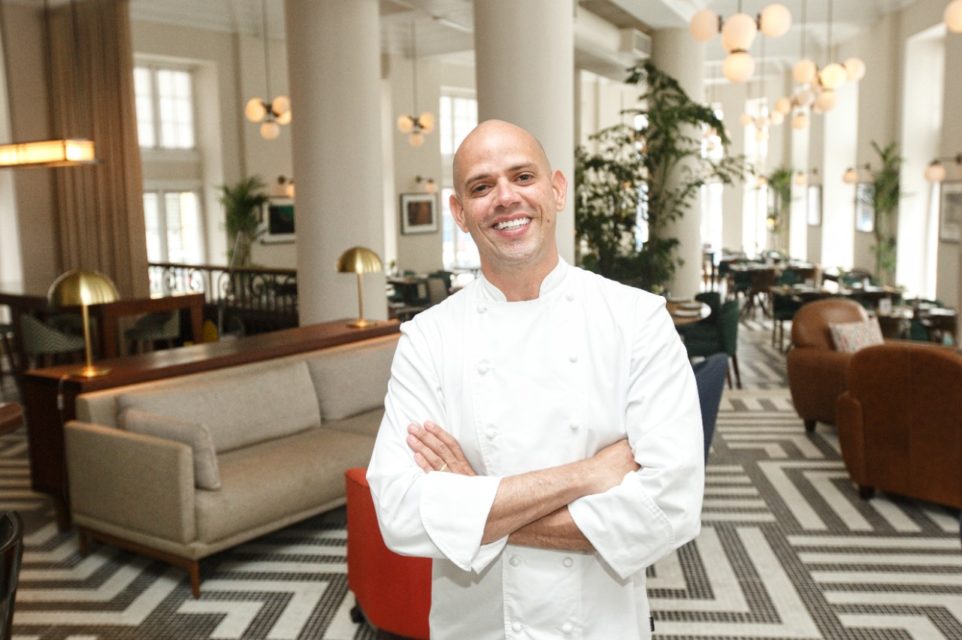 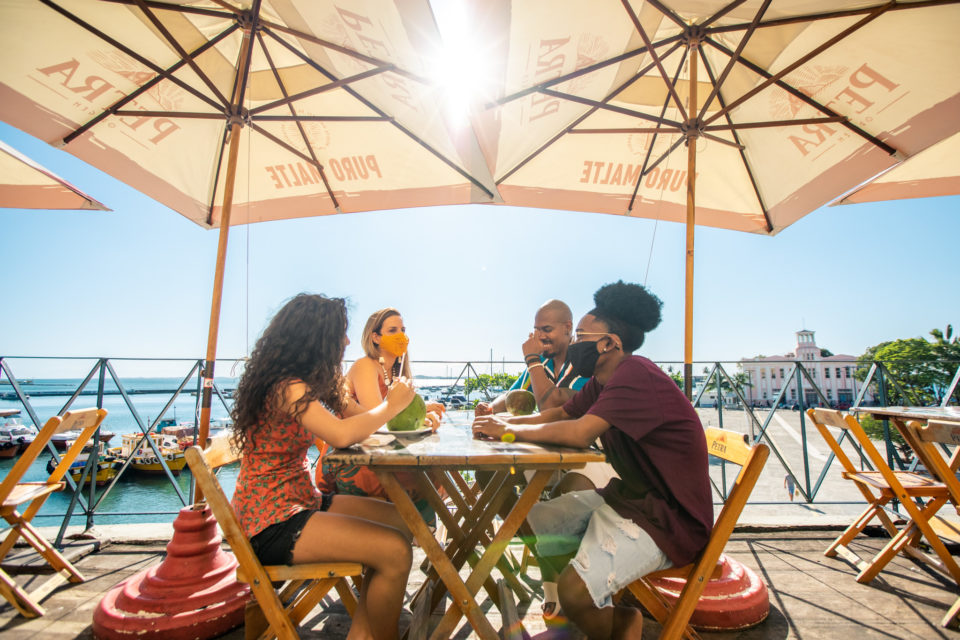 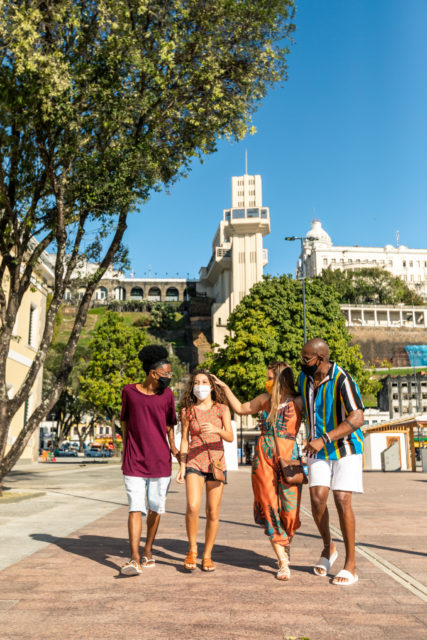