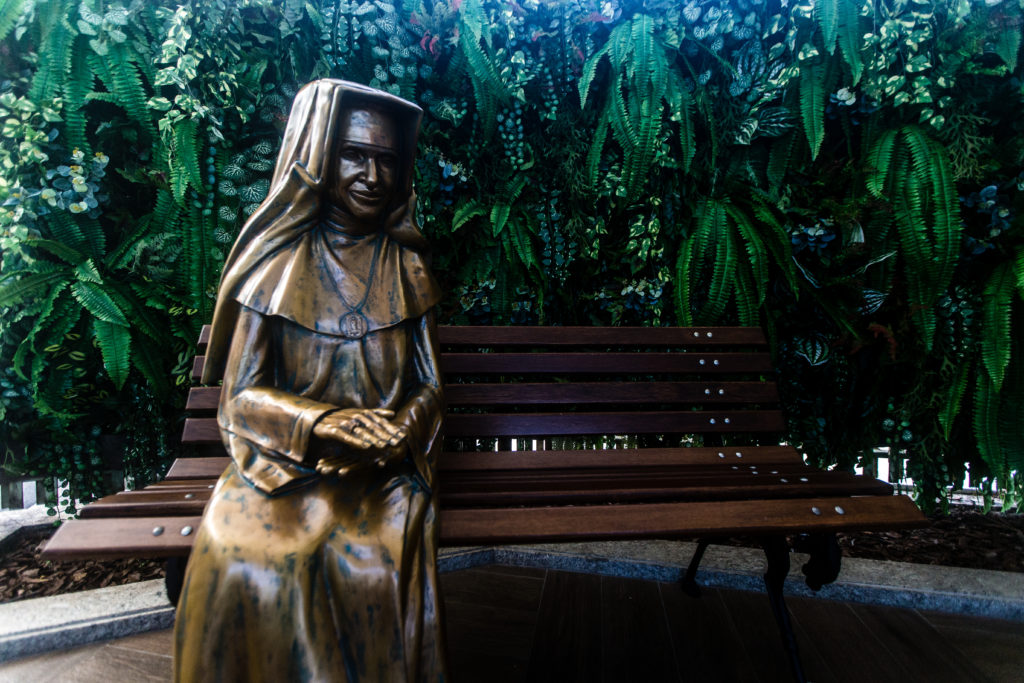 Santa Dulce of the Poor  was a hard-working woman, an example of life, also admired by non-Catholics. What she did was a true work of love for the poor and the sick. Always so dear and respected, she received encouragement from the people of Bahia, from Brazilians from different states, and from international personalities to build her work.

There are many stories of people that used to run to the window to see her pass by, or people who didn’t wash their hands for days after they have touched the nun. Dulce of the Poor was a hard-working, an inspiration for other people to battle for their dreams. It goes beyond a religious issue. It’s a humanitarian issue that transcends.

According to Archbishop Murilo Krieger, “…what characterizes Sister Dulce’s work is the love she placed in what she has done to those in need”.

Here, we’ve gathered 13 information about Saint Dulce of the Poor that you’ll love to know. From the origin of her name, her personal preferences, curiosities, trajectory and achievements, to her miracles that led her to be beatified and now canonized, as well as news that will make you want to go there to know her works closely.

1. Homage to her mother

Born in Salvador, Bahia, on May 26, 1914, she was baptized with the name of Maria Rita de Souza Brito Lopes Pontes. Later, in 1933, she entered the Congregation of the Missionary Sisters of the Immaculate Conception of the Mother of God in the Convent of Our Lady of Carmo in São Cristóvão (Sergipe). In the same year, she received the habit and adopted the name of Sister Dulce in honor of her mother, Dulce Maria de Souza Brito Lopes Pontes, who died at the age of 26 in 1921, when Sister Dulce was seven years old.

2. In childhood, what she really enjoyed was playing soccer

Born in Barbalho, in the community area of Santo Antônio Além do Carmo, the girl Maria Rita was a child full of joy, who loved to play doll, to fly kite, but what she really enjoyed was playing soccer. She was a fan of Esporte Clube Ypiranga.

She expressed an interest in religious life in early adolescence when, in 1927, at the age of 13, she was already assisting the sick people at her house gate. It was at that time that her house became known as “The San Francisco Gatehouse”, such was the agglomeration of unassisted people.

There is a very strong relationship in Sister Dulce’s life with the number 13:

· In 1933, in the state of Sergipe, she received the habit and religious name of Sister Dulce, on August 13.

· In 2010, on December 10, the Bahian nun was crowned as the first beata born in Bahia and became known as the Blessed Dulce of the Poor, being August 13 the official date for the celebration of her liturgical feast.

· In 2019 Sister Dulce was proclaimed Saint Dulce of the Poor by the Catholic Church on October 13, at a ceremony celebrated by Pope Francis at the Vatican.

5. The largest hospital in Bahia from a simple chicken house 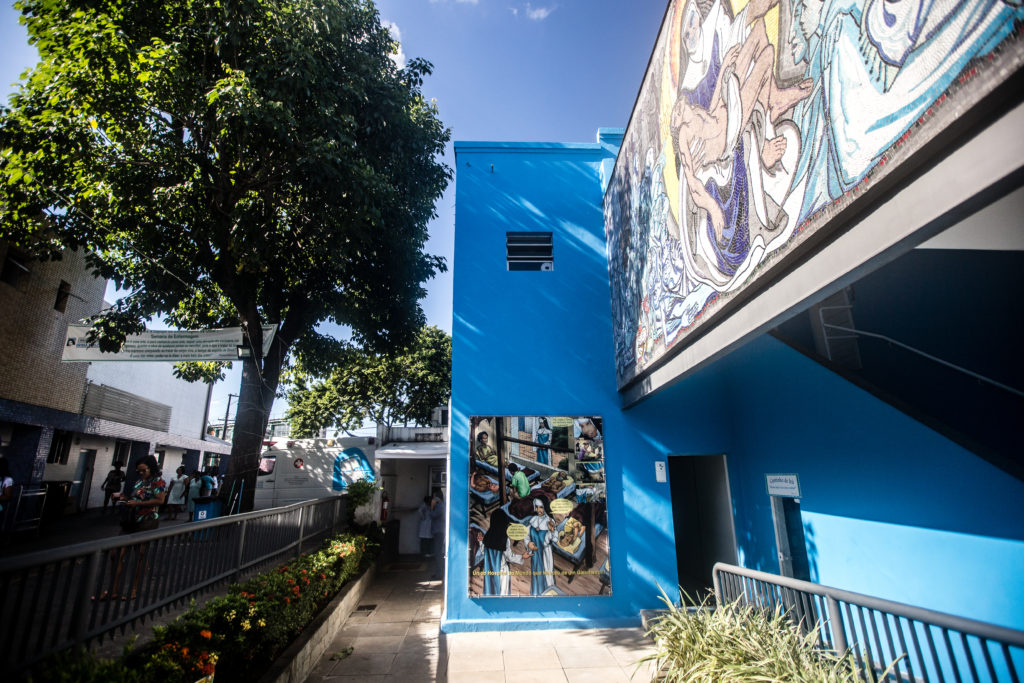 In 1939, Sister Dulce invaded five houses on Ilha dos Ratos, in a poor community of Alagados, a group of stilts that consolidated in the inner part of the Itapagipe neighborhood, to shelter sick people that she collected in the streets of Salvador. Expelled from the place, she pilgrims for a decade, taking her patients to different places in the city.

Finally, in 1949, Sister Dulce occupied a chicken coop next to the Santo Antônio Convent, after authorization from her superior, with the first 70 patients. The initiative gave rise to a famous story that has been propagated for decades by the Bahian people, telling that the nun built the largest hospital in Bahia from a simple chicken coop. In 1959, the Sister Dulce Social Works Association was officially installed, and the following year, the Santo Antônio Shelter was inaugurated.

With access by the Memorial, you can visit the place where the chicken coop used to be.

6. The visit of John Paul II

On Pope John Paul II first visit to the country, on July 7, 1980, Sister Dulce heard his encouragement to continue with her work. They would meet again on October 20, 1991, during the second visit of the Supreme Pontiff to Brazil.

John Paul II made a point of breaking the rigor of his agenda and went to the Santo Antônio Convent in Salvador to visit the Bahian religious woman, whose health was already greatly impaired due to respiratory problems. Five months after the Pope’s visit, the Bahians would mourn the Good Angel of Bahia’s death. 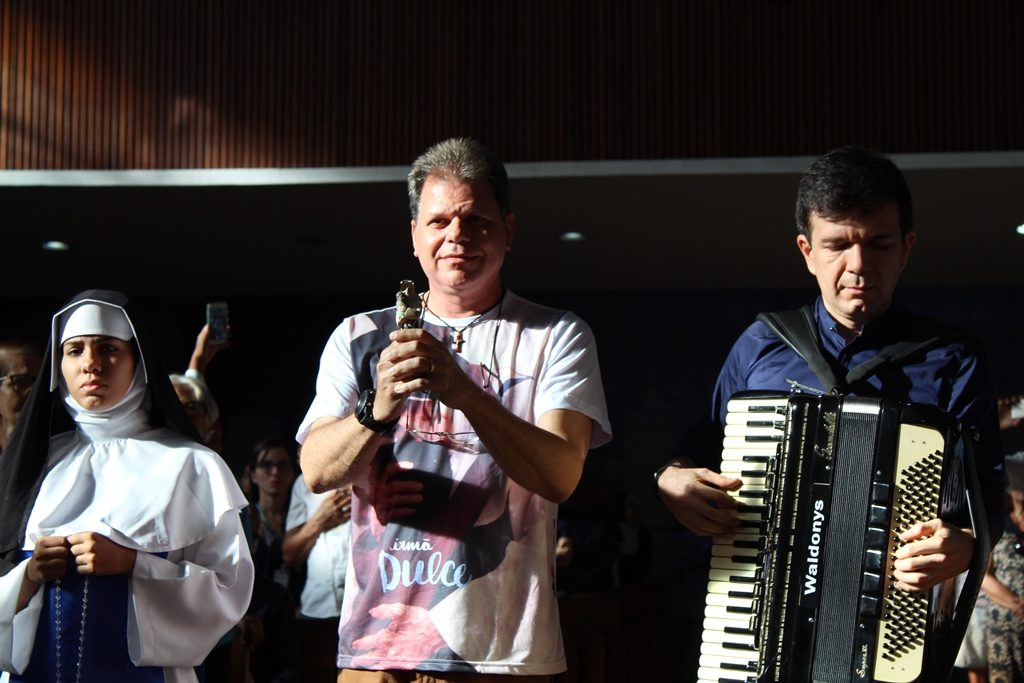 The Beatification and Canonization process began in January 2000. The reputation of holiness was recognized in 2009, when Pope Benedict XVI recognized the heroic virtues of the Servant of God, Dulce Lopes Pontes. On May 22, 2011, the nun was proclaimed as Blessed Dulce of the Poor. To receive the title of saint, it was necessary to confirm two miracles, a certificate for the process of beatification and another for the canonization.

The first miracle attributed to Sister Dulce occurred in the city of Itabaiana, in Sergipe, when, after giving birth to her second son, Gabriel, on January 11, 2001, Cláudia Cristina dos Santos suffered a heavy hemorrhage for 18 hours, being submitted to three surgeries at Maternidade São José.

Faced with the gravity of the situation, the obstetrician Antônio Cardoso warned Cláudia’s family that only “divine help” could save her life. In desperation, the girl’s family called Father José Almí to minister the anointing of the sick. The priest, however, decided to make a chain of prayer requesting the intercession of Sister Dulce and gave Claudia a small relic of the Blessed Sister.

The bleeding stopped abruptly. Cláudia’s case was analyzed by ten Brazilian medical experts and six Italians. According to the doctor Sandro Barral, one of the members of the scientific committee that analyzed the miracle, “no one could explain the reason for that improvement, so quickly, in such an adverse condition”.

The miracle went through three stages of evaluation: a meeting with medical experts (who gave the scientific endorsement), with theologians, and finally the final approval of the cardinal college, having its authenticity recognized unanimously at all stages.

Born in Salvador, Maurício was diagnosed, at the age of 22, with a very serious glaucoma, discovered late and already in an advanced state. The treatment, which lasted ten years, was not enough to prevent the optic nerve – responsible for communicating with the brain – from being destroyed. Thus, at the turn of the year 1999 to 2000, he was totally blind in both eyes and remained so for over 14 years.

In 2014, already living in Recife, Maurício had a very severe conjunctivitis and, suffering in severe pain, took the image of Sister Dulce who had belonged to her mother, put her over her eyes and, with great faith, prayed for intercession of the Good Angel to ease the pains of conjunctivitis.

“When I woke up, I began to see my hand. I understood that Sister Dulce had performed a miracle. She gave me much more than I asked: I saw again”, recalls Maurício.

The second miracle validated by the Vatican went through the same stages of the first one, having its authenticity equally recognized unanimously at all stages.

In Salvador, there are three emblematic churches that Sister Dulce’s devotees will get very excited about. The Church of Our Lady of the Alagados is very close to Ilha dos Ratos, where it all began in 1939. It’s the only place where you can find first degree relics of 3 saints: Pope John Paul II, Mother Teresa of Calcutta and Sister Dulce. The second is the Church of Our Lady of Conceição da Praia, where Sister Dulce’s funeral was held and the first place where her body was buried, before staying definitively in the Sister Dulce Sanctuary. The third one is the Sanctuary itself, which is also next to the Memorial, a must see for anyone who wants to know the history of this religious.

9. Quotes, Thoughts and a Radio Program

Sister Dulce’s quotes and thoughts became famous. There are always those who remember a phrase from her. Another interesting information is that reflections inspired by the life lessons of the Good Angel of Bahia are the basis for the radio program “Irmã Dulce Hoje” (Sister Dulce Today), which airs from Monday to Friday, from 3:40 p.m. to 3:50 p.m., by the Excelsior Network ( FM 106.1 and AM 840).

“Whenever you can, speak of love and with love to someone. It’s good to the ears of those who hear and to the soul of those who speak.”

10. Dulce will become the first saint born in Brazil

There are several Brazilian saints that cover not only those born in the national territory, but also the foreigners who, sent on mission, died on the way or in territory that geographically belongs to Brazil. When they were canonized by the Roman Catholic Church, they were also considered Saints of Brazil.

This is the case of Santo Antônio de Sant’Ana Galvão, Frei Galvão, known for the miraculous pills that, according to the Catholic faith, have healing power. He was the first saint born in Brazil to be canonized on May 11, 2007 by then Pope Benedict XVI. Frei Galvão was born in 1739, in Guaratinguetá, in the interior of São Paulo.

11. But how is a grace considered a miracle?

A grace is considered a miracle only after it meets four basic points: instantaneity, which ensures that grace was achieved immediately after the appeal; perfection, which guarantees the complete fulfillment of the order; the durability and permanence of the benefit and its preternatural character (not explained by science).

Everything you see in Sister Dulce’s Social Works are already miracles themselves. Also known as Complexo Roma, the works headquarters in Salvador houses, in its more than 40 thousand square meters of built area, 20 of the 21 nuclei of the entity, including 954 hospital beds for the care of clinical and surgical pathologies.

Still in Bahia’s capital, at the Social Works headquarters, a place that serves about 2,000 people daily, 12,000 surgeries are performed per year, in addition to 18,000 hospitalizations.

The Mass in honor of the saint was held on October 14 at 10:00 a.m. in the Church of St. Anthony of the Portuguese, a 17th century building in Rome, in appreciation for Sister Dulce’s gift.

The celebration in Brazil, in Salvador, took place on October 20, at 4:00 p.m., and gathered the nun’s devotees and admirers, at Arena Fonte Nova.

Special thanks to the Communication Department / Sister Dulce Social Works, Adriana Patrocínio and Lorena Amorim, for all the sent material.