Symbol of faith and also of good memories lived in Salvador. Learn all about Brazil’s most beloved ribbons 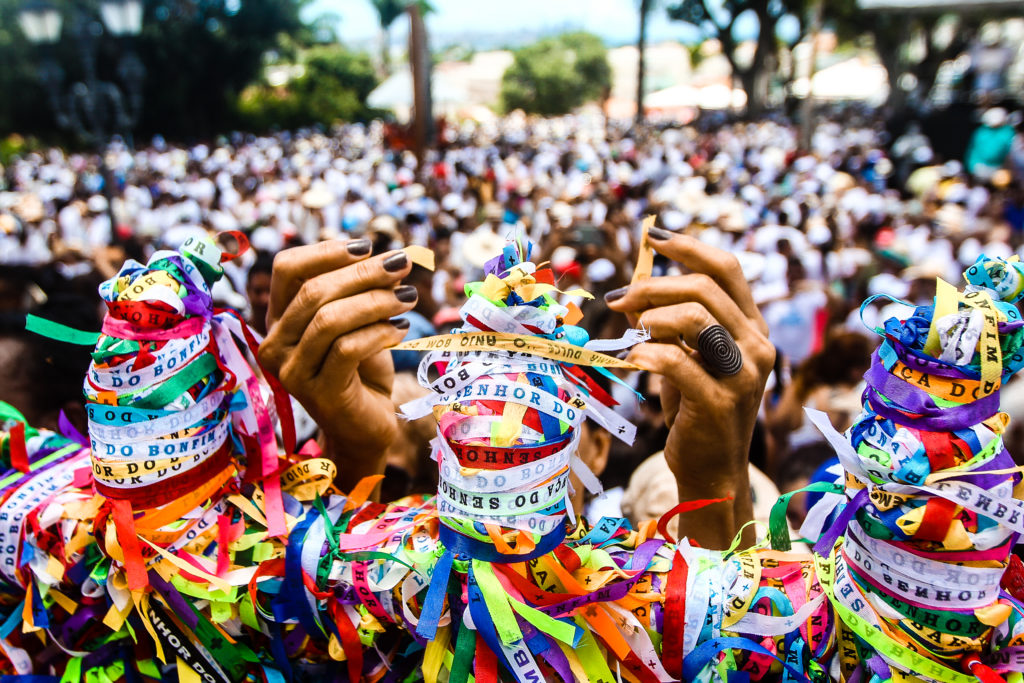 Made of cloth, nylon and even acetate. The Bonfim ribbons have undergone a transformation throughout history, but they remain a symbol of Salvador and the faith of Bahians and tourists from “Senhor do Bonfim”. No wonder, they are scattered throughout the city and, of course, throughout the state. When someone visits the capital of Bahia, it is quite common to leave with a ribbon tied to the wrist or ankle.

It is also one of the favorite souvenirs not only by tourists, but also by the people of Salvador. After all, much more than a way to remember the trip, the item is synonymous with faith and tradition and has the power to make three wishes come true, according to popular belief. Another interesting thing is that the ribbon is relatively inexpensive and easy to transport – you can buy a big roll, put it in your suitcase and give it to a lot of people while spending little.

But do you know when these souvenirs came up? What does each color mean? And where are the ribbons made? How to use them? Thinking about it, we have chosen 10 stories and curiosities about the Bonfim ribbons that will make you want to come to Salvador even more when this is all over. Find out below.

1 ● Make two turns around, tie with three knots and make the wishes 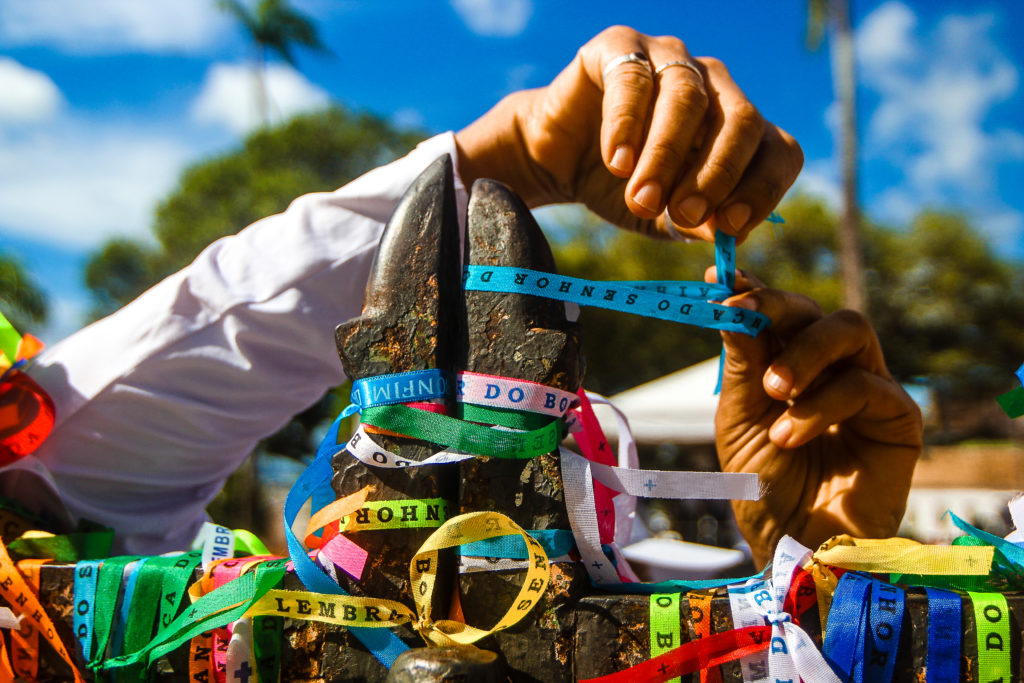 Do you want to fulfill any will or dream and don’t know how? Faithful believe that the Bonfim ribbons carry the power to fulfill three wishes when they break. They are usually tied on the wrists, ankles or bars of churches in honor of the saints of each. The greatest example of this tradition is the Basilica of Senhor do Bonfim, in Salvador, which is full of colorful ribbons throughout the year.

The popular belief says that the person who will use the ribbon should put it around the wrist twice and tie with three knots. One wish is made for each of the nodes. Important: do not go around telling your wishes. It is necessary to keep secret so that wishes are fulfilled. Oh, and hold on to anxiety! The wishes only come true when the ribbon breaks on its own. In other words, there is no point in cutting it or forcibly pulling it out, see?

2 ● The Bonfim ribbon was created in the 19th century

Anyone who thinks that the Bonfim ribbons are a recent tradition is wrong. The first records of the Bonfim ribbon are from 1809, more than two centuries ago. It was created by the treasurer of the Devotion of Nosso Senhor do Bonfim, Manoel Antônio da Silva Serva, with the objective of obtaining resources for the church in the 19th century. Manoel was a bookseller, editor and printer – he was the one who founded the first printing company in Bahia.

Since the Devotion was founded in 1745, it has maintained the Basilica of Nosso Senhor do Bonfim, a church located in the Bonfim district of Salvador.
When the Bonfim ribbon came up, it didn’t even have that name. It was known as “Medida do Bonfim” (Measure of Bonfim). This name was precisely because it measured 47 centimeters in length, the size of the right arm of the statue of Jesus Christ, Senhor do Bonfim, who is in the basilica.

At that time, the “medida” was between six and seven centimeters wide. It was white, made of cotton or silk, with the design and name of the Saint embroidered by hand. The finishing was done in gold or silver paint, like gold threads.

According to historical records, after having undergone some changes, the Medida do Bonfim disappeared in the early 1940s. 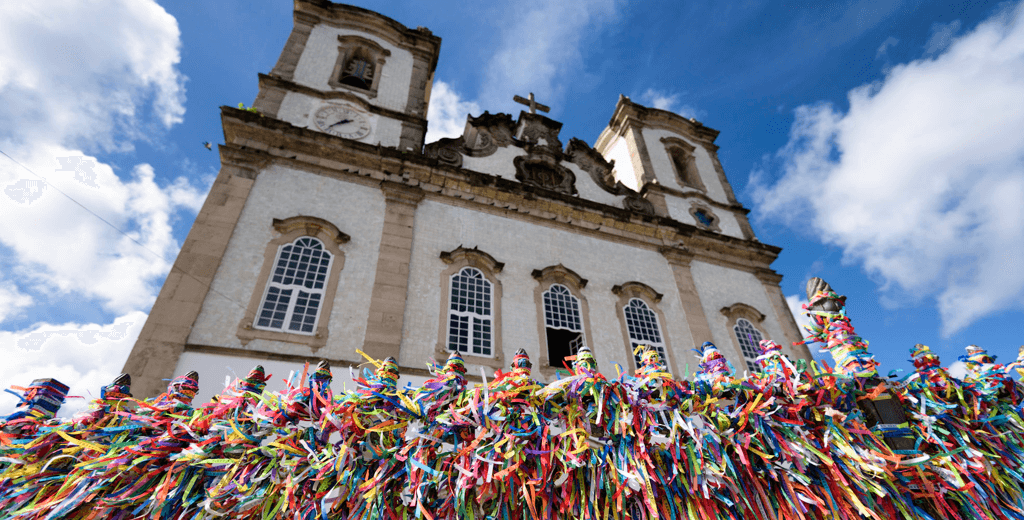 Unlike what happens today, in which the ribbon is commonly used on the wrist and ankle and / or tied to the railing of the Church of Bonfim, the Medida do Bonfim was used on the neck, like a necklace. In it, medals, saints and pendants were hung, representing the grace achieved with the help of the Saint. To fulfill a promise, the believer carried a photo or wax sculpture representing the body part healed with the help of the Saint.

Other researchers say, however, that the ribbons originated before that.

In an interview with the newspaper Correio*, journalist and researcher Nelson Cadena stated that the medidas have always existed in the Catholic Church and that they were not exclusive to Senhor do Bonfim. They would have come from Portugal and became common in all religious festivals in Bahia, like “Nossa Senhora da Conceição” and “Nossa Senhora das Candeias”.

Cadena claims that they were made of silk and resembled a stole. The most common thing was to see people with the “medidas” on their shoulders or in hats, in the case of women.

“It was discovered that there was another document, from 1804, that already spoke of the ribbons in the brotherhood of Bonfim itself. So, it cannot be said that it started in 1809”, he points out.

Regardless of the version of the story, this lasted until around 1940, when the medidas disappeared completely.

The first records of the Bonfim ribbon we know today are from the mid-1950s. In that decade, ribbons were already sold as souvenirs on the streets of Salvador. The tourism industry, incidentally, was the main responsible for the emergence of the current ribbons – disseminated, since then, as a differentiated prop and with the power to perform miracles. At that time, there were people who believed that the ribbon should not be bought, but given as a gift.

It was there that the tradition of the three wishes emerged, imported from other countries. And even the public administration itself contributed to keep this tradition of ribbons alive, through the dissemination in major magazines, such as Cruzeiro and Manchete.

This way, “Lavagem do Bonfim”, which has always had great strength in Bahia, gained even greater visibility. In place of the “Medidas do Bonfim” – which used to be used in Catholic festivals in Salvador – today, faithful, clergy and representatives of other religions use the Senhor do Bonfim ribbons created at the end of the 20th century as an amulet.

5 ● Symbol of the Bonfim Church 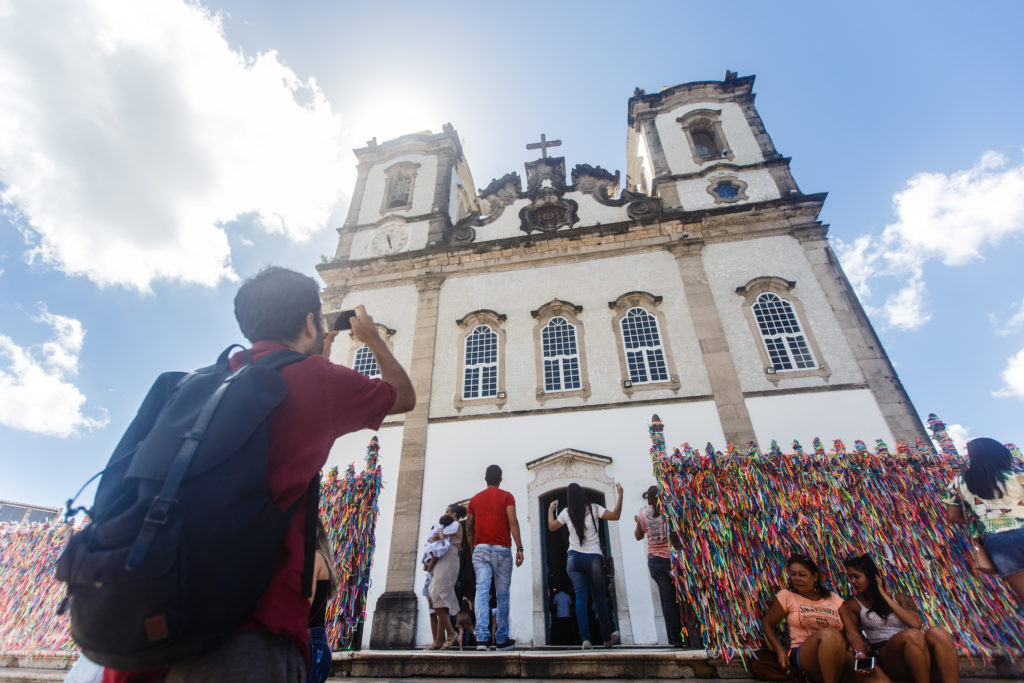 In addition to being a symbol of Lavagem do Bonfim – a popular party that has been going on for almost 250 years in the capital of Bahia, always on the second Thursday of January – the Bonfim ribbon is almost synonymous with the Senhor do Bonfim Church, one of Salvador postcards.

When you come to the land of all saints, charms and axé, the Church is a mandatory stop – explore various angles of the staircase and take the opportunity to tie your ribbon and place your three wishes. Until that day arrives, think about your wishes, ok?

The Basilica, however, no longer sells the ribbons. But, most likely, if you don’t take yours, you can buy it from a street vendor.

Every three or four months, all the ribbons that are tied to the Church’s bars are burned in a Catholic ceremony to make room for new wishes and ribbons.

6 ● Each orixá is represented by a color

Despite being a tradition that began in the Catholic Church, like everything else in Bahia and Salvador, the Bonfim ribbon is also a strong symbol of local religious syncretism.
The accessory also represents the typical African roots of Bahia and is considered by many to be an amulet. Sold in different colors, each ribbon represents an orixá. Look:

It is worth mentioning that many of the candomblé orixás have a symbolism close to the Catholic saints: Nossa Senhora da Conceição approaches Yemanjá; Santo Antônio, Ogum; and Senhor do Bonfim, Oxalá, for example.
According to Candomblé beliefs, in addition to representing African strength and spirituality in Bahia, ribbons can be used in decoration. Using the colors can help to have your wishes fulfilled.

7 ● Decoration: it is printed in objects all around the world 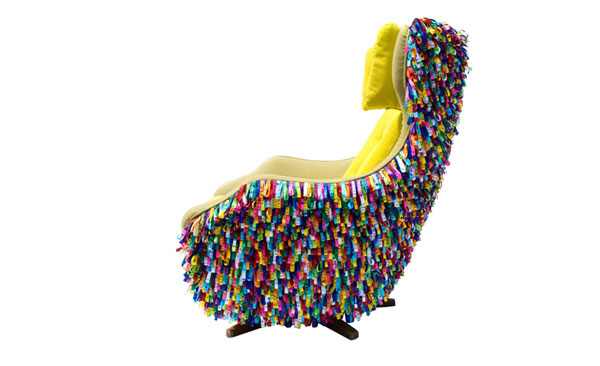 Even if you don’t live in Salvador, you’ve certainly seen clothes, wallets, mugs, blankets, bags, key chains and many other items and objects, such as bath towels and T-shirts, with the Senhor do Bonfim ribbon print. Since they became popular, these colorful ribbons never go out of style.

The colors of the item, which bring joy, can help compose an environment that needs stimulation – such as the kitchen, for example. Placemats, napkins, dishrags, trays, salt shakers, pots and containers can be found in this print.

Including Senhor do Bonfim ribbons in the decoration is a trend worldwide. International designers are inspired by this accessory to create furniture and pieces. The Italian design studio 20age, for example, created a Senhor do Bonfim armchair using a large amount of ribbons to finish the armchair, which was a success in exhibitions, stores and decoration magazines.

8 ● Ribbons inspire even the luxury market

As the creation was not patented, there are several reproductions and variations, including versions made with precious stones. 16 years ago, the jeweler and designer from Bahia, Carlos Rodeiro, created the Senhor do Bonfim bracelet. The jewel, with an estimated value of R$ 6 thousand, has pure gold versions even with details in diamonds, sapphires, rubies and emeralds.

Since its launch, the accessory has won a renowned clientele. This is the case of the top models Gisele Bündchen, who surrendered to the white gold model, and Naomi Campbell; the singer Elton John; Princess Stéphanie of Monaco, who bought a yellow gold version at the Paris store; actress Deborah Secco and digital influencer Thássia Naves. The model is part of the Sacra collection, which reinvents symbols of popular faith.

Whether in the case of objects, prints or jewelry, some scholars believe that these reproductions of the amulet mischaracterize the original meaning of the ribbon, which loses its identity as it is inserted in other cultures and adheres to other formats and uses. On the other hand, some argue that these new features help to preserve and expand the genuine symbolism of the accessory.

9 ● Inspiring events across Brazil and the world

With the popularization of ribbons and Lavagem do Bonfim, the colorful items began to inspire other parties, religious and pagan, around the world. Salvador, due to the tradition among citizens and tourists, is one of the cities that most buy the item. But, another Bahian city that has many interested people is Bom Jesus da Lapa, in Vale do São Francisco.
Still in Brazil, the city of Nova Era, in Minas Gerais, uses the ribbon in honor of the patron saint São José da Lagoa. São Paulo and local manufacturers also commonly receive orders from countries like Germany, the United States and Canada.

10 ● Made of cotton or polyester

Although they were made of silk and cotton in the 19th century, today nylon and synthetic ribbons dominate. In the 1960s, many were made of acetate. Currently, the ribbons are made of polyester, the most resistant material.

In 2013, after 20 years, the souvenir was made again in Bahia. Here, the material is cotton, which deteriorates and makes wishes come true faster. Those that are manufactured in São Paulo, however, are still made of synthetic material or nylon.

A roll with 100 ribbons purchased directly from the manufacturing companies costs around R$ 12. In tourist spots in Salvador, such as Largo do Bonfim and Barra, packages with 10 ribbons are available for R$ 2. Before buying it, check if the item is the official size – which can usually vary between 44 and 50 cm. Some vendors usually offer smaller versions, approximately 30 centimeters, to make the cost cheaper, which is outside the traditional standard.